The History of Swimwear 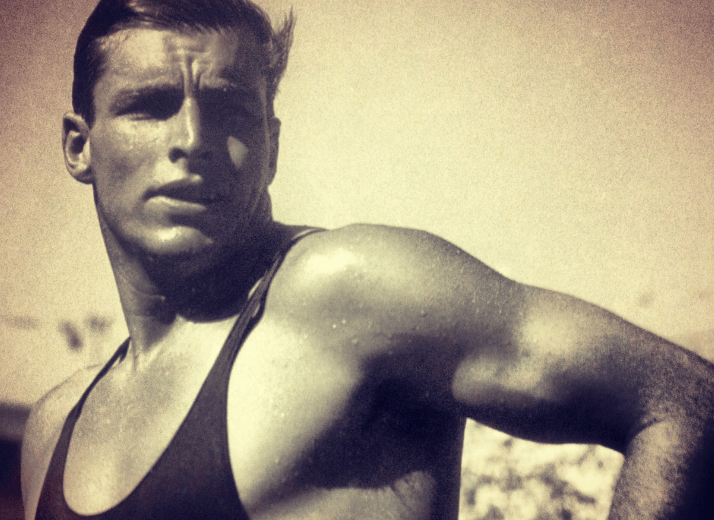 "Wool was virtually the only fiber that was available. While cotton was a booming business at the time it creates a denser fiber than wool and does not have any of wool’s natural water-repelling capabilities." (Image: Buster Crabbe, 1932 Olympic gold medalist, 400m freestyle) Stock photo via StockImages

Swimsuits, as we know them, are relatively new inventions. The strict Victorian sense of propriety kept both men and women from disrobing if they went swimming in public, but huge, voluminous skirts and the tight woven fabrics of the time were hard to move in when waterlogged. Enter knitted swimsuits!

Knitting produces a much more flexible fabric than weaving. This is because it is a series of interlocking loops of yarn rather than the flat cloth created by weaving thread at right angles.  Knit fabric could cling to the wearer in all the right places and spring back into shape once it dried out. This isn’t to say, however, that it was the perfect solution in and of itself.

What materials existed in the 1800s for people to knit into bathing suits?

Wool was virtually the only fiber that was available. While cotton was a booming business at the time it creates a denser fiber than wool and does not have any of wool’s natural water-repelling capabilities. A bathing suit made of cotton, even if knit into a very tight fabric, would likely sag on the wearer once it got wet. Also, cotton required intense labor to produce and refine and grew mainly in hot climates, whereas sheep could graze with relative ease in many places around the world (so long as predators were thwarted) and be shorn annually, yielding a “crop” of wool that could be processed either by hand or at a spinning mill, an industry that had helped jumpstart the Industrial Revolution. Later, knitting mills took the product of spinning mills (yarn) and used large machinery to create knitted fabric and garments.

In fact, Speedo began as a knitting mill. MacRae and Company Hosiery was founded in 1910 and manufactured knit socks and stockings. WWI created sudden demand for socks for the Australian Army and MacRae did so much business that it was able grow and to offer its first line of knit swimwear in 1927. MacRae designed a new swimsuit style called the “racerback” and asked staff to partake in a naming contest. Captain Parsonson submitted “Speed on in your Speedos” and though Captain Parsonson won only £5, the MacRae Knitting Mills won a new brand name, swiftly rechristening itself the Speedo Knitting Mills.

Speedo quickly established itself as a forerunner of swimwear technology. The suit that Clare Dennis won the Women’s 200 Meter Breaststroke in at the 1932 Los Angeles Olympic Games was in fact made of silk, not wool. This lighter fiber was far more expensive than wool but allowed for competitive swimmers who could afford it to slice through the water with less drag than wool swimsuits. But what if you were not a competitive swimmer? What if you and your family simply wanted to go on holiday and enjoy time at the beach?

If you could afford to go on holiday at all you might also have been able to buy a store-bought swimsuit, though perhaps not a top-of-the-line suit like a Speedo. However, it’s very likely that your family could have hand knit your bathing suits. By the 1930s hand-knitting was becoming a more popular hobby once again and was one way to make affordable yet fashionable clothing at home. Young women in particular, if they were talented knitters, could copy styles they saw in magazines and hit the waves in trendy colors and patterns they had thriftily made themselves.

Mothers (and fathers!) who knit could easily provide young children with swimsuits as well as make their own. The accomplished knitter had to take several different factors into account when knitting a swimsuit. Susan Crawford outlines these features on the page dedicated to her “Knitted Swimsuit Project”

A knitted swimsuit had to fit tightly to the wearer’s body or the extra fabric would bag and sag in the water – negative ease means that the suit has to stretch in order to fit the wearer’s body. It had to be able to recover its shape once out of the water. A knitted swimsuit had to provide enough coverage that one wouldn’t get kicked off the beach or arrested for indecency (let alone embarrassed by a rogue top) and it had to be flexible enough to allow easy movement in the water.

These same principles are integral to machine-made swimsuits today. The advent of nylon, Lycra (spandex) and other man-made materials allowed both competitive and casual swimwear to cling to the body and slice through water more easily than ever before. For the intrepid hand-knitter, however, these design features must be carefully planned if you want your vintage-inspired bathing suit to fit properly and look good.

Believe it or not plenty of hand-knitters still want to try their hand at knitting swimsuits. Susan Crawford’s designs prove that knitters today are just as adventurous as they 80 years ago. But just how well does a hand-knit swimsuit hold up in the water? Is it comfortable? Doesn’t sag or let that huge rush of water out when one steps out of the water? Crawford herself has gathered some knitted swimsuit stories, including her own father’s tale of a horrible and ill-fitting suit he had to endure as a boy.

To see a knitted wool swimsuit in action check out the BBC4’s Fabric of Britain special. While this feature covers the wide history of British knitting, it has a segment in which one of Susan Crawford’s designs is worn in the sea by a brave model, Fleur McGuerr. Spoiler: it held up beautifully! Although McGuerr could hardly spend the very chilly day running around and jumping in and out of the water, the swimsuit maintained its shape and coverage even after a thorough dunking.

Hand-knitters often have an appreciation for the history of knitting, even of the machine knitting done by mills like Speedo’s original facilities. These mills and their machinery were technological feats that allowed knitwear to be made affordably, creating knits that could be both hard-working staples of the average person’s wardrobe and, simultaneously, expressions of the some of the 20th century’s most iconic fashions. While Speedo has long since pushed swimwear technology past the bulky wool suits of yore, the fascination with swimwear and knitwear history remains strong.

I agree wholeheartedly! I knitted a one-piece swimsuit that appeared in Sports Illustrated Swimsuit 2013. It is inspired by Irish fishermen’s sweaters. Google it! -Kate Preston

My knitting side is pleased with this article. And knitted suits are pretty darn awesome. I’ve done a few – though more along the line of bikini wear than 1930s stuff. 🙂

I’m surprised yet almost relieved this article did not approach the suit singularity of 2009.