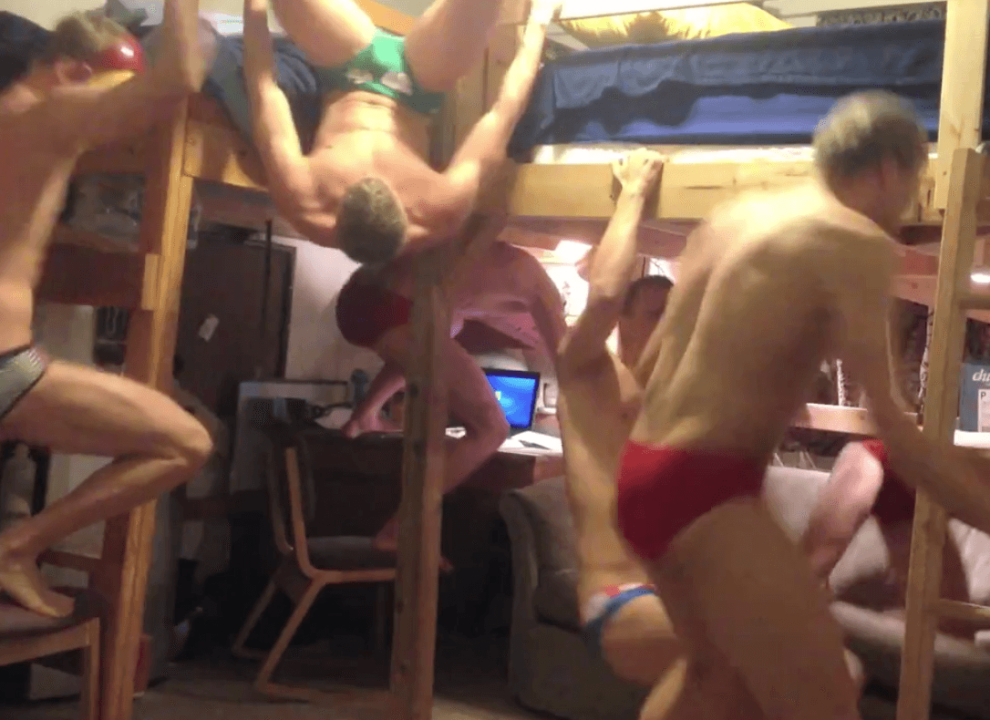 Don't hit play on all of the videos at the same time. It might Shake you back to 1981, when this dance craze started.

What we know so far about producing a GREAT Harlem Shake video:

1. It appears participation is key to your team’s success. You want big numbers, a lot of swimmers doing the Harlem Shake.

2. Each swimmer must have their own genuine Harlem Shake style. You must groove to your own beat and go for it. There’s the floor wiggle, the hanging wiggle, the handstand wiggle, the lazy hip pump, the frantic hip pump, and the out-of-beat shake.

3. Costumes appear to help as well. If you do not have a gorilla or horse mask, swimmer-esque costumes seem to do the trick.  Use a snorkle, a swim cap over your face, or a towel swirled on your head…etc.

4. The University of Tennessee got it right when they had one Harlem Shaker holding a UT Swimming Banner in the center of the video. School pride is a must!

5. The pre low-key groove before everyone unleashes must be absolutely causal…tongue in check, however. Don’t just stand and stare blankly while that one person dances. Act like you’re reading a book (something ridiculous like 50 Shades of Grey or Sun Tzu’s Art of War), or shaving your legs, or applying a facial cosmetic mask or zit cream.

6. This might be thinking outside of the box, but the first team to incorporate their coach may capture the entire coaching community audience. Could be a bad idea, however. Depends on the coach.

University of Tennessee Swimming and Diving, via captain Ed Walsh, was the first:

Then, the flood gates opened. The Georgia men sit in the headline right now, props for being underwater. They weren’t the first underwater video, however. That title goes to Incarnate Word in San Antonio, a Division II team.

About Half of these videos have Santa Hats, including this one from Carthage College

Lifeguard Buoys are not toys, but UMBC sure is having fun with them

We Have Confirmed a large portion of this group is the Western University swim team, including the guy in the red pants popping and locking on the penguin:

Wisconsin-Milwaukee wanted to win the SwimSwam Shakeoff so badly, that they talked the Athletic Department into letting them use the Mascot:

There are all kind of goodness in this gem from Brandeis. Focus on the details….

The team at Tufts was snowed in all weekend from Winter Storm Nemo. At least they found something productive to do.

No Cats were harmed in the making of this shake…that bear might not have made it though. University of Tampa

Missouri S&T Makes creative use of their dorm furniture

Who’s was the best? Vote below. We’re almost positive we’re going to get more submissions, so keep them coming, and we’ll post round 2 later in the week.

The Carthage College coaches are in fact the stars in the beginning of that video! They just look young. Looks like we win #6 🙂

Carthage kicks that vid off with their coaches!