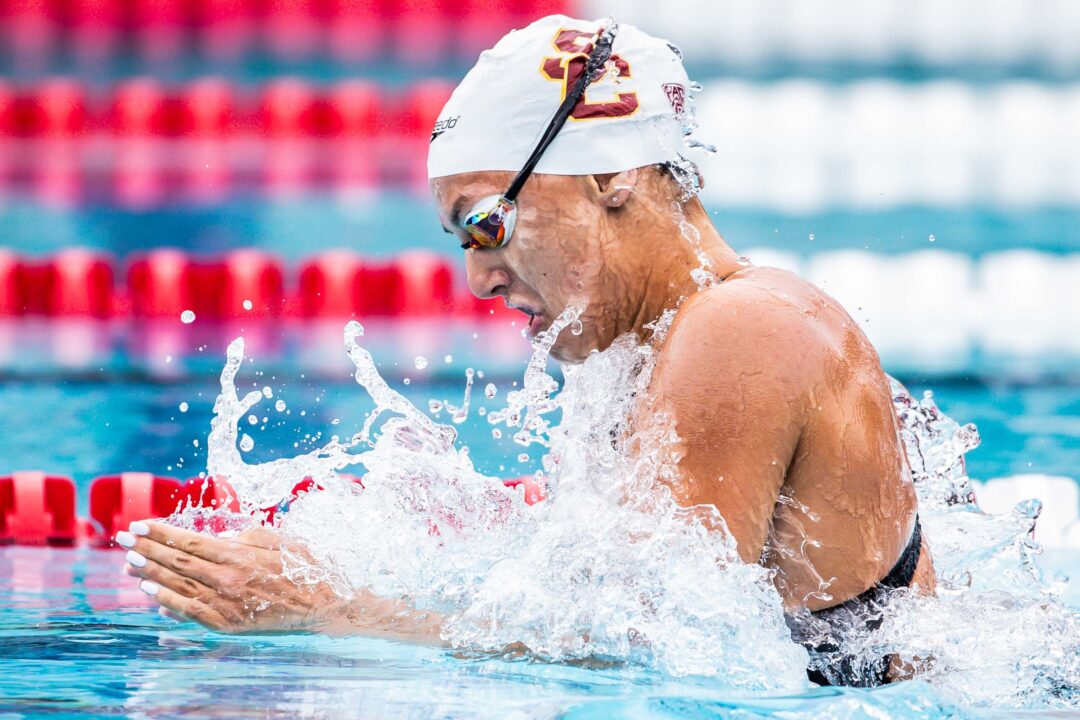 USC's Isabelle Odgers (pictured) was the top points scorer on the women's side of the meet, racking up a total of 52 individual points. Archive photo via Jack Spitser/Spitser Photography

On Saturday, the second half of the SMU Classic took place, with the 200 medley relay, 500 free, 200 breast, 200 back, 100 free, 200 fly, 200 IM, and 200 free all being contested. This meet features eight of the top teams in the country, and follows a unique format in which each team can only send eight swimmers and one diver. In addition, each event has an ‘A’ final and a ‘B’ final where all the teams are allowed one swimmer in each final. Swimmers can swim up to three events per day.

The Texas men won the men’s competition in dominant fashion, beating out runners-up Texas A&M by 42 points. On the women’s side the race was much closer, as USC women but Michigan and Louisville (which was negatively impacted by a DQ in the 200 medley relay) were not far behind.

Carson Foster‘s 64 points made him the top individual scorer on the men’s side, whereas Isabelle Odgers‘ 52 points have her leading the women’s side.

It was a DQ galore in the 200 medley relay, as both Louisville’s Denis Petrashov and SMU’s Lance Feehery had their teams DQed due to early takeoffs. Petrashov’s reaction time was -0.03, whereas Butler’s was -0.02. Texas A&M ended up taking the win in this race, as Ethan Gogulski (21.71), Andres Bustamente (23.84), Connor Foote (20.23), and Kaloyan Bratanov (19.67) combined for a time of 1:25.45. Michigan’s Bence Szabados went 19.08 on anchor, the fastest freestyle split of the field, but his team was still last out of all the teams that did not get DQed. Also notable was the fact that Carson Foster was swimming backstroke for Texas, leading off in a 21.72. Caspar Corbeau, also on the Texas team, clocked the fastest breaststroke split in the field at 23.62.

Texas’s Luke Hobson then won the 500 free in a time of 4:15.88, opening in 23.69 and consistently holding 25-point splits for the rest of his race. He broke Jake Mitchell‘s pool record time of 4:17.94 from last year and Connor Jaeger’s meet record time of 4:16.54 with his race, being the only man in the field under the 4:20-point barrier. Hobson finished third at NCAAs last year in this event, clocking a 4:08.42 to break the national age group record.

In the 100 free, Texas’ Danny Krueger won with a 42.69, being the only man in the field under 43 seconds. Missouri’s Jack Dahlgren and Michigan’s 50 free champion Szabados were second and third with times of 43.39 and 43.41 respectivley, whereas Foote put up a strong 43.56 to win the ‘A’ final. Foote was less than half a second off his personal best of 43.19, which he set at Winter Juniors last year.

Hobson, Bustamente, Foster, and Krueger’s winning times are all now the fastest times in the country for their respective events.

Missouri’s Clement Secchi, yesterday’s 100 fly champion, won the 200 fly in a time of 1:43.98. He was the fastest in the field by 1.48 seconds, and took over half a second off his best time of 1:44.69 set Missouri’s dual meet against Georgia and Arizona State last week. Secchi’s teammate Noah Scheuermann took the ‘B’ final of the event, clocking a 1:46.66.

Like the men’s race, the women’s 200 medley relay also saw several DQs. Louisville’s Cecilia Viberg, Missouri’s Taylor Williams, and SMU’s Luezia Napoletano were all flagged for being early take-off swimmers, posing reaction times of -0.04, -0.05, and -0.08 respectively. The DQ for Louisville was a major points loss, as their combined time of 1:37.94 would have finished second. In addition, Gabi Albiero‘s 21.59 anchor leg would have been the fastest freestyle split in the field by over half a second.

The 1-meter diving event was won by USC’s Lina Sculti, who scored 293.95 points and beat out Mia Vallee, who is the defending NCAA champion in the event. Vallee was second with 287.45.

Albiero put up a 48.08 to win the 100 free by a significant margin, swimming a time that would have made the ‘B’ final at NCAAs last year. Her personal best time is less than second faster at 47.32. Also getting under the 49-second barrier was Michigan’s Linsday Flynn who went 48.82, and Louisville’s Christiana Regenauer who went 48.85 in the ‘B’ final.

Clearly a timer malfunction on the 200 medleys…sad because Louisville women really won fair and square!

-1/2 of the heat DQed? Insane. Dobler continues to impress.
-Foote fly split is quite impressive but not unheard of. A&M relay looks good, not gogulski and bustamante barely of NCAA splits from last year. Fast flyers across all relays, bence had a decent anchor.
-some solid 500s. Katie Crom just off her best.
-Hobson with a great early season effort. Model of consistency.
-not bad but no standouts in the 200 breast. I bet the Odgers/Dobler breast sets at practice go hard.
-bustamante could switch from b final to a final, come march. Getting the better if corbeau ought to be a confidence builder. Foster with a solid in season swim.
-solid but… Read more »