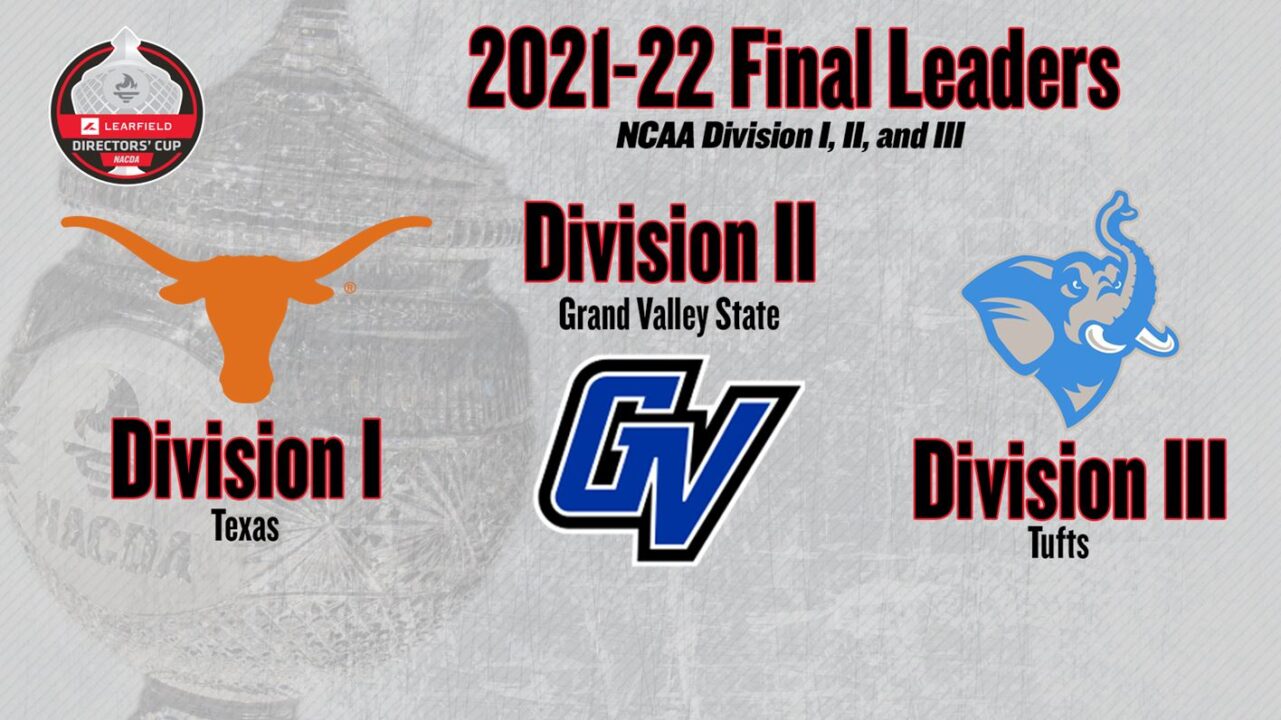 Texas came back to take its second Division I Directors' Cup, including big points from NCAA runner-up teams in men's and women's swimming & diving. Stock photo via NACDA

Texas took home its second-straight Directors’ Cup title in the final 2021-22 standings released by the National Association of Collegiate Directors of Athletics (NACDA) on June 30. This honor has been awarded annually to Division I, II, III, and National Association of Intercollegiate Athletics (NAIA) institutions based on their sports teams’ finishes in the NCAA or NAIA Championships for nearly 30 years.

Last year’s Division I final standings saw a new champion for the first time in 27 years. Due to the COVID-19 pandemic’s impact, some conferences like the Pac-12 took strict measures to ensure the athletes’ health and safety, which wound up breaking Stanford’s 25-year streak. However, the Big 12 went full throttle with its sports seasons, and Texas rose to the top after placing 4th in the 2018-19 standings.

Even with a more normal 2021-22 season, Texas continued to prove how dominant its athletics program is with a second consecutive win. The Longhorns claimed four NCAA team titles in men’s indoor track and field, men’s golf, and women’s tennis and rowing. Texas also set a single-season school record with six NCAA runner-up team finishes, two of which were claimed by the men’s and women’s swimming and diving programs.

Tufts received its first-ever Directors’ Cup for Division III colleges. The university’s victory ended Williams College’s winning streak of seven Directors’ Cup titles. Tufts had three spring-season teams finish in the top 5 at NCAAs. Women’s lacrosse took second and men’s lacrosse and tennis made the Final Four. The women’s swimming and diving team had a historic season ending with the program’s first NESCAC title and its first two NCAA individual titles. Claire Brennan won the program’s first individual title in the 200-yard free with a time of 1:48.46. Brennan then went on to earn the program’s second-ever title in the 800 free relay alongside Katelin Isakoff, Abby Claus, and Mary Hufziger. As a result of the team’s efforts, the Tufts women finished 7th at the Division III NCAA Swimming and Diving Championships.

Junior/community colleges follow separate criteria to be declared the winner of the Directors’ Cup in their own category. The National Alliance of Two Year College Athletic Administrators (NATYCAA) annually awards the NATYCAA Cup, which also crowns the institution with the most success in its athletics. NACDA deems this honor to be the junior colleges’ equivalent to the Directors’ Cup.

Top 10 Schools from Each Division

You can access all the final standings here and see a breakdown of all the institutions’ scores.

Originating in 1993, the Directors’ Cup has been awarded to colleges and universities for nearly 30 years.

I’ll take it, football is next