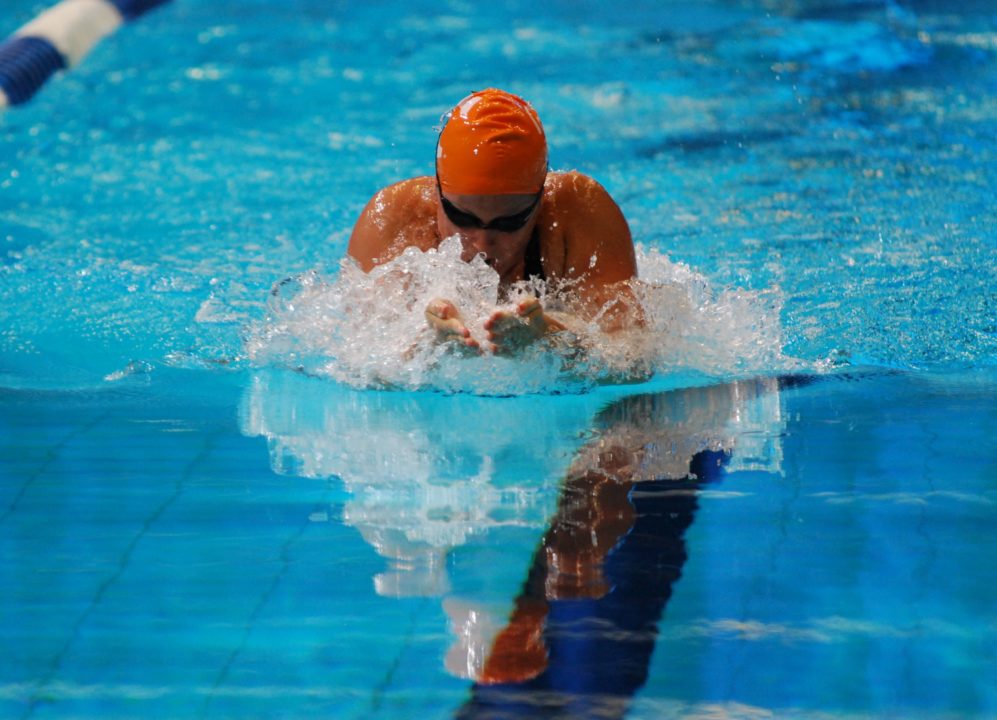 With just one session to go in the 2014 Nike Cup Invite, the Tennessee women are once again in great shape for the team title, while NC State looks to make a run at the men's leader UNC. Archive photo via Tim Binning/TheSwimPictures.com

With just one session to go in the 2014 Nike Cup Invite, the Tennessee women are once again in great shape for the team title, while NC State looks to make a run at the men’s leader UNC.

The Volunteer women hold top seeds in three of the four individual events coming out of prelims. That includes a runaway top seed from breaststroker Molly Hannis (2:09.23), who leads by over four seconds.

One of the better races set up for tonight is the women’s 100 free, where Faith Johnson sits just a tenth up on NC State’s Riki Bonnema. Johnson still has to be the odds-on favorite, though, considering she didn’t even crack her season-best in prelims and should have a shot to challenge the 49-second barrier tonight. Johnson was 49.70 in prelims and Bonnema 49.86.

Tennessee also has the top 200 backstroker with Amanda Carner coming out of prelims at 1:56.59.

UNC leads the men’s points by 61.5 over NC State, but things could get interesting with the 400 free relay being added at tonight’s final – NC State has been cranking out some gigantic relays lately and is loaded with great sprinters.

The key individual race will be the 200 fly, where UNC’s Dominick Glavich holds a narrow top seed over NC State’s Christian McCurdy, 1:46.23 to 1:46.50. Glavich is the top seed, but McCurdy’s season best is already well into the 1:44s this season, so he’s likely got enough saved up to make a run in the final. Also in the hunt in that race will be Tennessee freshman Sam McHugh, who was 1:47.37 in the morning but has been 1:45 already this year.

McHugh is also the second seed in the 200 back behind teammate Sean Lehane (1:42.59, which should be one of the top times in the nation even after this weekend’s slate of big meets). That’ll key a Tennessee team hoping to overcome a 70-point deficit on NC State and a 131.5-point margin on UNC.

NC State’s Simonas Bilis leads the 100 free at 43.69, just barely a season-best for him. Bilis has already been flying very high this season, so it’ll be interesting to see if he’s got any more speed in the final.

One more great race should be the 200 breast – East Carolina’s Rokas Cepulis leads the way in 1:56.62, but he’s followed very closely by Duke sophomore Peter Kropp (1:56.73) as two of the lower-ranked teams at the meet each have a shot at an event win.

The day continues with heats of the 1650 free, and finals resume at 5:30pm ET with finals of each event, plus the 400 free relays.

You can find full results on Meet Mobile under “2014 Nike Cup Invitational.”