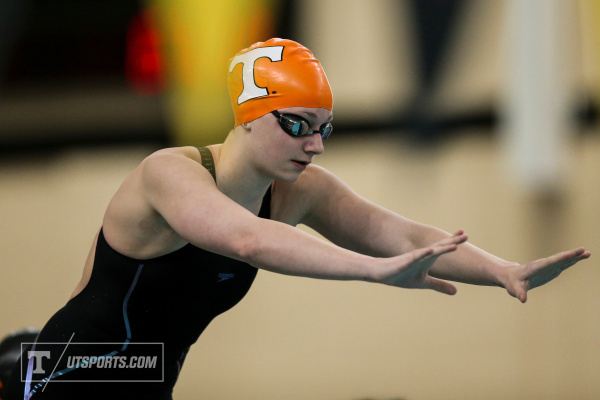 Madeline Banic was one of four seniors named captain for the Tennessee Volunteers for the 2018-19 season. Archive photo via Craig Bisacre/Tennessee Athletics

The Tennessee swimming & diving program has named their four captains for the upcoming 2018-19 season, all of them being seniors. Madeline Banic and Rachel Rubadue will serve as the women’s team captains, and Matthew Dunphy and Joey Reilman will represent the men’s team. The news was announced via press release last week.

“When an athlete is named captain of any team at Tennessee, it is a tremendous honor and responsibility,” Tennessee head coach Matt Kredich said. “On the swimming and diving team, the position is held by someone who has developed a number of qualities to a very high level. We modeled our definition of captain after Sam Walker’s ‘The Captain’s Class’ book about the most effective captains in history. These qualities heavily influence the competitive personality of the team, and include humility, powerful communication abilities, a servant’s mindset, and relentlessness competitiveness.

“The captains that we’ve chosen each has a unique blend of qualities that inspire the team and make everyone around them better.”

Banic, a sprint freestyle and butterfly specialist, comes into her senior year as an eight-time All-American and six-time SEC champion. Last season she was apart of the 3rd place finishing 200 free relay at NCAAs, and also finished 13th individually in the 100 fly.

Rubadue, who will represent the diving team, is a two-time All-American including a 7th place finish last season in the 1-meter, and was also the 2016 SEC champion on platform.

Dunphy has steadily seen improvements throughout his time at Tennessee, qualifying for the NCAA Championships for the first time last season in the 100 and 200 breaststroke and posting impressive 28th and 22nd place finishes respectively. Kredich adds “Matthew is already one of the great stories in the history of Tennessee Swimming. He has an unrelenting desire to improve, and the standards he’s set for himself are exemplary.”

Reilman comes in as a four-time All-American and also a three-time CSCAA Scholar All-American. Last season he qualified individually for NCAAs for the first time, placing 25th in the 200 back and also contributing on the scoring 400 free and medley relays.