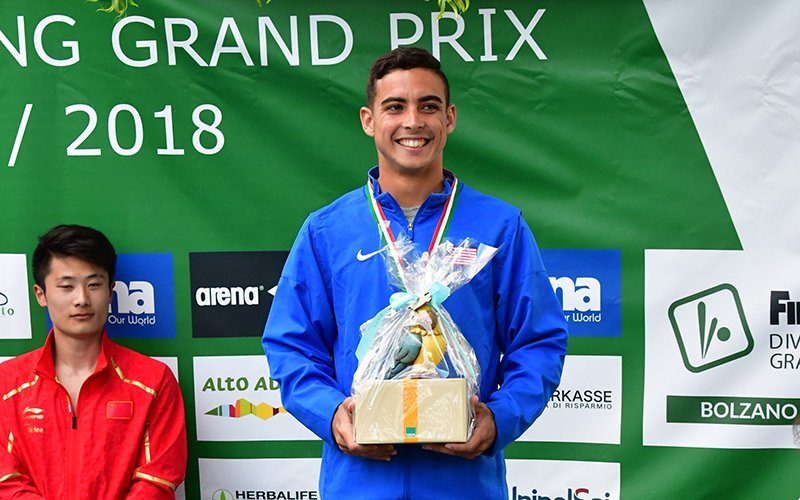 In all, the U.S. won 11 medals – three gold, three silver and five bronze – throughout the week.

“It felt really good. We haven’t competed together in awhile and we haven’t trained much together. The goal was to trust each other, and that’s what we did. We came out doing really well, and we did what we knew how to do. It turned out really well for us,” Gibson said.

“We had a great day. It was great to take it dive by dive, and I think going into it, that was our motivation. Do one dive and move on to the next. I think we did very well at that,” Palmer said.

Herrera secured the 3-meter victory with 438.10 points, with Windle close behind in second at 425.45. Great Britain’s James Heatly was third with 416.65 points.

In third place after four rounds, Herrera took the lead with 79.80 points on his front 4 ½ tuck in round five. He then finished with 82.25 points on his reverse 1 ½ with 3 ½ twists to maintain the top spot in the standings.

“It means a lot. It’s very nice to win a Grand Prix here in the USA, and for me and Jordan to get first and second is awesome. My last dive, my gainer twister, is usually a pretty good dive, and I knew I had to hit it to come away with the gold. I just tried to stay focused and do what I could,” Herrera said.

Windle also paired with Loschiavo for 416.04 points and second in men’s 10-meter synchro, with Mexico’s Randall Willars and Diego Balleza winning at 431.67. Egypt’s Mohamed Noaman and Youssef Selim took third with 312.24 points. USA’s Tyler Downs (Ballwin, Mo./Indianapolis, Ind.) and Jordan Rzepka (Solon, Ohio) scored 318.66 but could not medal due to FINA rules. Loschiavo and Windle scored more than 80 points on three of their four optionals, including an inward 3 ½ tuck that earned 85.44 points.

Like Herrera, Magaña came from behind to earn a spot on the podium. She scored 316.80 points on 10-meter to finish second to Australia’s Melissa Wu, who won with 355.80 points. Italy’s Noemi Batki was third at 301.40. Magaña missed her second dive, a back 3 ½ tuck, to sit in fifth place with three rounds to go. She responded with 66 points on a front 3 ½ pike to jump to fourth after three rounds and moved into second with 68.80 points on her fourth-round armstand double back with 1 ½ twists. She then finished with 76.80 points on a back 2 ½ with 1 ½ twists.

Herrera and Reedy scored 272.76 to finish third in mixed synchronized 3-meter. Italy’s Maicol Verzotto and Elena Bertocchi won with 280.86 points, and Mexico’s Arantxa Chavez and Adan Zuniga were second at 277.32. The U.S. team of Jacob Cornish (Honolulu, Hawaii/Austin, Texas) and Meghan O’Brien (Concord, Mass./Austin, Texas) were a close fourth at 271.20.

Several members of the U.S. team will head to Montreal for a FINA World Series meet April 26-28. After that, the focus shifts to the USA Diving National Championships, which will be held May 19-26 in Indianapolis and will serve as the trials for this summer’s FINA World Championships.