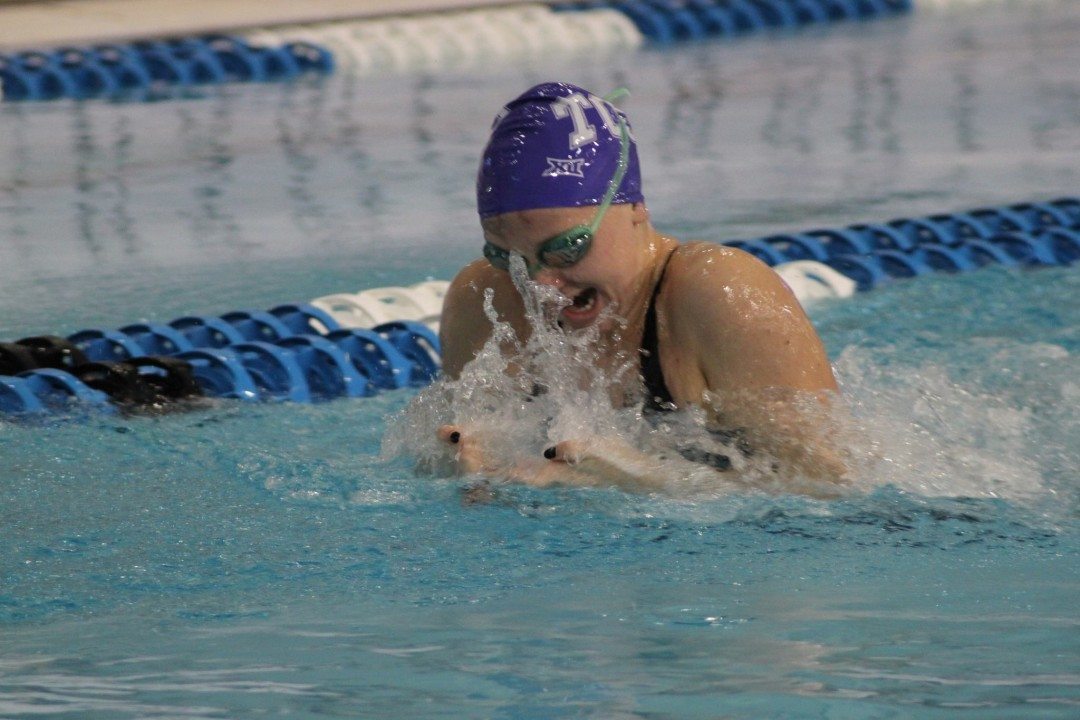 The ladies from TCU claimed victory on their Senior Day with assistance from sophomore Devin Newton featured above. Current photo via Andy Ringgold/Aringo Photography

After last week’s victory in the Backyard Brawl against Pitt, West Virginia University hopped over to Fort Worth, TX this weekend to square off against Big 12 adversary Texas Christian Univeristy in their Senior Day dual meet. While the TCU Horned Frogs seemed to have control in the midst of their senior day, the Mountaineers rallied for several victories towards the middle of the meet and the men defeated their foe on the road, 154-144. Texas Christian’s women emerged on top for their Senior Day, 157-143.

The women from TCU got off to a strong start in the 200 medley relay with Madison Ibrahim, Devin Newton, Micaela Roemer, and Bryn Lohrberg piecing together a 1:44.95, easily putting down the Mountaineers’ finish of 1:46.42.

WVU’s Emma Skelley blasted a 10:08.16 in the 1000 free to finish just three seconds off her seed. She closed up the day’s distance events with her 500 free winning time of 5:00.60, and finishing just second to Skelley was TCU swimmer Mikayla Winkler, who touched in at 5:06.81. Winkler also collected the 200 free in 1:52.14 for the Horned Frogs’ first individual title of the day.

Facing a deficit from TCU’s initial lead, Jaimee Gillmore’s marks of 23.59 in the 50 free and 52.49 in the 100 free gave renewed energy to the Mountaineers’ cause. Teammate diver, Julia Calcutta, owned the 1 meter board competition with a score of 274.19, but dropped to third on the 3 meter when Maddie Woods’ score of 276.82 hit the 3 meter.

With the last event on the line for TCU’s Senior Day, the foursome of Winkler, Lohrberg, Roemer, and Alexandra Robertson threw down a 3:31.92 in the 400 free relay to validate their victory against the WVU Mountaineers.

Senior Day for the men’s side started out smoothly enough for the Horned Frogs as Christopher Hearl, John Story, John Smith, and Garrett Hills coasted a 1:31.07 in the 200 medley relay for the first of three straight event wins.

Diving entering into the mix only complicated matters for TCU as they only entered one diver into a Mountaineer field of four deep. Alex Obendorf captured both the 1 meter (330.97) and 3 meter (364.88) titles with fellow diver Mike Proietto sliding into second at 321.74 and 338.18.

The 400 free relay between the two Big 12 opponents was decided by just two hundredths of a second. Marsh and Ross Glegg led off for WVU with a pair of monster 44’s for an initial advantage while TCU’s anchor Hills tried to chase down Merwane El Merini for the last grab at points. The Mountaineers bested the Horned Frogs 3:02.45 to 3:02.47.