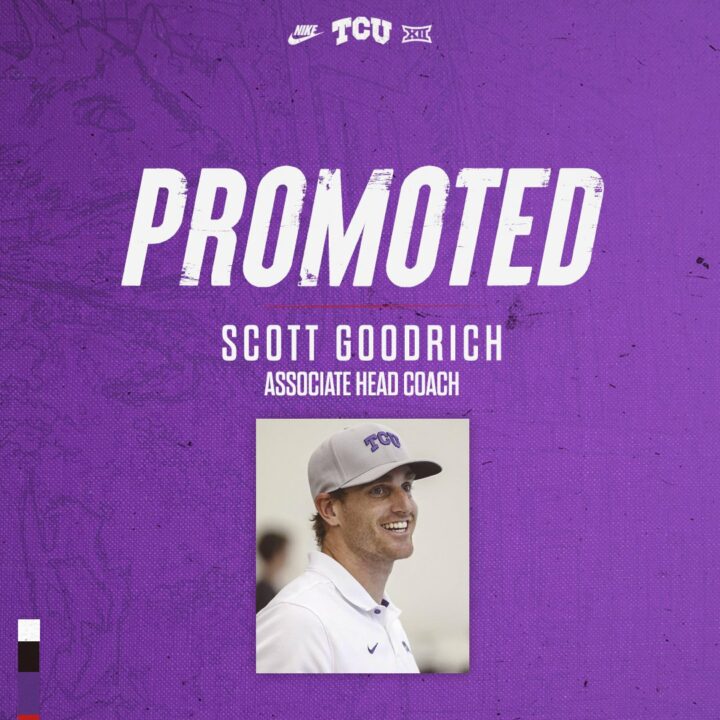 Goodrich is entering his 3rd season with the Horned Frogs, and he has primarily worked with the sprint group. Current photo via TCU Athletics

Goodrich is entering his 3rd season with the Horned Frogs, and he has primarily worked with the sprint group. Before his tenure at TCU, Goodrich coached at Scottsdale Aquatic Club, in the greater Phoenix area. Goodrich also previously coached Cesar Cielo, the World Record-holder in the men’s LCM 50 and 100 freestyles. Goodrich coached Cielo from 2013-2016, and during that time, Cielo won World Championships Gold in the 50 free and 50 fly.

Speaking on the promotion, Winchester said in part “He (Goodrich) is a fantastic technician with a deep knowledge base for our sport, who has had such a positive impact on the development of our student athletes.” Winchester also went on to add that Goodrich has “made an immediate impact” with the TCU sprinters, and in their recruiting.

Goodrich said of the promotion, “I’m excited to continue to work with our team and continue the process that we’ve started, especially since I came on two years ago.”

A huge congratulations to @TCUswimScott on his promotion to Associate Head Coach! 👏🐸

Before Goodrich was at Scottsdale Aquatic Club, he served as an assistant coach at Arizona State University. Goodrich competed collegiately at Auburn, where he was a 4-time NCAA champion.

TCU is beaming with potential. Got some solid recruits, great group of returning swimmers and a strong staff. Just need a better pool.

Great call and great coach! I just wish TCU would commit to the program and give them the facility they deserve. And yes TCU was third at Bog 12s last year, out of three teams. Come on Frogs, look and see what SMU has done and commit to this. It’s unreal that a school with this much money and alumni support still trains in a 5 for deep, 6 lane, 25 yard pool. With a diving well that only has a 5 meter platform. How can they even think, they’ll ever recruit the kind of talent possible with that as a training facility?

Sorry for the typos, I just got riled up and forgot to proofread.

+ swim camps. UT and A&M kill it with their camps.

6
-1
Reply
Coach A
Reply to  Swimminsammy

Be careful – administration loves to use that “facility costs $20M and we can’t afford that, so we’re going to discontinue the sport” – see University of Washington, Clemson. – with Big 12 down to two men’s teams and 4 women’s teams in a few years, it will be interesting to see what happens

More money without setting a salary precedent for assistant coaches.

I get that but are they really fooling the ADs? Just bring in everyone as an associate and quit trying to fool people! Does it make the rich richer? Do all sports give the Associate card so easily? To me it seems weird to have 5 Associate Head coaches?!?!

It’s not about ‘fooling the ADs’. It’s about paying your more experienced assistants so they stay without having to pay your next green assistant on the same payscale.

I mean SEC schools can afford to pay more associate head coaches then a pac 12 school! Or some other conference!

as commenters have said, schools require it to pay somebody more than somebody else on same job, as is my understanding, like there is long list and there should be reason why the pay is different

Congrats Scott! Well deserved!
With your international experience Im sure lots of foreign swimmers will be excited to take a look at TCU!

Congratulations to coach Goodrich.
No disrespect meant, but how can recruits look at TCU and think it’s a serious destination? Terrible pool, no conference to speak of (in a year), and really the program doesn’t seem to have any forward momentum. Best of luck to the horned frogs but hard to see them ever catching up to the rest of Texas in swimming and diving.

That is one perspective. No forward momentum? Three years ago Sammy “8 beers deep for breakfast” Busch had the team on the verge of being cut. Existing and stability is a start for Goodrich and the staff.

VegasFrogFan is exactly right. Can’t really rip on the current staff when they’re having to dig themselves out of another Busch disaster. Give em some time. But a better facility would make recruiting a lot easier…

Congratulations Scott! Well deserved- amazing coach! TCU is lucky to have him!