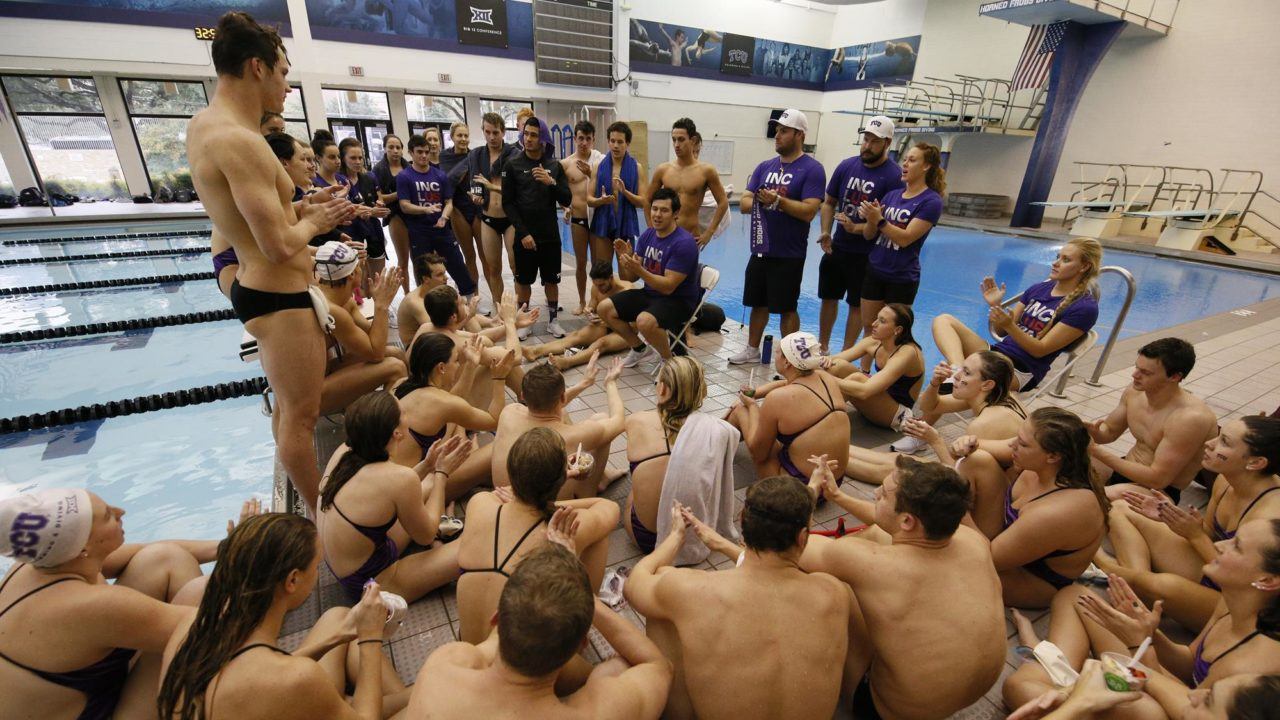 The Horned Frogs open their season against the University of Missouri on Friday and then the women will have head to Kansas to face the Jayhawks on Saturday. Stock photo via TCU Athletics

FORT WORTH — TCU’s swimming and diving teams begins its 2020-21 campaign with a pair of dual meets this weekend.

The Horned Frogs open their season at 10 a.m. on Oct. 16 in Columbia, Mo., against the University of Missouri on SEC Network+ on Watch ESPN. TCU’s women will have a quick turn around after the season opener, heading to Kansas to face the Jayhawks the next day at 10 a.m..

The Tiger men finished last season ranked No. 7 in the country, with their women at No. 20. Missouri’s men went undefeated in dual meets during their 2019-20 campaign, with wins over SEC foes Florida, Kentucky and LSU. Missouri defeated four nationally-ranked opponents at a two-day quad dual against No. 3/7 North Carolina State, No. 17/14 Kentucky and Arkansas.

Kansas’ women went 7-1 in dual meets last season, with their lone loss at No. 21 Arizona State. The Horned Frog women’s last encounter with the Jayhawks came in 2018, falling 206.5-92.5. Despite the loss, TCU had a strong performance on the diving boards with a pair of wins and three NCAA Zone cuts. Izzy Ashdown swept both 1- and 3-meter boards with Connie Deighton finishing second in both events. Kiki Rice also earned a second-place finish in the 200 IM, finishing in 2:09.33.

The 2019-20 season saw TCU’s women’s swimming and diving team post its highest conference finish since 2012-13. This year, the men will look to do the same, setting their sights on second place in the Big 12 Conference for the first time since 2015.

Kiki Rice led the lady Frogs with 38 points at this past season’s conference meet. The team captain qualified for the A final in the 200 IM, 400 IM and 200 back. Fellow rising senior Sally Clough contributed 36 points as well.

On the boards, TCU had three international Frogs qualify for NCAA Zones.

Ashdown registered six NCAA zone cuts on 3-meter and four zone cuts on 1-meter during the 2019-20 season. She nearly punched her ticket to the national championship meet, falling three spots off from the cut.

Another NCAA Diving Zone qualifier Frog returns from across the pond in Connie Deighton. Two seasons ago, Deighton became the first Horned Frog to reach the final round at the NCAA Zone meet since 2009. She made her second consecutive finals appearance on platform last season.

Faith Harms-Zacharias completes the diving trio after amassing three zone cuts on 1-meter and one on 3-meter as a freshman.

All three are expected to have an impact at the conference meet in their pursuit of NCAA qualification through NCAA Zone D. The last Horned Frog to compete at the NCAA Diving Championships came in 2007 with R.J. Hesselberg. The last female diver to participate was Sarah Crawford back in 1996.

Last season, the Horned Frogs set 18 new school records, half of which were relay records. All four individual short course records were broken by freshmen.