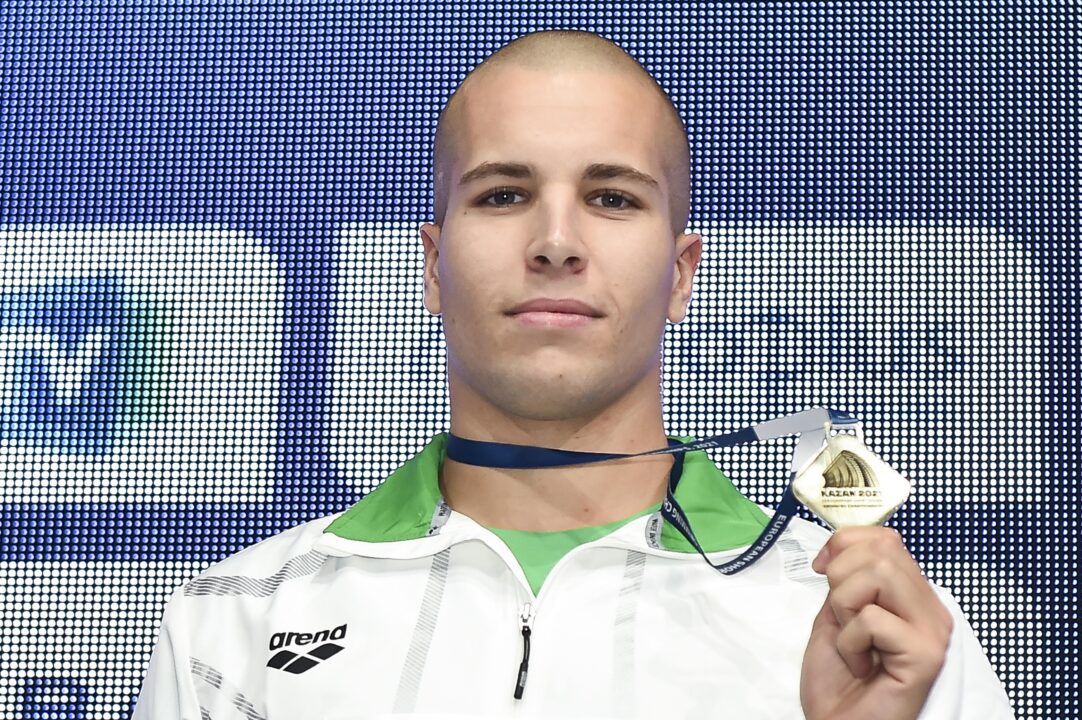 Christou’s winning effort of 24.97 in the 50m back scored the Greek a new meet record, tying the 8th fastest time of his career. He’s been as fast as 24.49 in his career, a time he clocked in the semi-finals en route to becoming the 4th place finisher at the 2021 European Championships.

The Olympian rounded out his treble of wins with a podium-topping performance of 53.64 in the 100m back. Christou’s time put him just outside the top 15 performers in the world this season and sits within a second of his personal best of 52.77 from 2021.

In the former, the 26-year-old logged an effort of 23.43 to edge out a pair of Greek swimmers in Stergios-Marios Mpilas and Kristian Gkolomeev. Mpilas touched in 23.89 as runner-up while Gkolomeev rounded out the top 3 in 24.08.

The 100m fly event saw Szabo hit a mark of 52.39 to seal the deal as the only swimmer to dip under the 53-second threshold. His result checked in as a new meet record, although it was well off his lifetime best of 51.28.

For Gkolomeev’s part, the 28-year-old World Championships silver medalist posted a mark of 22.22 to take the men’s 50m free. Szabo was next in 22.37 to set the pair up once again next to each other on the podium.

On the women’s side, Slovenia’s Katja Fain produced swims quick enough for gold in a trio of freestyle events including the 100m, 200m and 400m distances.

Her 200m free here represents a new career-quickest standard, outperforming her previous PB of 1:58.00 from just this past March. Fain’s 400m free also hacked off some time from the fastest the Slovenian has ever been, easily surpassing her 4:11.01 also from March.

Greece’s Anna Ntountounaki was successful in her butterfly specialty, reaping gold in the 50m in a new meet record of 25.89 while she notched 57.93 in the 100m distance.

Ntountounaki is her nation’s record holder in the 50m fly with the 25.65 she secured at last year’s European Championships. She also is Greece’s fastest woman ever in the 100m fly with her mark of 57.25 from the Tokyo Olympic Games.

While I checked only the swimming results and the most interesting are Jefimova’s 100 br. and Fain’s 200 free. More improvements to come.