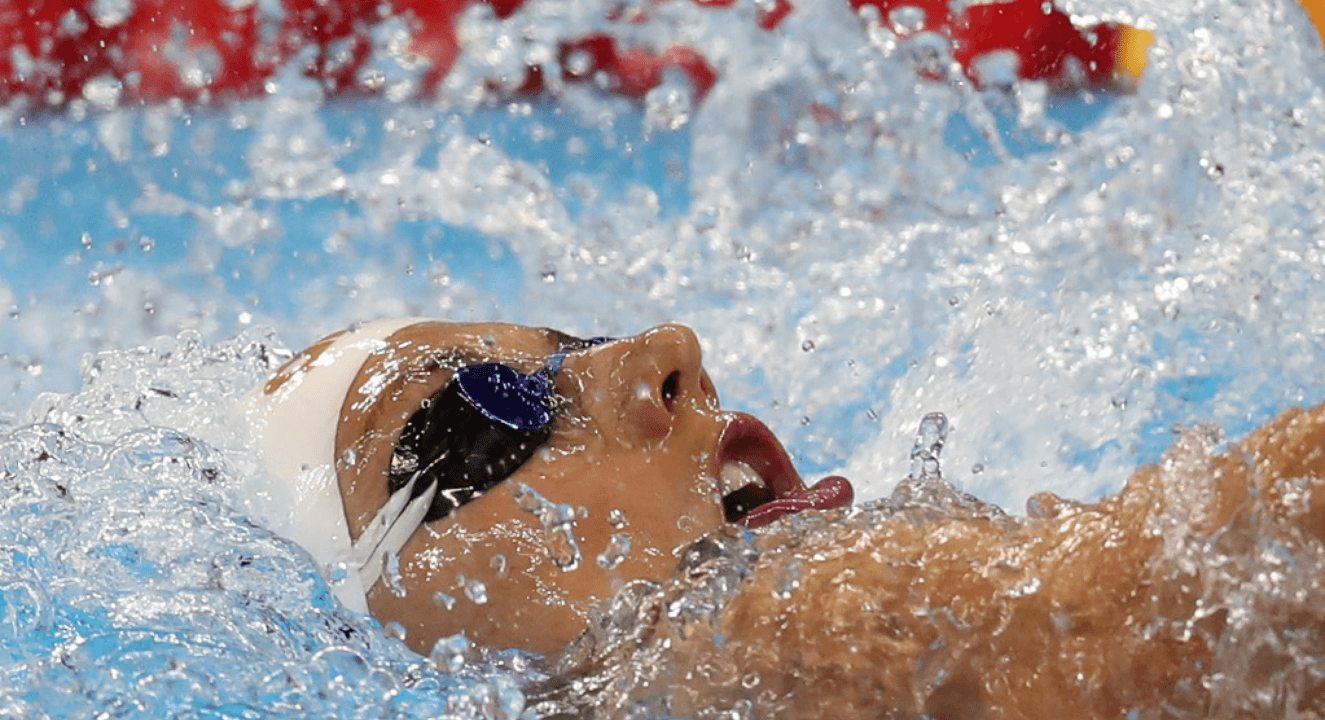 Counting finals swims only, Katinka Hosszu’s world-record-smashing 400 IM was by far the most dominant swim of night one. Current photo via Mike Lewis/Ola Vista Photography

Counting finals swims only, Katinka Hosszu’s world-record-smashing 400 IM was by far the most dominant swim of night one. Her 4:26.36 time, almost 5 seconds faster than USA silver medalist Maya DiRado, won by 1.80%.
Hosszu’s 400 IM was also the most dominant of three World Record swims on day one. She chopped 0.78% off Ye Shiwen’s 2012 World and Olympic record. (The Australian women’s 4×100 FR cut 0.16% from their own 2014 World Record, and Adam Peaty’s 100 Breaststroke preliminary cut 0.64% from his own WR).

In terms of personal dominance, Hosszu reduced her personal best time (and National Record) by 1.33%. Only one podium finisher could claim a higher level of personal (or National) dominance: the women’s Canadian team’s 4×100 FR featuring Sandrine Mainville, Chantal vanLandeghem, Taylor Ruck, and Michelle Williams dominating the Canadian Record by 1.22% in the prelims, PLUS another 0.45% with Penny Oleksiak swapped for Williams in the final.

Day Two featured what may be two of the most dominant swims in recent Olympic history. Adam Peaty and Katie Ledecky joined an elite squad of Olympic dominators: swimmers who have won an Olympic gold medal by over 2%.

In the last 30 years, an Olympic swimmer has only won by more than a 2% margin of victory 5 times:

The most dominant swim of the second night of finals (and possibly the Olympics) belonged to Adam Peaty.
He dominated the men’s 100 breast final by 2.73%. He dominated his own WR by 0.74% in the prelims, and dropped the WR 1.38% by the final. In an age when the fastest breaststrokers on the planet are over the moon to swim a 58-point (see: bronze medalist Cody Miller’s post-race reaction), Adam Peaty knocked on the door of a 56. The second fastest swimmer in history, former Olympic and World Record holder Cameron vanderBurgh, has a best time of 58.46, or an astonishing 2.33% slower than Peaty’s new WR.

Katie Ledecky knows a thing or two about dominating her competition. After her mind-blowing 400 free, she holds the fastest time in history by “only” 1.14% (Federica Pellegrini). She joined an elite club besting Jazz Carlin by 2.02% – even as Carlin swam under the previous Olympic Record of 4:01.45 from the late great Camille Muffat.
In a session with those two incredibly dominant swims, Sarah Sjostrom’s 100 fly World Record could be easily overlooked. Her margin of victory was a dominant 1.77%, and her winning time of 55.48 is 0.90% faster than the world’s second greatest of all-time, former World and Olympic Record holder (and new bronze medalist) Dana Vollmer.

Also of note: Canada’s Penny Oleksiak dominated her own personal best, World Junior Record, and Canadian Record by 0.94% to win silver in the 100 fly.

“The Dominance Series” is sponsored by SwimSpray-dominating the competition when it comes to chlorine removal; and compiled by Travis Knop, Aimee Schmitt and Andrew Chadeayne.

Katina is super cute…she should dump her hubby and marry Rowdy Gaines.

Katina is super cute, she should dump her hubby, marry Rowdy Gaines and move to Hawaii.