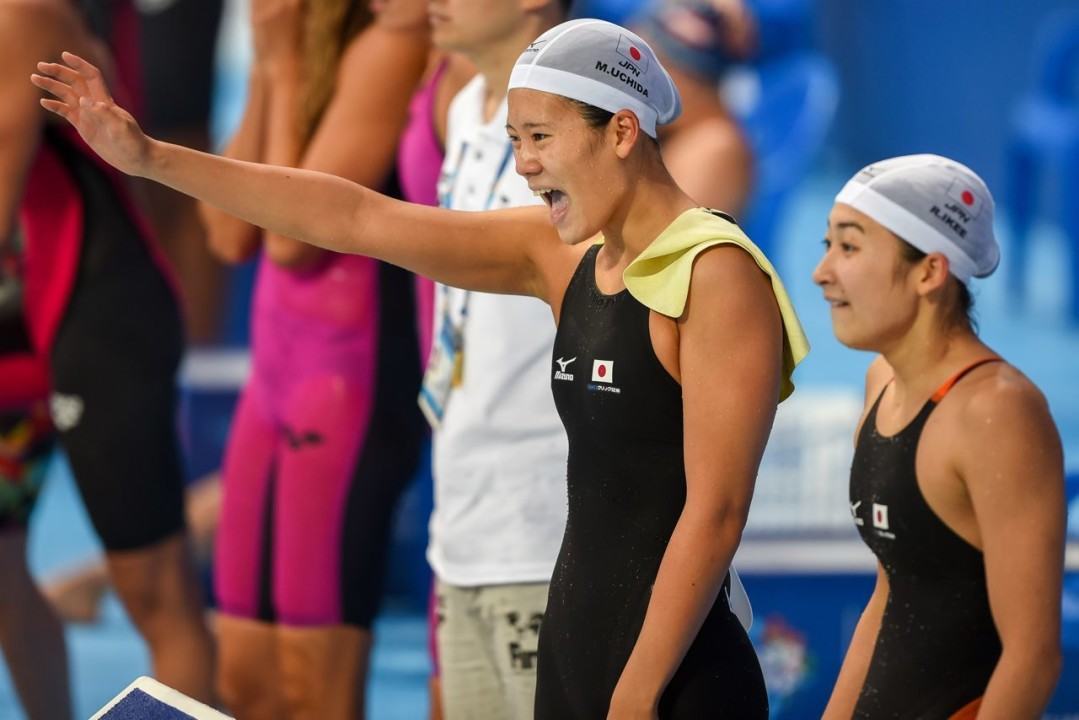 Japanese teammates Rikako Ikee and Miki Uchida tied for 16th place in the prelims of the women's 100 freestyle this morning, and now must compete in a swim-off to determine who will advance to the semifinals tonight. Current photo via Peter Sukenik/www.petersukenik.com

Japanese teammates Rikako Ikee and Miki Uchida tied for 16th place in the prelims of the women’s 100 freestyle this morning where both swimmers clocked a 54.50, and now must compete in a swim-off to determine who will advance to the semifinals tonight.  Ikee and Uchida both swam in Japan’s 8th-place 4 x 100 freestyle relay on Saturday in the first day of competition, and now they must compete against one another in order to get Japan a lane in the semifinals of the 100 free.

Earlier this summer at the Japanese Championships in Tokyo Ikee set the national record in the 100 free at a 53.69, which would have been good for 8th in the heats this morning had she been able to replicate that swim in Rio.  However, when Ikee broke the Japanese record it was Uchida’s record she took down, which stood at a 53.88 from April of 2016.  Ikee’s international record and particularly her performance in these Olympics has been very impressive, especially considering that she is only 16-years-old (teammate Uchida is 21-years-old).

In the 100 butterfly, Ikee improved the Japanese record in three consecutive swims, going a 57.27 in prelims, a 57.05 in finals, and a 56.86 in finals.  Ikee is also the World Junior Record holder in the 50 free and 50 fly, so she will have the speed to take it out.  Ikee also holds the Japanese record in the 50 freesyle.  While this is the only tie in this event that will determine whether or not swimmers advance to the semis tonight, Penny Oleksiak (Canada) and Jeanette Ottesen (Denmark) also tied for 5th, and Pernille Blume (Denmark) and Menghui Zhu (China) tied for 11th.

The swim-off will take place at the conclusion of the other prelims this morning, unless someone scratches.

What happened in the swim off?

No swim off, Shen Duo of China scratched the semis so both the Japanese swimmers advance.