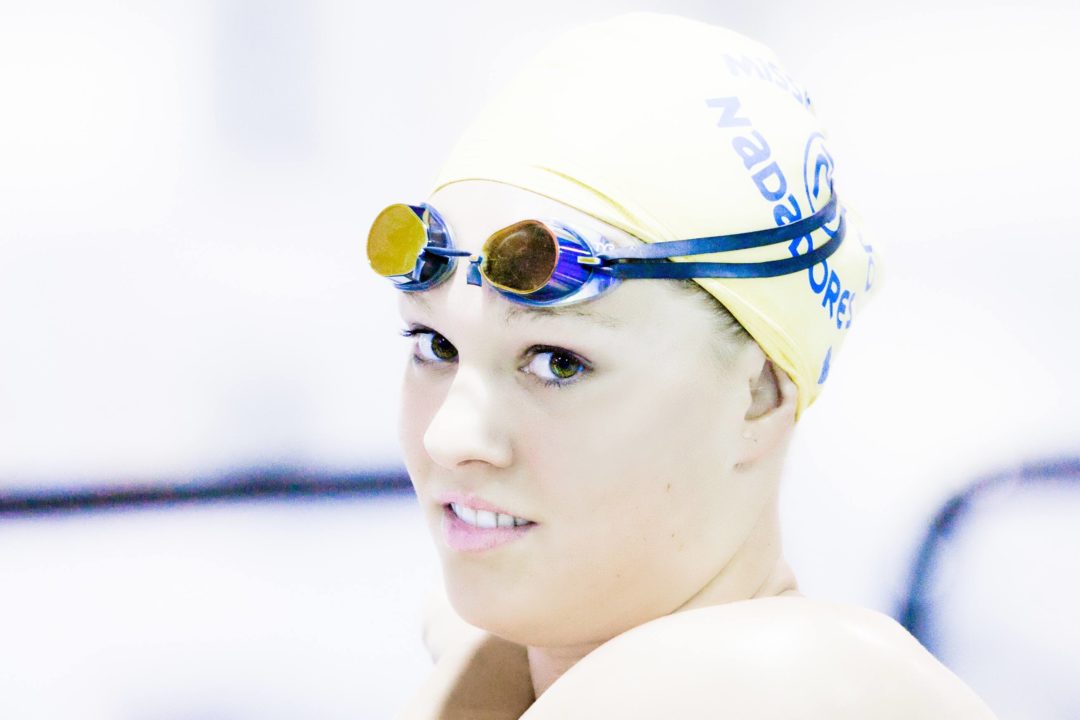 Chloe Sutton's 400 free is looking as strong as ever just three weeks out from the World Championship Trials. (Photo: Tim Binning/TheSwimPictures.com)

Novelline Smashes 53.0 in 100-Yard Back To Highlight IL Club Meets

16-year-old Carly Novelline hit lifetime-bests in both the 100-yard back and 100-yard fly for Wildcat Aquatic in a dual meet with Glenbrook Swim Club.

At last year’s  Fran Crippen Memorial Swim Meet of Champions, Chloe Sutton had a really good 800, but was not-so-hot on her 400.

It will be interesting to see what Sutton puts up in the 200 free on Sautrday, as she could be making a serious run at the American 800 free relay for the World Championships.

Ashley Steenvoorden from Minnesota took 2nd in 4:10.05, which is faster than she was in all of 2012. Last year, she had hardly any racing leading into the Olympic Trials in this event, but  headed into this year’s trials, she’ll have almost three times as many 400 freestyles under her belt in the 6 months leading up to Trials.

Sutton’s was the only victory for the American women on the second day of this meet, as Australia and Canada largely dominated the ladies’ events.

In other races, Australian 18-year old Brittany Elmslie won the women’s 100 free in 54.71, which is a little better than she was last weekend at the Santa Clara Grand Prix, and her countrymate Emily Seebohm took 2nd in 55.57. Liz Pelton was 3rd in 55.79.

Cal junior-to-be Seth Stubblefield won the men’s race in 50.90. After a second-straight successful college season, this result looks like Stubblefield could really be turning a corner in long course and dip under 50 seconds for the first time in his career. Albanian Sidni Hoxha, who trains in the U.S. at Old Dominion, took 2nd in 51.02. Australia’s second-best miler, 17-year old Mack Horton, was pretty impressive with a 51.04 sprint for 3rd place.

In the men’s version of that race, Tom Shields, who scratched the event in Santa Clara, was 2:00.26 to tie for the victory with Minnesota’s World University Games team member Kyler van Swol. That’s the best time of Shields’ career outside of last year’s Olympic Trials, and for van Swol it’s his best time, period.

Canada grabbed a second-straight victory when Hilary Caldwell won the women’s 200 backstroke in 2:11.24, a significant seven-tenths of a second drop from Santa Clara. The entire A-final of that race was made up of Canadians and Australians, aside from runner-up and 15-year old Courtney Mykkanen, who was a 2:13.01. She was followed by Brooklyn Snodgrass (2:13.86) and Emily Seebohm (2:14.24).

There was no Liz Pelton in this race, after she was DQ’ed in prelims of the event in Santa Clara.

The individual swimming was finished by Canadian Ryan Cochrane picking up his second win of the meet with a 3:51.15, though this time he’d miss the Meet Record. His fellow Canadian Jeremy Bagshaw took 2nd in 3:51.67, and Keegan Zanatta made the race a sweep for Island Swimming with a 3:53.93 for 3rd.

Neither winning relay was all that fast, but the Canadian women won in 3:47.62, a new Meet Record, and the UBC Dolphins took the men’s victory. For international teams, especially in Australia, that don’t have the same collegiate system as the Americans to develop relay skills, relays these sort of meets are more important than they are for the Americans.

Joel Greenshields from Cascade with a quick 50.26 relay split. He should have contended better in the individual 100.