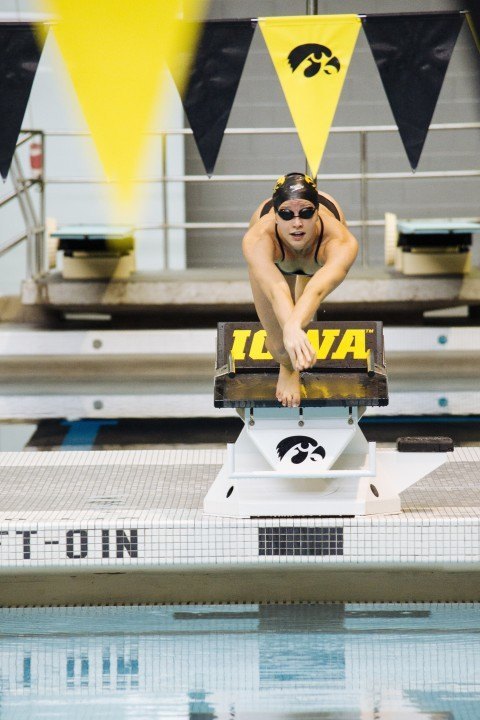 The University of Iowa swimming and diving team handed out its annual team awards on April 26, inside the Feller Club Room in Carver Hawkeye Arena. Archive photo via Iowa University Swimming & Diving

The following is a press release courtesy of the University of Iowa:

IOWA CITY, Iowa — The University of Iowa swimming and diving team handed out its annual team awards on April 26, inside the Feller Club Room in Carver Hawkeye Arena.

Senior Grant Betulius and junior Roman Trussov shared the men’s Armbruster/Patton Most Valuable Player Award, while junior Addison Boschult took home the “Lobby” Lobdell Diving Award, given to the top male diver, for the third year in a row.

On the women’s side, senior Becky Stoughton was the recipient of the Most Valuable Player Award, while Joelle Christy garnered the team’s Nancilea Underwood Diving MVP Award.

Betulius and Trussov garner a split of the men’s MVP award after qualifying for the NCAA Championships both as individuals and as relay members. The duo swam on the men’s 2015 NCAA-qualifying 200 medley (18th-place) and 400 medley relays (19th-place).

Boschult was awarded the MVP after earning honorable mention All-American honors on the platform following a top-10 finish at the 2015 NCAA Championships. The Omaha, Nebraska, native finished ninth overall, diving to a score of 386.50.

Stoughton received the top recognition for the women after swimming to a title in the 1,650 free at the Big Ten Championships and earning honorable mention All-America honors in two events.

Jackson Halsmer garnered the Wally Ris Memorial Award for swimming the fastest 100-freestyle time throughout the course of the season. The Byron, Illinois, native led the team with a top time of 44.58.