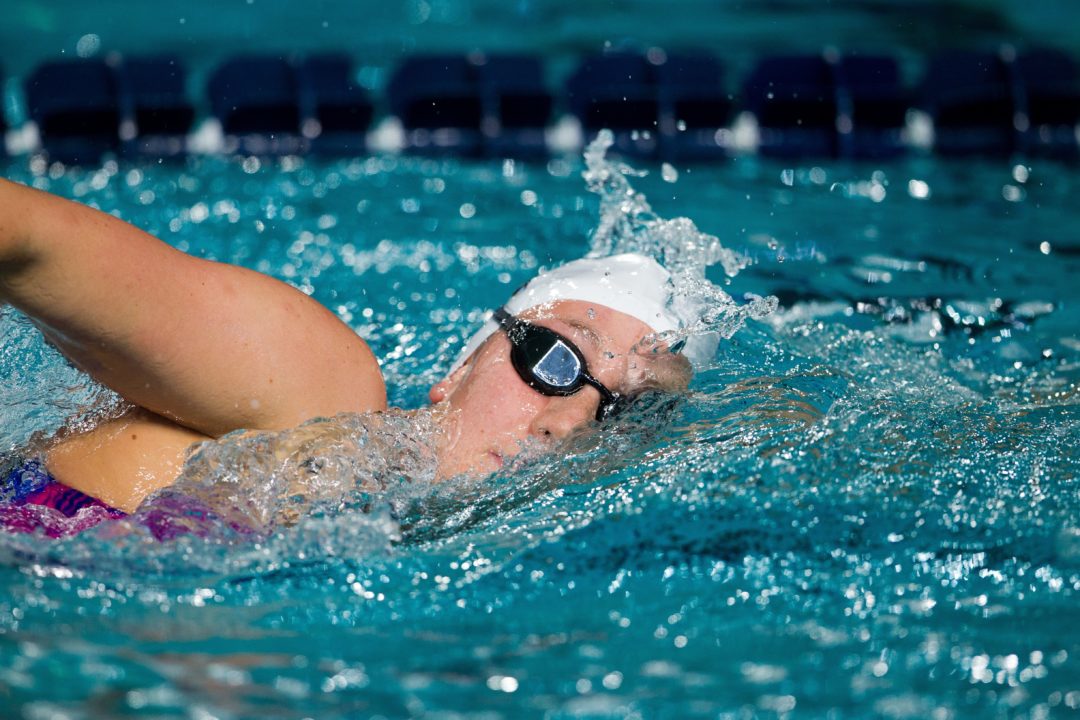 The Stevens Institute of Technology women's swimming team took a second-place finish at the 2013 Eastern Collegiate Athletic Conference Championships at Lehman College in the Bronx with 1,297.50 points. NYU won the event with 1,650.5 points. Current photo via Tim Binning/TheSwimPictures.com

The Ducks are currently in third place with 122 points. NYU is in second at 171 and DI Fairfield University is in first with 180.

Only two events were competed in Friday night with the rest taking place Saturday and Sunday in the first championship-style meet of the season for the Ducks.

Freshman Danielle Caruso was Stevens’ top finisher in the 1,650-yard freestyle. The rookie recorded an NCAA B-cut time of 17:35.50 and placed fourth overall which was good for 26 points. Sophomore Elizabeth Heinbach took seventh in the mile, clocking a 17:44.23 (23 points).

Check back throughout the weekend for recaps of each day at the ECAC Championships in the Bronx as the Ducks look to defend their 2012 title.

BRONX, N.Y. (December 7, 2013) – The Stevens Institute of Technology women’s swimming team is in second place after two sessions at the 2013 ECAC Championships in the Bronx. Lehman College is the host school this year.

Saturday Morning Session:
Senior Megan Lisbon was Stevens’ top finisher in the first event of the day – the 200-yard backstroke – clocking a 2:09.74 and pocketing 28 team points for the Ducks. Junior Maria McClure was fifth, sophomore Katlyn Christenson was seventh and rookie Claire Hendershot was ninth with times of 2:11.09, 2:11.89 and 2:13.55.

Junior April Lawson was a winner in the 100-yard freestyle with a 53.03, tallying 32 points, while freshman Danielle Caruso and sophomore Jennifer Rutledge were fifth and seventh (53.64, 53.79).

Sophomore Elizabeth Heinbach, McClure and junior Sharon Rooker all placed in the top-10 in the 200-yard butterfly. Heinbach touched at 2:09.98 in third, McClure finished with a time of 2:12.95 in ninth and Rooker was 10th with a 2:13.24 as the trio combined for 63 points.

Junior Brittany Geyer tallied Stevens’ second win of the day with a meet-record and NCAA B-cut of 2:17.47 in the 200-yard breaststroke. The three-year veteran tallied 32 team points and was ahead of the field by more than nine seconds. Sophomore Elena Piper took eighth and 22 points with a 2:28.06.

Saturday Evening Session:
The 200-yard  freestyle relay was the first event of the evening session, and the Ducks placed second with a 1:37.57 (56 team points).

Geyer put an exclamation point on the Saturday action with a win, meet-mark and B-cut in the 400-yard individual medley in what was her third individual top-spot of the day (4:27.76). She was followed by Heinbach in fourth (4:37.45).

Stevens is currently in second place with 938.50 points. NYU is in first with 1,202.50 points as both teams will finish action Sunday.

BRONX, N.Y. (December 8, 2013) – Junior Brittany Geyer was the Swimmer of the Meet, leading the Stevens Institute of Technology women’s swimming team to a second-place finish at the 2013 Eastern Collegiate Athletic Conference Championships at Lehman College in the Bronx.

Geyer totaled 128 points to earn the Swimmer of the Meet honor, and was joined in the top-10 by freshman Danielle Caruso who had 111 and sophomore Elizabeth Heinbach with 96.

Junior Sharon Rooker, Geyer, junior Maria McClure and junior April Lawson kicked off the Sunday action with a 3:54.39 and win in the 400-yard medley relay, picking up 64 team points.

Sophomore Jennifer Rutledge and Lawson were second and third in the 50-yard freestyle, racking up 55 team points with times of 24.37 and 24.50, while Geyer recorded a new meet-record with a 2:08.17 in the 200-yard individual medley. Sophomore Elena Piper was fourth with a 2:11.52 as duo brought in 58 team tallies.

Caruso, junior Nicole Miller, Lawson and Rutledge ended the championships with a second-place finish in the 400-yard freestyle relay, combining for a 3:35.19 and 56 points.

Stevens will now go in to the winter break before taking a team training trip in early January.

The above are press releases taken from the Stevens Athletic Website. For complete meet results, click here.