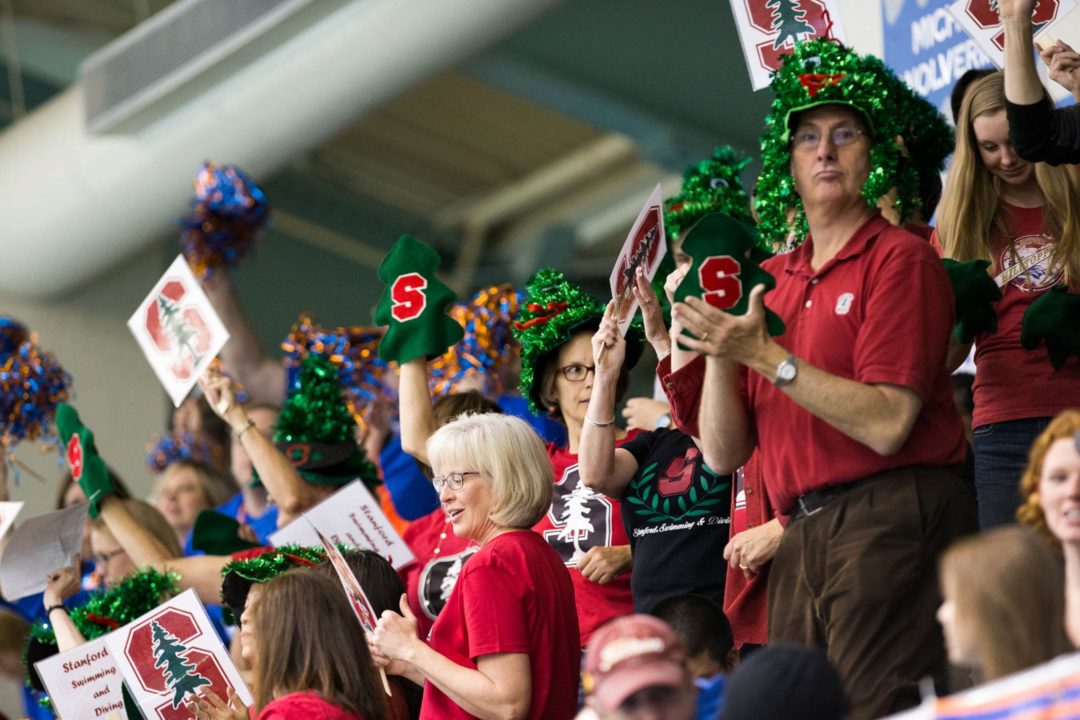 Stanford won the 400 freestyle relay at the 2015 NCAA Championships, breaking the NCAA, US Open, and American records. Archive photo via Tim Binning/TheSwimPictures.com

The Stanford Cardinal closed the meet with a bang, breaking the American record in the 400 freestyle relay by 2 seconds and the US Open/NCAA Record by a full second. The team of Lia Neal, Janet Hu, Lindsey Engel, and Simone Manuel combined to post the fastest time in history at 3:08.54.

California was also under the previous American record with a time of 3:09.76 to finish second. The most significant split from California’s relay was Missy Franklin’s lead off. She was 46.66 to open the relay.

With Missy Franklin by her side, Lia Neal also had a great lead off leg. She dropped 3 tenths of a second and broke 47 for the first time, leading her relay off with a time of 46.84.

It seems Lia Neal is back to best times again – Manuel is on fire ! very fast relay to finish the meet . Congrats to all teams and to the Gold Bears for the overall victory .

Amazing relay!
And with all the fatigue from the entire meet, that’s even still more impressive.
Amazing Simone Manuel again in her 13th swim of the meet.
Great performances from the freshmen Hu and Engel too.
And very impressive Lia Neal in her 4th 100 free of the day broke her PB and swam for the first time of her career under 47 seconds. It supports my prediction of seeing her in the US 4X100 free relay team in Rio with Abbey Weitzeil, Missy Franklin and Simone Manuel.
Congrats girls and congrats to the coaches too.

Three freshmen and a sophomore. Wow.

I’m very impressed with that split from Simone given that it was her 6th 100 freestyle of the weekend and her 4th of the day. She’s the real deal.