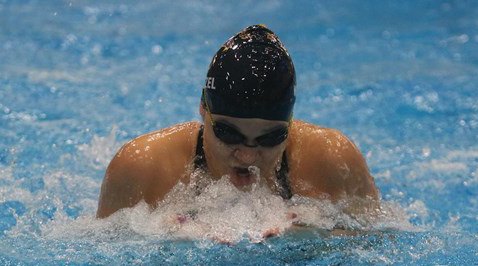 The NCAA Division III Record in the women’s 200 yard breaststroke fell on Saturday evening in Minneapolis when St. Kate’s sophomore Jordyn Wentzel swam a 2:11.85. That cleared her own MIAC Record of 2:12.59 swum at the 2019 NCAA Championships and also broke Sam Senczyszyn‘s D3 record of 2:12.20 that was set in 2016.

Wentzel’s best time coming into college was a 2:15.00, which is almost identical to what Senczyszyn’s was when she first arrived at UW-Eau Claire (2:15.07). Senczyszyn was originally a University of Arizona commit before opting to go the Division III route instead.

She scored 49 points individually at last year’s NCAA Championship meet, including a 2nd-place finish in the 200 breaststroke behind Denison’s KT Kustritz, who very-nearly broke the record in the national final last year. Kustritz, who is the NCAA Division III Record holder in the 100 breaststroke, returns for Denison this season as the defending champion in both breaststroke events. The NCAA Division III Record holder Honore Collins from NYU also returns as a senior this season.

St. Kate’s (aka Saint Catherine University) won the MIAC title with 700.5 points, ahead of Saint Thomas with 664. That is the team’s first-ever MIAC title.

She has zero competition in MIAC, and dominates the meet, most likely without taper or shave!! Looking forward to BR showdowns at D3 Nationals.