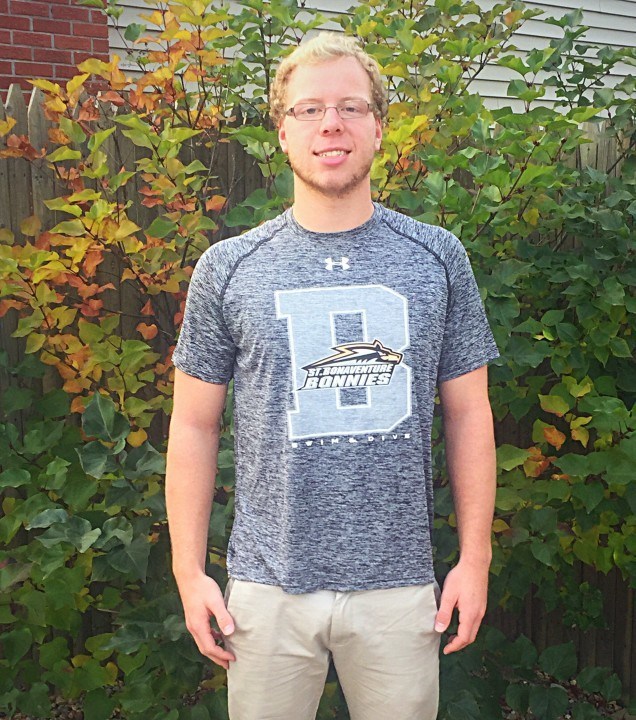 Erdley, a backstroke and mid-distance freestyler, won the 100 back (53.88) and took second in the 200 free (1:47.98) at his district meet last season, Pennsylvania Interscholastic Athletic Association District Six Championships. He also competed at PIAA State Championships but didn’t make it to finals. Here are his fastest times:

The NCAA Division I St. Bonaventure men, coached by Sean McNamee, took second in Atlantic 10 Championships last season. Burdo should be able to make a splash both in the individual and relay events. At last year’s conference, the Bonnies’ 400 free relay members split from mid 43’s to mid 45’s, which falls right within Burdo’s sights. Plus, all four relay members (Michael Pilyugin, Vatslav Lets, Ripley Danner, and Viacheslav Shchukin) will have graduated by the time freshmen get to campus in the fall, leaving multiple spots open for a sprint freestyler like Burdo. He falls a bit farther out of range in the 200 free relay (19.83 to 20.47) and the 800 free relay (1:36.94 to 1:38.87), but each of those relays were also composed of mostly upcoming graduates.

Erdley would not have made finals in any Atlantic 10 event, but he should expect to see some improvement in his first year.

“I decided to commit at Saint Bonaventure University because the ‘team’ aspect of their swim program was more like a family aspect,” Burdo said. “The coach, who showed great leadership and coaching skills on the deck, had a great bond with all of his swimmers. As a result of the team and coaching staff working so well, the success has been proved time and time again, a large reason I chose Saint Bonaventure. They are looking for guys to be apart of a championship team, that is something everyone likes to hear.”