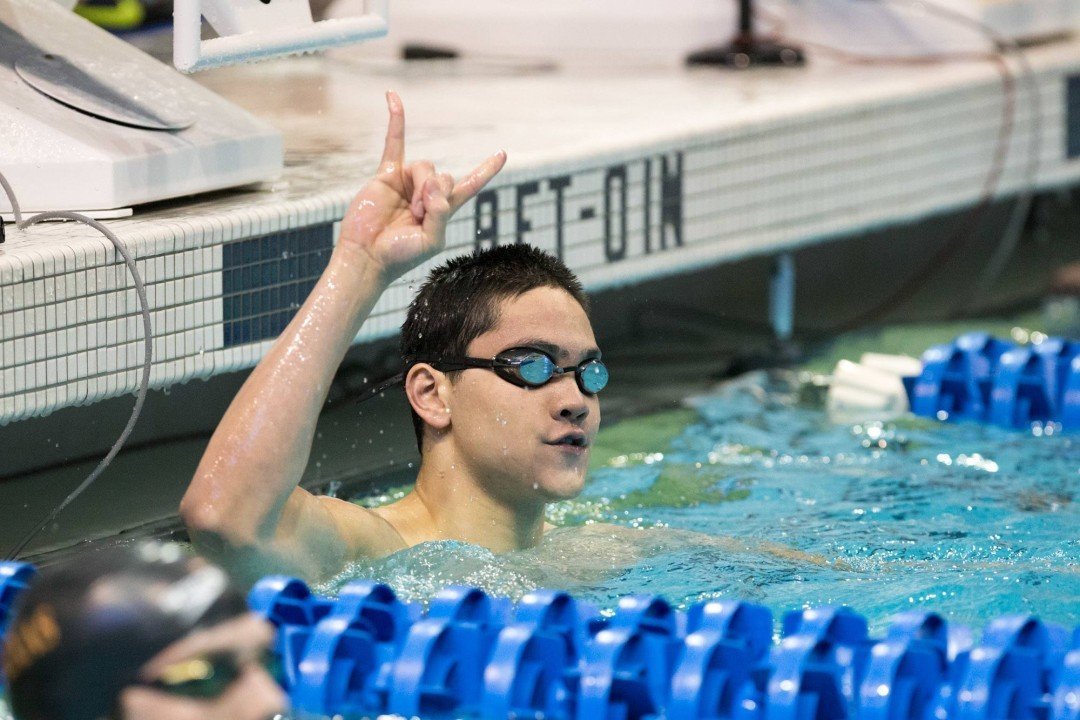 Joe Schooling and the Longhorns are our unquestioned #1 Current photo via Tim Binning/TheSwimPictures.com

Down But Not Out, NC State Projected to Outscore Louisville and Virginia Tech

NC State bounced back this morning with a strong session, and is projected to outscore Louisville and Virginia Tech tonight, but it’ll be a tight race.

Three swimmers were disqualified in lane 2, and another in lane 3, in the 200 breaststroke and 200 butterfly on Saturday morning.

Heat sheets for the final day of the 2021 ACC Men’s Championships reveal a few interesting choices for the top teams as they vie for the title.

Following up last week’s Women’s rankings, here’s our first version of the 2015-16 NCAA Men’s Power Rankings.  We’ll continually refresh these rankings every 2-3 weeks, including short anecdotes of the NCAA’s top 20 teams.  It’s (very) early in the year, so these rankings are a mix of both how the teams have looked so far, and, ultimately, the team’s end-of-season prospects.

In addition, here’s some other factors we considered (these haven’t changed from last season):

Took down rival Minnesota, and Cannon Clifton and Brett Pinfold give the Badgers a 1-2 sprint punch worth watching.

No meets yet, and no NCAA points last season, but that freshman class is hard to ignore.

The Tarheels took just one swim race in their loss to #8 Georgia, but that race was a good sign; freshman Zu Pigot from Suriname won the 100 fly in 47.3, taking down Gunnar Bentz, Taylor Dale, and All-American teammate Sam Lewis.

Yes, seriously; South Carolina is returning every swimmer from last year’s NCAA squad that finished 19th, and added freshman distance stud Cody Bekemeyer to the mix.  After winning the FGCU invite and topping Purdue, the Gamecocks will take on #7 Alabama this weekend.

Unclear: the Buckeyes have yet to compete in an official meet, but are bringing back most of their key pieces besides Michael Disalle.

The Cardinals are bringing back almost everyone from last year’s 15th-place squad, and added Max Grodecki, who was 43.19 in the 100 free two seasons ago.  Their first big test is tonight against #11 Tennessee.

A lack of depth and distance swimmers tripped them up against #11 Tennessee, but between Michael Chadwick, Carter Griffin, and Fabian Schwingenschlogl, the Tigers have a solid core.

The Hoosiers took Florida down the wire in their trimeet with Texas two weekends ago behind big efforts from Blake Pieroni and Tanner Kurz.  However, they put up great times at this meet last season as well, only to remain flat until February.

Topped Missouri and Virginia behind their distance duo (David Heron and Evan Pinion) and Sean Lehane, who hasn’t lost an individual race through four meets this season.  They have another challenge this weekend against #14 Louisville.

A lot of graduates, plus Tom Kremer redshirting put the Cardinal in a precarious position (no returning NCAA individual points), but they looked good against Utah; sprinter Sam Perry is already at 20.0 and 44.3.  The real test will be #4 NC State next weekend.

Still talent on the roster, but the sprint freestyle cupboards are empty; three of four legs on the 200 and 400 free relays are either graduated (Cristian Quintero, Luca Spinazzola) or redshirting (Dylan Carter, Santo Condorelli).  Things will look better next semester when Carsten Vissering, Patrick Mulcare, Ralf Tribuntsov, and Alex Valente officially join the squad.

Chase Kalisz is redshirting, but the Bulldogs are loaded in his best events.  The loss of Nic Fink might be harder to overcome.

Fell to Auburn, but continue to impress after last season’s big jump.  Luke Kaliszak is well ahead of where he was at this time last season.

They were edged in both relays against rival Alabama, but they’re a complete team with a legitimate NCAA scorer in every event that’s 200 yards and under.  Joe Patching and Michael Duderstadt have been excellent so far.

Not much to see at this point.  The Wolverines cruised through a long course trimeet with Purdue and Michigan State at the beginning of the month and haven’t had an official meet since.  Things kick up this weekend against Virginia and Penn State.

Last year doesn’t look like a fluke; NC State looked scary good against Florida State.  The Wolfpack are going toe-to-toe with top competition this fall; after flying to the Bay Area to take on #10 Stanford and #2 Cal next weekend, NC State will host the defending champion #1 Texas Longhorns on 11/14.

Looked very solid against Texas; Jack Blyzinskyj is off to a great start.  The problem?  No breaststrokers, meaning Caeleb Dressel has to swim his third-best stroke on Gator medley relays.

No sprint breaststrokers, but Josh Prenot and Andrew Seliskar will do the job just fine.  The Bears rolled through Utah, and are set up for a big meet next weekend against #4 NC State.  Will be interesting to see how their lack of sprint freestyle depth fares against NC State’s high-powered group.

Unquestionably #1.  Did you see that intersquad meet?

Never been so insulted in my life. Harvard, Duke, Wisconsin and UNC and we aren’t

0
0
Reply
Has been
Reply to  OldSwimDad

^^agreed… Fallen off a cliff

0
0
Reply
ArizonaSwimmer
Reply to  Has been

Have you seen the freshman class they have? Dobbs, Jones, Bish, Idenson, Sanders. All NCAA qualifiers this year. Plus a great junior class and sophomore supporting class. You guys are dumb if you think they’ve fallen off

Stop embarrassing the program. Be supportive of the rebuild that Rocket and Co. are doing, but don’t bring out that negative energy. It is only an initial ranking, the season is young, let the new guys prove themselves. #BTFD

Give Mathias Oh some respect and put him on that list.

well… i guess now you have some motivation then?

How is ASU #21 on the CSCAA list? They are not very good, and having Bob Bowman doesn’t mean that you should automatically make it.

I understand your frustration with ASU being ranked, but every swimmer on their team is going to the olympics anyways because of Bob Bowman.