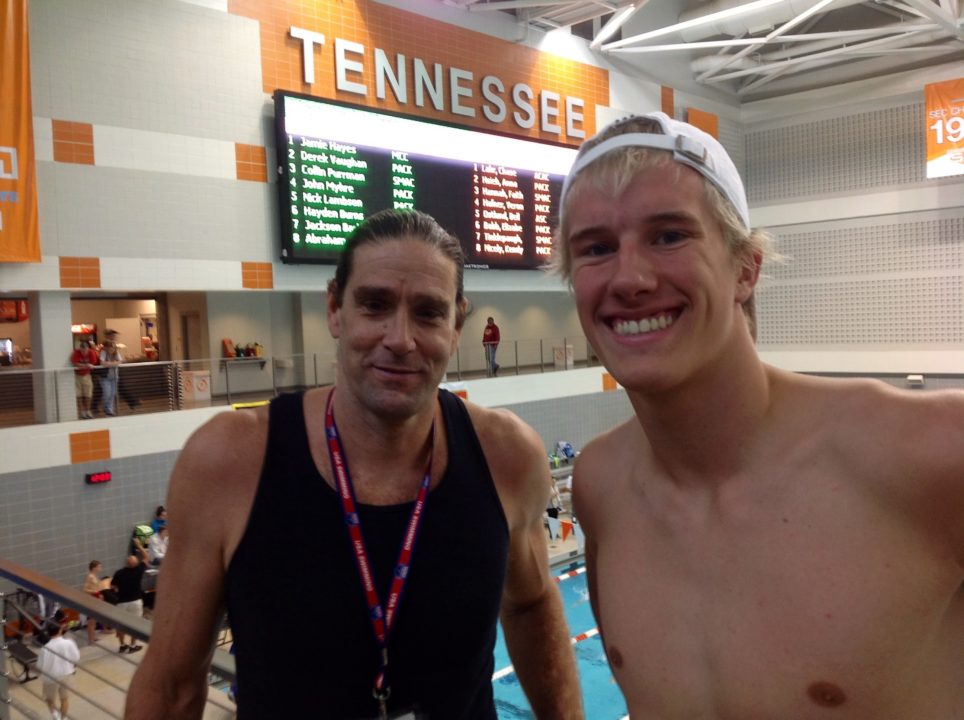 With the World Cup quiet, and the Grand Prixs not yet started, there was some time over the weekend for the high school swimmers to shine. Today’s edition of Sprint News will focus on those swims.

…In Florida, the high school district championship meets kicked off; there, in Division 1A, District 2, the Bolles boys and girls took both team titles and qualified the maximum on to the Regional level (an impressive feat). Both teams are going for history, with the boys looking for a 25th-straight State Championship, and the girls going for a 22nd-straight. If the Bolles girls were to take the state crown this year, it would break a tie with Pine Crest for the most consecutive State titles won by a girls’ squad.

Ryan Murphy, who recently made his commitment to Cal as one of the top two recruits in the country, won a single individual event and led off all three winning relays as well. In the 100 back, he’s already going a 49.30: and that’s with Bolles clearly being far from rested based on other swims.

The strategy for the Bolles boys in this year’s post season is clear. With a State Title seeming to be as close to a possibility as sport will allow for, they are going after records. This team has already broken both the 200 and 400 free relay records this year, and given that their three big guns (Murphy, Santo Condorelli, and Joe Schooling) each only swam one individual event and three relays, they’re out for more blood.

On the girls’ side, the Bolles freshmen showed the future of the women’s team is strong, despite big graduations. Chloe Miller took her first District title in the 100 fly, winning in 59.69, and Olga Lapteva was the runner-up in the 100 breaststroke. There, she lost out only to senior teammate Ashley Neidigh in 1:06.84. (1A – District 2 results here).

Elsewhere, in the south end of the state, a huge congratulations goes out to the girls of St. Andrews, as the Lady Scots ended a 24-year run of dominance by Pine crest in 1A District 10. This St. Andrew’s team could be good for a long time. Aside from Texas commit Tasija Karosas (winner of the 100 back in 56.13 – a new Pool Record in her home course), this is a team largely built around freshmen and sophomores. Rachael Bradford-Feldman, for example, won the 200 IM in 2:04.49. (1A – District 10 results here).

A full rundown of the Florida Championships, which just wrapped up Tuesday due to Hurricane Sandy, is available here…

…A young Georgian named Paul Powers hasd been rising in the sprint ranks for about a year now. He’s a junior from Gainesville (Georgia) and swims for Splash Aquatic Club, and won the 50 free Georgia HS title last year, as well as the 100 in long course at the Swimvitational.

If you hadn’t heard of him before, let us introduce you: Powers broke the Georgia 15-16 State Records in both the 50 and 100 freestyles over the weekend at the Pilot Aquatic Invitational on the University of Tennessee campus, swimming 20.23 and 43.99, respectively. Those swims take down records held by big-names of Brent Murrayand Matias Koski, respectively. His swim in the 50 also cleared Michael Arnold’s 17-18 LSC Record.

He’s only the 3rd 16-year old in history to go under 44 seconds in the 100 yard free, and the first in nearly a decade. (The other two were the legendary Joe Hudepohl and Kyle Bubolz).

Powers has at least through this year’s Georgia State Championship meet before he ages up, and has set a goal of becoming the first 16-year old to go under 20 seconds (Ryan Murphy currently holds the NAG Record in 20.02). Considering his potential, he’s 6’5, weighs 205 pounds, and benches 235; and also plays basketball. He has every opportunity to reach that potential, as his coach is Andrew Deichert, formerly of the Race Club: one of the most successful sprint groups in swimming history.

The Wyoming 3A and 4A State Championship meets were held last weekend in Gillette, Wyoming, and a 7-year streak came to an end when Cheyenne East took the state crown in dominant fashion, edging out Cheyenne Central and Campbell County High School. That ended a 7-year title run from the Campbell girls in Class 4A.

East didn’t actually win a single individual event, but with a good mix of youth and experience, plus enough bodies to fill out three stellar relays (including a winning 200 medley), the title was their’s. That included a 2nd-place finish from Jonna Brown in the 100 breaststroke in 1:08.28 – finishing just .02 seconds behind Kelly Walsh’s Iliana Jones.

Other big swims from the 4A meet included Campbell junior Kelsey Ochsner winning the 100 fly in 56.23 (she should be a notable D-1 recruit in the class of 2014) and still-uncomitted senior Sarah Morgan from Laramie High winning the 100 free in 51.92.

Thanks for the props on our girls team at Saint Andrew’s – we have great respect for Coach Jay Fitzgerald and the tremendous tradition at Pine Crest and it was a hard-fought victory. Take a look at those 1A District 10 results and let me know if there is a tougher District Meet in any division in the State … we expect more of the same with the 1A Region 4 Meet set for Saturday at Nova Southeastern University.
The problem with all that is we keep knocking out swimmers who could score at the next level in favor of the FHSAA’s current system of advancement. I would love to get some momentum behind a movement to add a… Read more »

Congrats to Powers. One thing to keep in mind is that he IS BENCHING WEIGHTS. Most swimmers in established clubs are not being encouraged to lift. Bottom line…that makes a huge difference. He had a private trainer and he has built muscle that other kids haven’t even started working on yet. Let’s compare apples to apples.

The best apples to apples comparison I can think of are swimming times. They are posted right there. I’m not sure what you are suggesting. Should we only compare swimmers based on their training strategies or resources? Is it unfair that he is lifting?

So lame. Should we create seperated records for ‘those who lift’, ‘those who do doubles’, and ‘those who aren’t trying to better themselves’?

“Most swimmers in established clubs are not being encouraged to lift.”

Although I agree that this is happening, it is one of the biggest farces in all off sports. There is no scientific reason why kids should lift weights, as long as they are in an environment where they get proper feedback and monitoring.

News Flash: Today’s sprinters look like defensive backs and linebackers! If a kid wants to have a shot at being a top sprinter, they need to lift. People like to use MP as the example for not lifting until you’re 18, but nobody is asking Bosquet/Cielo/etc. when they started resistance training.

Ben- I’m not getting your post, are you saying that swimmer’s shouldn’t lift? and I’m curious about all the research that you have done on studies about the benefits of strength training for swimmers. Can you point to any specific written work that has been published in the last 10 years?

Most sprinters going 43’s in high school aren’t playing two sports, either. I guess he gets some points back for that.

What points does he get? He isn’t swimming to his potential? You don’t get “points” for not being a full time swimmer. Why do we give people credit for doing well while not being “all in” to develop their skills? I am not saying we should be critical of him but we certainly should be getting “points” for it…..

Gc – that’s precisely what I mean. Can’t discredit his times in the record books for lifting weights, just like you can’t give him extra credit for playing two sports.

Who cares if HE IS BENCHING WEIGHTS? His chest does not look particularly developed for a guy that is BENCHING A WEIGHT. He looks like he could develop a lot more. Maybe not, but no one can really know for sure.

I can only imagine that his weight program includes other forms of lifting than benching. I can only speculate that his real strength is in his legs and his quickness……

So what are you waiting on. Swimmers are some of the best athletes around.

I agree Coach Sid. The Florida system is in need of an overhaul. Under the current system, why bother having a B final if you can only advance from A final to the next level.