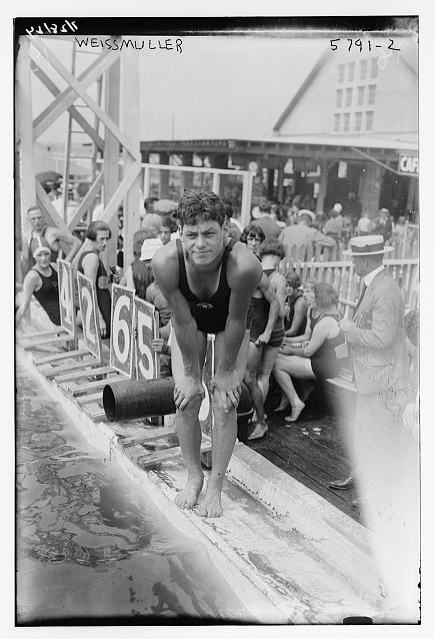 Johnny Weissmuller, later famous as Tarzan of the Apes, held the world record in the men's 100 freestyle for 12 years, from 1922 to 1934. Archive photo via Library of Congress

This article is the sixth and final part of a series of adaptations from the book SPLASH! 10,000 Years of Swimming, written by Howard Means and published by Hachette Books.

No major sport has evolved more than swimming over the last century and a quarter. Consider the Olympics. The first modern Games, in Athens in 1896, were a threadbare nod to the sport — three freestyle events open to everyone and a fourth race for Greek sailors only, all in the Bay of Zea. The 1900 Games in Paris included a bit of carnival fun: a 200-meter freestyle race that required climbing over a pole and a row of boats and then swimming under another boat row. The 1904 Olympiad in St. Louis added maybe the most singular event ever seen in the Games, the Plunge, in which contestants took off from a height of 18 inches, hit the water, and then floated as far as they could without doing anything at all for one full minute. (Winning distance: 62.5 feet.) Eventually, Olympic swimming settled down, but butterfly wasn’t added to the Olympic roster until 1956, which meant the four-stroke individual medley and medley relay had to wait as well.

Out of the water, things are in some ways even more whacky. Starting blocks, lane markers, even swim suits and goggles are engineered these days to almost NASA-like specifications and calibrations — so much so that comparing times across generations is all but impossible, although I couldn’t resist trying. Meanwhile, swimmers the world around have been taking to open water as never before in modern memory, perhaps in rebellion against the industrialization of swimming or perhaps simple because there’s nothing quite like the sensation of the sun on your back, water beneath you, and nowhere to particular go as you stroke along.

Three scenes from the 1908 Olympics in London. Top, competitors in the 200-meter breaststroke take off from a bulkhead draped with towels to keep from slipping. Middle, dapper American Charlie Daniels, the 100-meter freestyle champion and newly crowned as the fastest swimmer in the world.  Daniels doubled as squash and bridge champion at the New York Athletic Club. Bottom, water polo had been introduced to the Games in 1900, but it was closer to a wet brawl than the fast-paced aerial game we know today. Think of a rugby scrum that includes oxygen starvation.

(Both: Library of Congress)

At left, Johnny Weissmuller, later famous as Tarzan of the Apes, and at right, Duke Kahanamoku, the Hawaiian swimming champion and godfather of surfing. Between the two of them, they held the 100-meter freestyle world record continuously for 22 years, beginning in 1912. Weissmuller’s “starting blocks” look as if they might have been cobbled together in scant minutes by a one-armed carpenter.

A tale of two British breaststrokers and the evolving body types and training regimens of championship swimmers. At left, with his coach, is Frederick Holman, gold medalist in the 200-meter breaststroke at the 1908 Olympics. Holman stood 5’10” and was a sturdy 175 pounds.  He died five years later of typhoid fever, contracted while practicing in polluted waters. Below, the newest British breaststroke Olympic champion, Adam Peaty, who took gold at the 2016 Games in Rio at 100 meters. Peaty stands 6’3”, weighs 190 pounds, consumes while training about 7,500 calories daily, monitors his testosterone levels as meet days approach, spends hours daily in the gym, and does twice-a-day workouts in the pool. As this photo shows, the results speak for themselves.

The wonderful world of swimming science: Part of Nike’s patent application for a new line of strapless goggles, basically twin monocles. The patent application contends that the goggles will shave .146 seconds off a swimmer’s time in the 100-meter freestyle.

According to Nike, the goggles are to be held in place by “contracting the orbicularis oculi muscles” — i.e., squinting — which might be one too many things to worry about in top-notch competition.

In swimming as in many endeavors, sometimes there’s no substitute for raw courage. Going into the 1960 Olympics, Jeff Farrell was heavily favored to win the 100-meters free, but six days before  the trials, he was operated on for appendicitis. Day 3 after surgery, he couldn’t manage a doggie paddle. By Day 5 he was able to take regular strokes. Here he is on the blocks on Day 6. The plastic-wrapped gauze bandaging his wound is sticking out of the top of his racing suit.  Farrell won his semifinal heat but hit a lane marker in the final and finished third. He still took home a gold, though, in the 4×100 relay.

We humans were destined to swim. We’re 70 percent water, almost exactly the same as the oceans that surround us, and many of us are fortunate enough to live on outcroppings of land edged by beaches or cut through with rivers and pockmarked by lakes.

Water beckons us at every turn, but so too, I hope, does watery fun, sheer aquatic nonsense, as per this family triple-decker from the later half of the 1980s: I’m at bottom, surmounted by son (Nathan), and daughter (Ihrie) on top.

Christine Lake in northern New Hampshire, a near-perfect watery expanse for swimming shore to shore and back again. When I swam it two summers ago, a loon whooped maniacally off to one side. The sun was hot, the water almost cold enough to make my teeth hurt. I had a hundred feet of water beneath me and was completely connected to where I was. Perfect.

More From This Series

Choose a stroke and get paddling through the human history of swimming!

From man’s first recorded dip into what’s now the driest spot on earth to the splashing, sparkling pool party in your backyard, humans have been getting wet for 10,000 years. And for most of modern history, swimming has caused a ripple that touches us all–the heroes and the ordinary folk; the real and the mythic.

Splash! dives into Egypt, winds through ancient Greece and Rome, flows mostly underground through the Dark and Middle Ages (at least in Europe), and then reemerges in the wake of the Renaissance before taking its final lap at today’s Olympic games. Along the way, it kicks away the idea that swimming is just about moving through water, about speed or great feats of aquatic endurance, and shows you how much more it can be. Its history offers a multi-tiered tour through religion, fashion, architecture, sanitation and public health, colonialism, segregation and integration, sexism, sexiness, guts, glory, and much, much more.

Unique and compelling, Splash! sweeps across the whole of humankind’s swimming history–and just like jumping into a pool on a hot summer’s day, it has fun along the way.