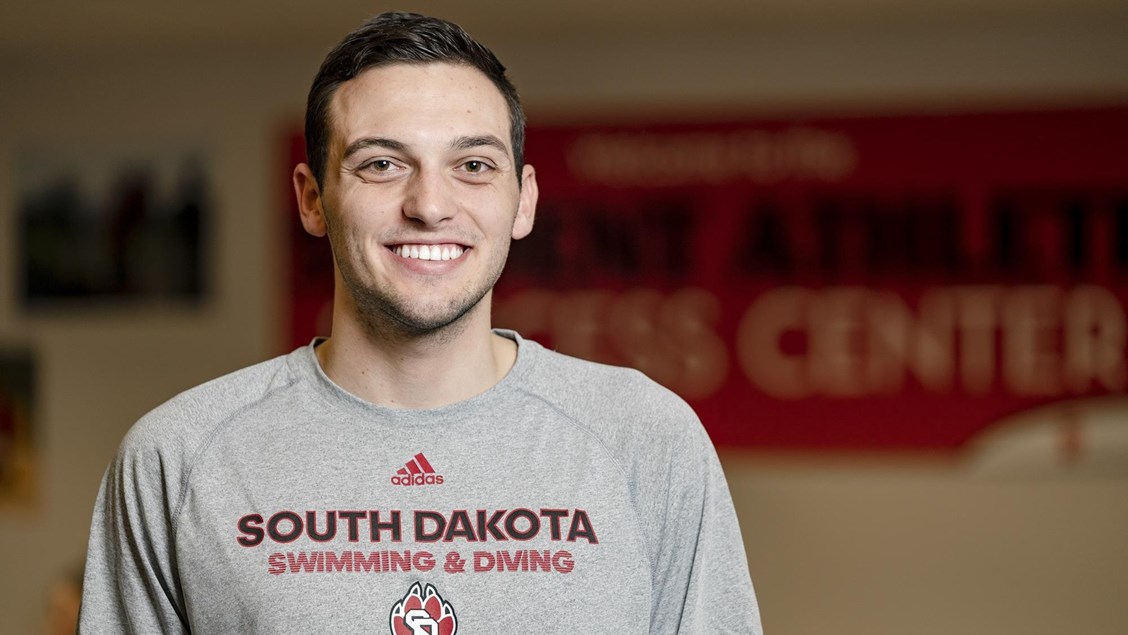 University of South Dakota swimmer Josh Sorbe has been awarded a $30,000 Truman Scholarship. In addition to the money, Sorbe and other awardees receive priority admission to certain graduate and professional schools across the country.

Created by the U.S. Congress in 1975 in honor of the 33rd president of the United States, Harry S. Truman, the award supports continued education of those wishing to pursue a career in public service leadership.

Sorbe and 61 others were chosen from among 199 finalists, and 840 original nominees, to receive the honor.

Outside of the pool, he’s a past president of the USD Student Government Association, interned with former United State Representative Tim Walz in Washington DC, and serves as the executive director of the South Dakota Student Federation.

“Josh exemplifies what it means to be a STUDENT-athlete,” said USD head swimming and diving coach Jason Mahowald. “He has consistently demonstrated that you can be a great leader on campus as well as on the athletic field. We are unbelievably excited for Josh to receive this honor, and know that he will continue to be a leader on our campus.”

In addition to the financial benefit, Scholars receive priority admission and supplemental financial aid at some premier graduate institutions, leadership training, career and graduate school counseling, and special internship opportunities within the federal government. Recipients must be U.S. citizens, have outstanding leadership potential and communication skills, demonstrate academic excellence, and be committed to careers in government or the non-profit sector.

Sorbe says that he plans to be a public school teacher in his native state of South Dakota after graduation.

Prior winners of the award include a veritable hall-of-fame of public service. Among the highlights of a list of name full of them are Janet Napolitano, the former Governor of Arizona and Secretary of Homeland Security (and current president of the University of California); New York City mayor Bill de Blasio; United States Supreme Court justice Neil Gorusch; Missouri governor Eric Greitens; and Wired magazine editor-in-chief Nicholas Thompson.

Congrats to Josh’ Sorbe on his great accomplishment and to SwimSwam for reporting it.

When NCAA Division I sports and it’s fans has seemed to forget the aspiration of having students athletes this is inspirational.

Outside of the swimming community no one will care if Josh swam 500 free in 4:38 or 4:08, but they’ll be pretty impressed by the Truman Scholarship.

Dang distance swimmers, always working hard and making the rest of us look lazy. Not content to stop outside of practice, either. What a stud.