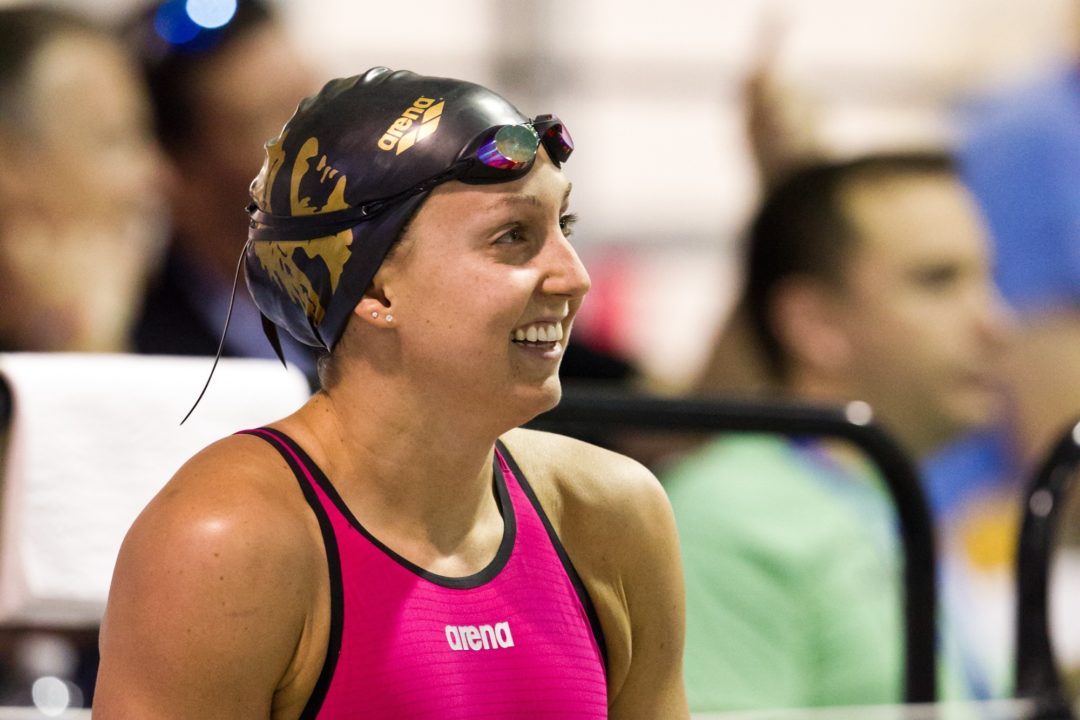 The 2012 Speedo Grand Challenge in Irvine, California kicked off Friday night, and pitted some of the biggest stars of the pro ranks with many of the names that became more familiar at the recent California High School Championships.

There are also a few guests in town for the affair, including Sarah Katsoulis from Australia and the next big Chinese sensation, 14-year old Zhou Min from China.

The format of the Grand Challenge narrows the A-Final to just four competitors, followed by full B-and-C heats.

The best race of the session was the women’s 100 breaststroke, where Trojan training partners Rebecca Soni and Jessica Hardy squared off in the A-final; separated in the lanes by Australia’s Sarah Katsoulis and Britain’s Kate Haywood.

After about 35 meters, it was pretty clear that this was a two-swimmer race between the two Americans. They came home stroke-for-stroke, but true-to-form, Soni tore through the back half of this race (splitting a 34.58) to win in 1:06.57; Hardy was 2nd in 1:06.81.

That separation is about seven-tenths off of both swimmers’ best times, which shows that both are in good shape headed towards trials, that start exactly one month from today.

The two Commonwealth swimmers weren’t in the main battle, but they did have an outstanding race of their own. Katsoulis ended up getting to the wall just barely ahead in 1:09.28, while Haywood finished in 1:09.29.

Recent USC transfer Andrea Kropp won the B-Final in 1:10.11 – she was better in Columbus, but it’s still a good time for her. Wisconsin swimmer Ashley Wanland had a great start, and was just behind Kropp in 1:10.22, followed by a 1:10.48 from Kasey Carlson.

In 3rd was Wisconsin swimmer Michael Weiss. He had a great college season, and continued to swim well here in this meet with a 1:52.12 – that’s by far the fastest he’s ever been outside of a big taper meet.

Eric Shanteau topped the men’s 100 breaststroke in 1:01.16 to continue a hot 2012 season. This is the third different meet this season where he’s been faster than he was in all of 2011.

Jessica Hardy topped the 50 free in 25.11; that’s a good swim for her, but we’re going to focus on the swimmers who came in behind her. For starters, Wisconsin freshman Ivy Martin took 2nd in 25.76. That’s by far a best time for a swimmer who has been one of the biggest success stories early in the Whitney Hite era in Madison.

Then, we’ll look down to the B-final, where Phoenix Swim Club’s Keaton Blovad won in 26.49. A solid time – until we consider that she’s only 13. That makes it an unbelievable time. She was great as an 11-12, but only a few months into the 13-14 age group, this is already her best time by just over a second. That swim ranks in the top-10 times ever posted by a swimmer her age.

Close behind her was high school star Megan Rankin in 4:13.89. The CIF Southern Section star, who’s headed to UCLA next season, was within three-tenths of her best time with that swim.

Soni is just an impressive breasstroker !!! even if her technique is unusuallly unique , she is owesome . Way to go for trials . Jeahhhhhhh !

The wisconsin team was on fire! Ivy martin especially, she already has her trial cuts so i cant imagine shes rested at all which makes that times that much more impressive! Look out for her in the future. her and aja van hout will be the new stars of the badgers, hopefully bringing the team to great places!