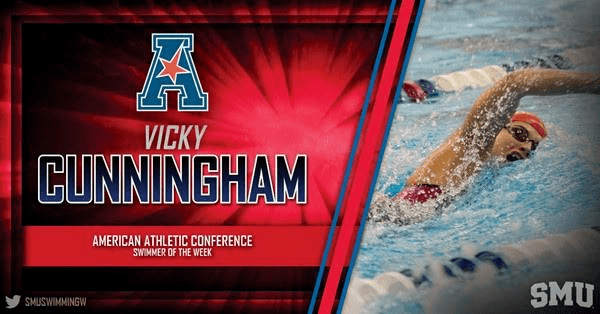 The American Athletic Conference has announced the winners of the league’s swimming and diving honors for the week ending Dec.... Current photo via SMU Atheltics

The American Athletic Conference has announced the winners of the league’s swimming and diving honors for the week ending Dec. 4.

AMERICAN ATHLETIC CONFERENCE MALE SWIMMER OF THE WEEK
James Donlevy • Jr. • UConn • Lake Grove, N.Y.
Donlevy placed first in the 50-yard freestyle in a double-dual meet against Boston University and Yale on Saturday. The junior covered the distance in 20.92 to win the 50 free. Donlevy added a runner-up finish in the 100-yard freestyle with a time of 46.32, missing first by two-hundredths of a second.

AMERICAN ATHLETIC CONFERENCE FEMALE SWIMMER OF THE WEEK
Vicky Cunningham • Sr. • SMU • Chester, United Kingdom
Cunningham produced NCAA B standard times in the 100-yard and 200-yard freestyle A Finals at the 2016 AT&T Winter Nationals. The senior placed sixth in the 100 free (49.39) and took seventh in the 200 free (1:46.71). Cunningham’s times rank second in The American this season.

AMERICAN ATHLETIC CONFERENCE FEMALE DIVER OF THE WEEK
Micaela Bouter • Jr. • Houston • Johannesburg, South Africa
Bouter swept the diving events in a dual meet with Texas A&M in College Station. The junior finished atop the podium in the 3-meter event with a score of 315.08 and handily won the 1-meter with a score of 291.90. The Johannesburg, native remains unbeaten on the 1-meter board.

News courtesy of the AAC.