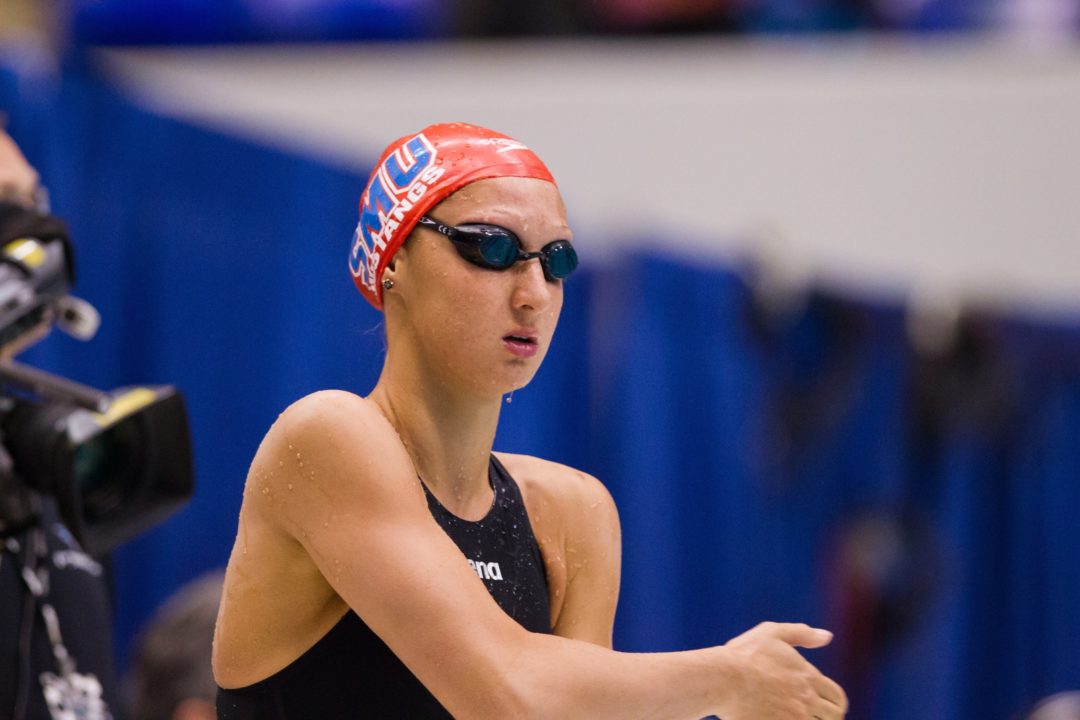 SMU is receiving votes in the latest version of the NCAA/CSCAA rankings. The Mustangs started the season with a third place finish at the UNT Relays, followed by a fifth place performance at the SMU Classic. Most recently, the team dropped a pair of dual meets at Rice and Houston. FEATURED IMAGE: Nina Rangelova. Current photo via Tim Binning/TheSwimPictures.com

To start 2014, SMU divers are back in action at the Georgia Diving Invite (Jan. 3-5), and the swimmers take to the pool at Texas A&M (Jan. 11). On Jan. 31, the Ponies host North Texas, a team they saw at the UNT Relays on Oct. 4, before gearing up for the inaugural American Athletic Conference Qualification Feb. 19-22. Continuing in championship fashion, the NCAA Zone Diving Championships (March 9-11) and NCAA Championships (March 20-22) close out the 2013-14 schedule.

Ponies In The Rankings…

SMU is receiving votes in the latest version of the NCAA/CSCAA rankings. The Mustangs started the season with a third place finish at the UNT Relays, followed by a fifth place performance at the SMU Classic. Most recently, the team dropped a pair of dual meets at Rice and Houston.

Isabella Arcila was named the American Athletic Conference Female Swimmer of the Week on Nov. 5. The Cali, Colombia, native led SMU at Rice on Friday evening with a record-setting performance in the 100-yard backstroke. Arcila finished in a time of 56.41 to break the previous record, which was set by fellow Mustang Therese Svendsen in 2011.

Arcila also won the 200-yard backstroke (2:01.37) at the event and finished third in the 100-yard butterfly (57.88). To open the event, she contributed to a first place finish in the 200-yard medley relay with a team that included juniors Rachel Nicol and Nicole Parmenter and freshman Ursa Bezan.

Based on the 2012-13 final NCAA/CSCAA rankings, the Mustangs have already faced four top-25 teams this season. USC (1), Indiana (13), North Carolina (15) and Louisville (16) were all present at the SMU Classic. The Ponies, who were receiving votes in the latest edition of the CSCAA rankings, are slated to see numerous top-25 teams during the 2013-14 season.
SMU also clashes with No. 4 Texas A&M and No. 7 Stanford as part of the Texas A&M Invite.

The Cali, Colombia, native finished the event in a time of 56.41, which bested former Mustang Therese Svendsen, for the victory. Arcila also picked up the win in the 200-yard back narrowly out reaching her Owl opponent in 2:01.37, and finished third in the 100-yard butterfly at 57.88.

Senior Nina Rangelova and junior Rachel Nicol also turned in impressive performances for SMU, as the pair combined for five top finishes on the night. Rangelova swept the 50-, 200- and 500-yard freestyle events, while Nicol picked up wins in the 100- and 200-yard breaststroke.

In the relays, SMU outswam four teams for first place in the 200-yard medley. Arcila, Nicol, Bezan and junior Nicole Parmenter clocked in at 1:45.81. To close out the evening, Rangelova, Parmenter, Lindborg and senior Monika Babok finished as the runner-ups in the 400-yard freestyle relay (3:29.90).

The Mustangs started and finished the event with a pair of relay victories as senior Monika Babok and juniors Nicole Parmenter, Rachel Nicol and Nathalie Lindborg clocked in at 1:45.44 in the 200-yard medley relay, and Babok, Lindborg, senior Nina Rangelova and junior Isabella Arcila touched the wall in a time of 1:34.84 in the 200-yard freestyle relay.

Finishing just ahead of Nicol in the 200-IM was senior Deanna Matthews (2:07.25). The Edmonton, Alberta, native also finished the 200-yard backstroke in 2:02.25 for the win and placed third in the 100-back. Just behind Matthews in the 200-back was Arcila, who was second in a time of 2:02.46. Arcila also won the 100-yard backstroke for the second-straight day, after setting the pool record in the Mustangs’ meet at Rice on Friday.