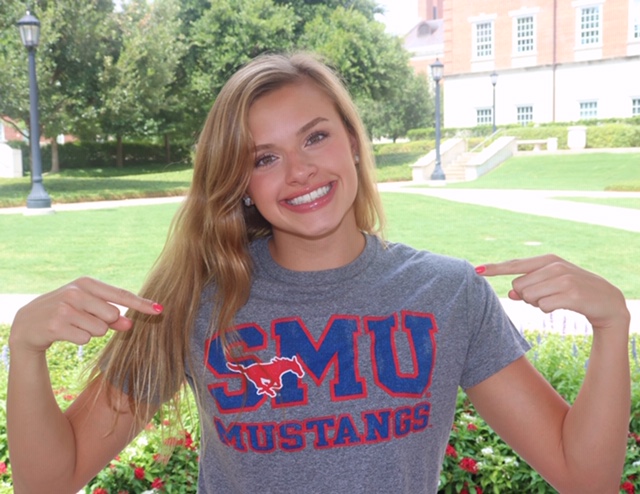 Freshman Jenna Watson was among the individual winners at SMU's annual intrasquad meet, picking up a win in the 200 IM at her first ever college meet. Archive photo via Kristin Duren

The SMU Mustangs kicked off their season with their annual Intrasquad meet on Friday, September 25. The Blue Team was victorious on the men’s side 104-82, wile the Red Team narrowly defeated the Blue Team on the women’s side, 95-90.

The SMU men last season used a huge freshman class to climb the ladder at the AAC Championships, moving from 4th place to 3rd place at the conference meet. This year, with East Carolina and UConn both having cut their teams, the AAC is down to essentially a dual meet between the Mustangs (763 points at AACs) and Cincinnati (838 points at AACs).

In the 200 medley relay the Red Team got the win in a close race, highlighted by a 24.41 breaststroke split from sophomore Colin Feehery, the 2020 AAC champion in the 400 IM.

That split was almost as fast as then-junior Caleb Rhodenbaugh split at last year’s AAC Championship meet for the Mustangs, who touched the wall 3rd at that meet but were disqualified.

The SMU women, who were 2nd out of 6 teams at last year’s AAC Championship meet, kicked off their season on Saturday as well.

It was a session where the SMU freshman shined, picking up several wins throughout the day.

This is an event where the AAC Champion University of Houston women were absolutely dominant last season, taking 5 out of the top 6 spots at the conference championship meet. The presence of Vandenbussche should help chip away at that advantage this season.

Later in the meet, the 100 breaststroke saw another Freshman 1-2 finish. Maddy Lewis finished first in 1:06.70, ahead of Maxine Parkinson, who picked up second place points for the Blue Team in 1:06.89. That was some revenge for Lewis and the red team after Parkinson had the fastest medley relay split to help her team win the opening event of the night.

Vandenbussche’s split is already within 1.2 seconds of what it took to make SMU’s 400 free relay at last year’s AAC Championship meet.

SMU hasn’t released anything official on it, so not sure they’ve made a decision. It seems unlikely they’d keep it a two team meet. More likely scenario would be having the men’s team join Big 12 with UC (to make it an equal amount of male and female teams at 5), or perhaps join a different conference. Keep in mind 2020-2021 will be a weird year, so what happens this year may not be reflective of the future either.

So is that really the plan for SMU and Cincinnati? A two team conference meet?

What a shame for the athletes and coaches. Makes so much more sense for SMU to join the Big XII meet and UC to join the MAC/MVC meet. Gives both those teams a championship experience they deserve and makes each of those meets way better.

SMU vs TCU/WV would give the Big 12 some intrigue. UC/MoState/Miami could be real fun and help ease the loss of EMU and Buffalo. Plus, these moves also make geographic sense.