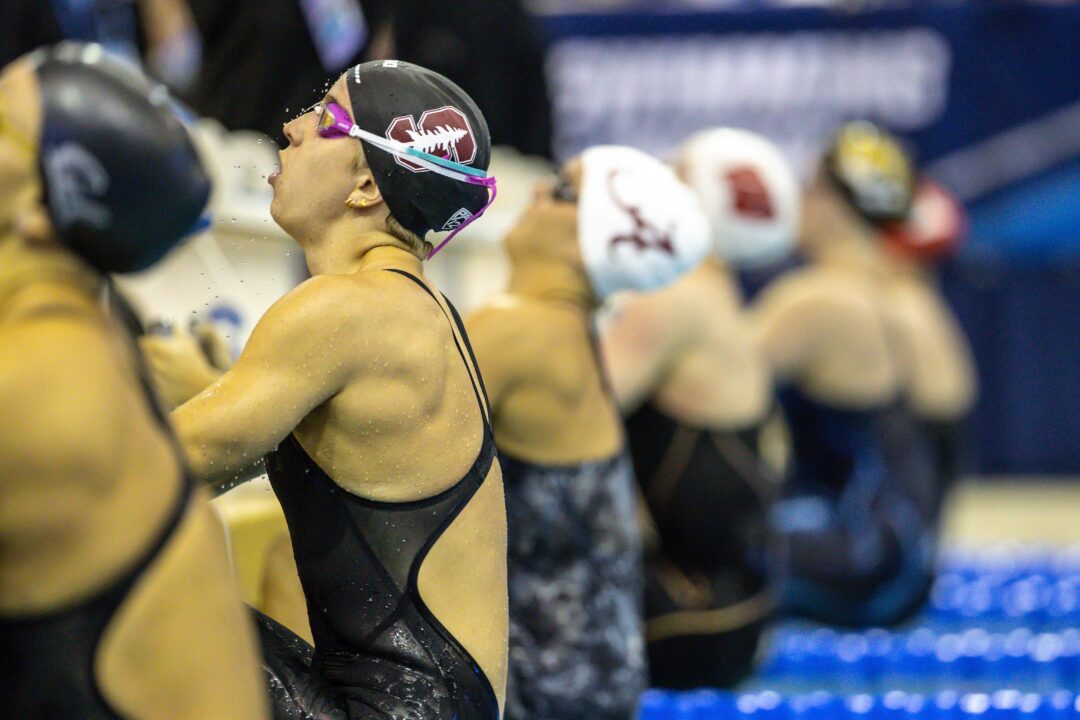 With about a week and a half until World Champ Trials, world record holder Regan Smith went a 2:07.43 in the long course 200 backstroke today. Archive photo via Jack Spitser/Spitser Photography

Fellow Stanford freshman Huske won the 100 butterfly in a time of 58.29. Huske’s best time is a 55.66 which she swam to win the event at last year’s Olympic Trials. Results do not show her splits. Her time today places her at #11 in the World this season as well as #4 in the USA so far this season.

16-year-old Devyn Caples (Unattached) dropped over four seconds in the 800 freestyle to win the event by over 34 seconds. Caples swam to a final time of 8:33.83.

She almost gets DQed for being underwater over 15m. My grandma is an official at the meet, they discussed and decide to not DQ her.

I think it was one of those races this close out to trials: test the speed going out, if you hurt coming back, back off, it’s time to rest. Wouldn’t put too much weight on the 31 high. No sense crushing it if you’re feeling tired this close to trials. She’ll be fine. Look, the UVA women had some rough swims recently (56.0 100 free from G. Walsh, for example).

Was in no way trying to indicate what kind of shape she is in just saying what it looked like from the deck. She was clearly very tired after the race based on how she was breathing and how she got out of the pool so I REALLY don’t think she held anything back. Her stroke also looked a lot more up and down in the last 20 meters.

Both of them seem to be off this week. Curzan was even faster than Smith in 200 back. But Smith can still punch three tickets to Budapest in 100-200 back and 200 fly.

Look. they both swam incredibly fast just a few weeks ago at NCAAs, and it was rumored they weren’t all-in taper-wise for it. There’s no way they suddenly just lost all speed never to recapture it. You’re reading WAY too much into this meet. The stakes were about zero for this meet.

This Worlds trials schedule is really a card from the bottom of the deck for the NCAA athletes. Just too much compressed into a couple months. The ones who can prevail through it are superstars.

We will see, but this meet greatly favors the high schoolers and the post grad pros.

I fully agree with you.
The number of NCAA swimmers able to shine at NCAAs, then able to qualify at trials and finally, the most important, able to perform at their best and bring home individual medals at worlds should be very limited. Only the best can do it.

8 weeks between trials and worlds should be enough for most of these swimmers to ramp up and go fast, if they make the team. Especially if their pre-NCAA training was geared for this. I think it’s roughest for people like Bobby Finke who had training disruptions like COVID and injuries.

You could be right. I still think like a guy who swam when there were still dinosaurs roaming. Used to be 4 months of abject misery, 2 weeks of rest, then 2 weeks of misery into 1 week of rest to hang on for a second taper. A third taper was the stuff of science fiction novels.

I know they do it different now, but also think that the format of conference, NCAA, selection meet then Worlds all packed into 4 micro cycles is a bridge too far for some. Who it impacts, we will find out soon. Just making the point that this schedule is brutally misweighted against the top tier NCAA swimmers is all.

The ncaa athletes who are capable of making the worlds team (Douglass, Walshes, Huske, etc) probably rested very little for their conf meet. So you have NCAAs and trials about 5 weeks apart. And then worlds almost 2 months later. Not easy – but I think it can be done.

I think that is a good guess. Watching ACCs my initial reactions were this meet is fast but the ringers are likely not peaked (or even rested much, just swimming tired suited). Emma Weyant’s 1,650 at conference sure seemed like the very definition of swimming through a meet. I also think with men’s NCAA meet a week later it makes for a tougher lift for the guys to make the team. I hope we don’t see this schedule again. It stinks to not space it apart more.

There are going to be some misfires from the NCAA crew.

Hope Torri can be 56+ in less than 2 weeks. This may be closer between 2-5 than we thought it would. I guess time will tell.

I hope she’s near world record form this summer, nearly broke it last summer. No reason she should stagnate to 56+ in less than a year. 56+ would be disappointing based on her performances last summer.

I hope she’s faster but she didn’t look 100% at ncaa like yes it’s her first year at Stanford and is adjusting to new training, so we will see. I wish her the best of luck.

I know that, but she did not win an event. I also think this summer will be faster than last to make the team..

She went all best times. It took some pretty historic performances to beat her.

It was actually 4 best times! That’s so incredibly hard to do for elite swimmers, but not good enough for Hswimmer

And I think she’s a better long course swimmer. Which is not the case for many college swimmers. Same for Regan Smith.

This is a bad take. She had a terrific ncaa season with big PRs all over. 1:51 IM would have been hugely memorable but for AWalsh going 1:50.0 Am Rec.