Sjöström ranks 5th at “European athlete of the year” award 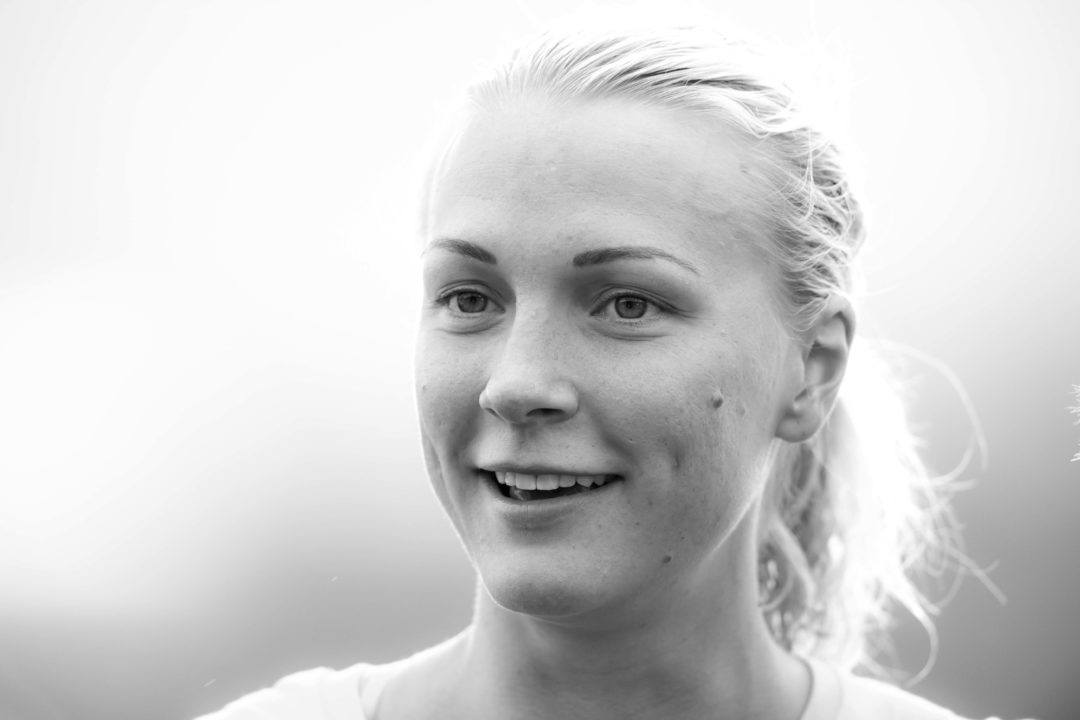 European sports journalists chose soccer player Cristino Ronaldo as the “2017 European athlete of the year”. The professionals made their... Current photo via Mike Lewis/Ola Vista Photography

European sports journalists chose soccer player Cristino Ronaldo as the “2017 European athlete of the year”. The professionals made their choice among the top male and female European athletes, whether they compete in a team or individual sport.

The “European athlete of the year” award exists since 1983 and swimmers were able to win the award three time: German Michael Groß in 1983, Alexander Popov (Russia) in 1996 and Netherland’s Pieter van den Hoogenband in 2000.

With the choice of the Norwegian cross-country skier Bjørn Dæhlie in 1998, only one winter athlete has been victorious so far.

Results of the 2017 “European athlete of the year” award

Well, Hosszu’s records are indeed among the largest, but I still wouldn’t put her next to Sjostrom. Take at least under consideration the number of events where Sarah Sjostrom demonstrates her dominance.

HAHHAALOLOL. Ok, now I KNOW this is Shane. Never heard anyone say that the IM and 200 back are “the most important events in swimming” except someone who has a financial interest in people believing that. Clearly the sprints are what the fans care most about

While Hosszu is a close second to Williams, Ledecky is 4-th and Sjostrom is 8-th on the AIPS list. If I were Shane, I would use the name Shane. He is one of the world’s top swimming coaches.

@ISTVAN:
You just prove that there are plenty of different views and criteria of who is better. Why do you think that yours one is the only one that is right and others are either demonstration of stupidity and incompetence or are a dirty politics? BTW, why are you not upset with the obvious bios of AIPS decision against the swimmer from “small poor” country? KH lost to a pregnant woman. Unbelievable. KH missed award at this poll as well.
Is there any list compiled by international organizations where she is on top (besides yours of course)? That is a conspiracy for sure. Everybody is against unlucky Hungarian. What a shame. No money, no glory. Bad year for… Read more »

Get real. We just had the European Swimming championships where Katinka Hosszu entered 6 events for 6 gold. Clearly a far superior performance to Sarah Sjöström’s.

Get real and Happy New Year

It’s easy for you, you’re closer than us 🙂

Sorry István, I’m a big fan and supporter of Katinka, but this year Sarah is the best. Really and far. This awards aren’t about a race but the whole year.

True, but it’s another question.

It is very significant and dirty when an international organization changes its rules to hurt one player against her competitors.

I’m not saying this is Shane (probably only the admins of this site know that), but I am saying that this sort of angry outlandish statement about Katinka and whether she gets enough respect sounds like something Shane would say. Maybe it’s just the Hungarian way?

It is not the Hungarian way and Shane isn’t Magyar. Otherwise where is he from?

You are angry at the facts that are 100% truthful. Katinka entered 6 events and won every one of them. In one of those events, Katinka beat Sjöström also. It seems that you are having a hard time when bested by a superior Hungarian athlete form a small, poor country.
Better make some more rule changes to push down Katinka:D

A few decades ago swimmers featured more prominently in these awards and there was more coverage in the major newspapers and television channels. If a world record was broken it would be covered in the main news media whereas today the sport is virtually non-existent outside of the Olympics. Part of it is due to modern day trends with limited concentration spans and the obsession with big personalities, controversy and drama. Swimming will always be virtually invisible next to football, tennis, motor sports etc. but it can do a better job of promoting itself. We have to ask ouselves as swimming fans if the FINA leadership is up to the task. Have a good look at the make-up of the… Read more »

Switzerland might not be the problem. UN Has 31 organizational headquarters there. (33 in the US).

This is interesting. Swimming is jjust not as worthy in a still very macho-world where soccer/football is still the realm of gods. Just look at articles, pages, papers etc the sheer amount of money advertising etc etc dedicared to soccer/football.. and yeah.. men playing ball… so for SarahS to break through that wall of old-school-mens-sports is quite a thing

Once Again A MAN’S WORLD 🙁

#5 looks bad but this should be a huge honor for her. The people ahead of her are big celebrities and will always rank high when they have good years. She is the #1 female and #1 out of the athlete’s who aren’t huge celebrities. She beat Chris Froome who has won multiple tour de frances. Just cracking the top 10 is a big deal.

Maybe indeed the fifth place is the right one. There is no simple rule how to compare achievements in different sports. Well, if a spokesperson won several world titles then it may mean a weak competition. If the world record got broken, then, well, we saw many new great records this season. But Sjostrom’s records were fantastic in the field of very well developed competition. The significance of her records this season can be measured probably by estimated time they will stand unbroken. But so is Federer’s record. It may never got broken.

Some sports are so promoted in that kind of awards/rankings each year. It’s a joke. Like tennis, formula one or football (soccer in USA).
Bolt, Federer or Ronaldo are journalists’ darlings.
MP never won the award from L’Equipe here in France. Dressel not on the podium of Eurosport France this year. A joke.

and why shouldn’t Bolt, Federer, and Ronaldo be “journalists’ darlings”? without a doubt some of the best athletes of all time…

And Sjöström isn’t the same caliber because she’s a she and a swimmer at that? Dumb argument. Plus two on the list are suspected dopers. And one drives a car. Not an athlete.

She is definitely not the caliber of Bolt (greatest sprinter ever), Federer (arguably greatest tennis player ever), or Ronaldo (up there for soccer all time greats). It has nothing to do with her being a female, please… OR a swimmer – I would include Phelps or Spitz up there with those guys for all time sporting greats.

All that being said, she is by far the youngest of these athletes and what she does over the next couple years could turn her into a legend.

And please don’t call me dumb :/

Anybody who takes part in any kind of technical sports is an athlete.

Well to be fair, Ronaldo has an incredible year, Federer winning Aussie Wimbledon at 36 is insane (he should be number 1 imo). Nadal completing la decima….

I’m pretty sure come 2020, Caeleb Dressel will win every male athlete of the year award out there.

I agree! Swimming is a sport that is so underestimated. It’s really a shame because the sport is so important! I hope this will change in the future… because ex, Sarah Sjöström should definitely have won that prize! Her individual performances is outstanding!

Swimming as a sport is not important in the grand scheme of things. Sports that bring in money are more important.
I mean phelps is worth like 55 million dollars and that,s because he,s the GOAT. The second wealthiest swimmer is Mark spitz at like 20 million.
Compare phelps to the GOAT of tennis, roger federer whose net worth is at 400 million dollars. The gap is massive. However to be fair the gap between federer and the second richest tennis player in big.
Federer has won 100 million dollars in prize money from actually playing tennis. The remaining 300 million is from endorsements.
Phelps never won much from actual swimming. Almost all his money comes… Read more »

Sports that bring in more money are more important? That’s about as silly an argument as they come.

SWIMMING IS IMPORTANT. It’s the most important sport we have, kids and adults must know how to take strokes and need to be able to swim 200m without any bigger problems. So think again and next time you maybe could consider swimming as a important sport. It’s not just about the money. It’s about life and more swimming lessons could help saving more life’s. Football players does not help change the world, instead they run after a stupid ball. SWIMMING IS IMPORTANT.

There is a difference between being important as a life survival skill and important as a sport. I was replying to the way you framed your sentence. You were talking about swimmers not getting recognised in their sport and swimming being an important SPORT not ACTIVITY. It,s because of the niche nature of swimming. Swimming as an activity is important off course.

It,s like “Olympic shooting”. Olympic Shooting is an Olympic sport. Shooting is an important activity that can save lives. But as a sport, it,s so niche that it,s not important in the grand scheme of sport.

In Sweden, you must know how to swim. Therefor the school gives free lessons in swimming. They also encourage people to start with the sport so less people drown. But maybe your country, wich sounds like it sucks, don’t get that swimming is important nether if it’s a sport or a life survival skill.

Yes my country sucks. Too bad tho.

I agree with Bobo’s point of view.
Many European journalists consider more the “mediacity” of athletes than their sporting exploits.
Even if Phelps had won 12 races, in every way, in one Olympics he would have been seen as “boring” (and so underrated) by too many Italian (and European) journalists.
The much more smiling Dressel has more chances to be agreeable to these “sports journalists”.

I agree, there is a huge bias here. Many hugely talented and utterly dominant athletes are ignored.

Bianca Walkden (Taekwondo) won the World Champs and every grand Prix event she was eligible for in 2017 – Something unheard of in the sport. To win all 6 major titles of the year in such a technical sport is unbelievable – Yet she is ignored.

I understand bias in public votes – But experts should be able to look beyond those things and find sporting achievement in disciplines beyond football or tennis.