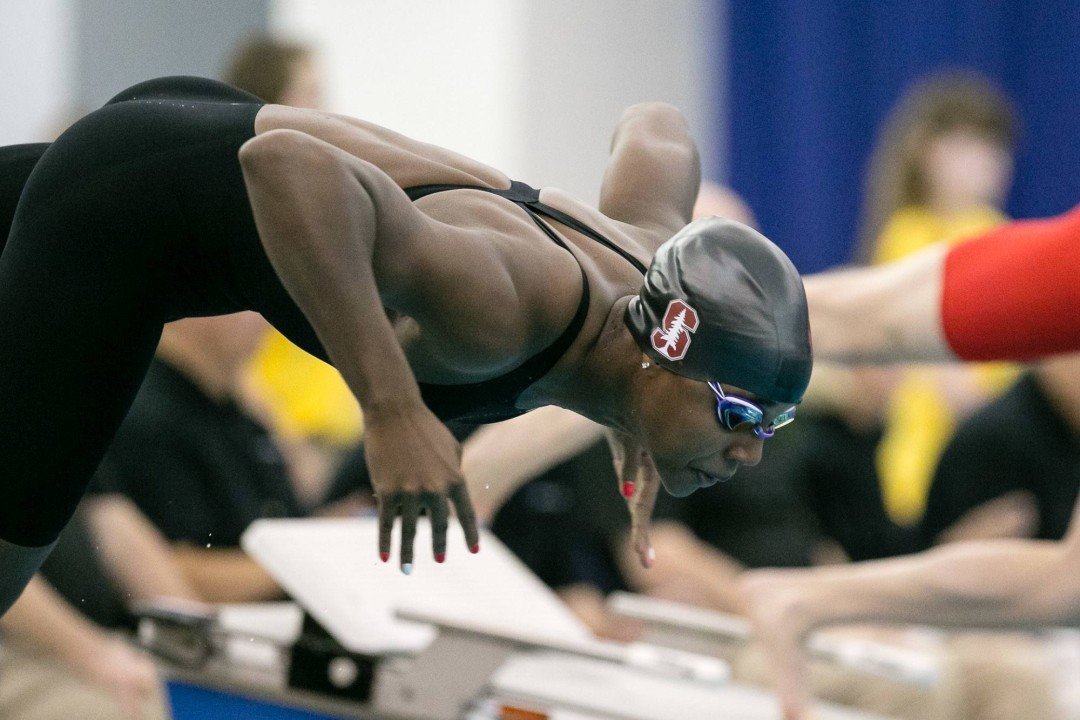 Manuel swam a 46.09, which broke the record of 46.29 done by Abbey Weitzeil at the 2014 Winter Junior National Championships in December.

This is the second time that Manuel has held the American and Natiional Age Group Records (she held them from March through December of last year), but her first time to be crowned as the NCAA and U.S. Open (all-time fastest) record holder.

Manuel opened up in 22.31, ahead of even Wisconsin’s fast-starting Ivy Martin (22.48), and her back-half that has become such a weapon was the fastest in the field by almost half-a-second. She wound up a second ahead of teammate Lia Neal, the runner-up (47.13).

Weitzeil is a high school senior, so her time was also the old National Age Group Record. The old NCAA Record was a 46.61 done by Arianna Vanderpool-Wallace at the SEC Championships in 2012.

Isn’t it redundant to say American record and age-group record? It’s like saying she broke the NCAA record AND her school record. lol

Bobo, thanks for this–simply listing the swims and times really does demonstrate how tough a lineup these athletes face, and yes, just how amazing a performance like Manuel’s is. Worrel’s would be interesting too given she closed with a 2fly win and a relay. (I’d do it but I’m on my iPad).

For the handful of people that contend ncaa swimming is a distraction for those with international LCM glory potential, I’d say that the ability to manage an agenda like those at conferences and NCs is a huge advantage regardless of how long the pool is.

And here’s the same about Missy Franklin.
http://swimswam.com/2015-womens-ncaas-day-3-pac-12-roundup-simone-manuel-earns-twin-american-records/

I got verklempt on this one. Beautiful to watch. Congrats to Natalie and Leah too. Wow.

Would love to see them race each other!

Zanna, be patient. Pac-12 championships and NCAAs next year.

And Liquid, Abbey Weitzeil is already in long course mode.
She swims this weekend at a meet in Mission Viejo.
A lot of foreign swimmers there, especially the United Nations from the Trojan Swim Club. 🙂
And among them, Efimova makes her return after her doping suspension. And that’s a nightmare, she looks stronger than ever. Already 1.05.89 in the 100 breast final! I’m afraid about the world championships.
Morozov is there too.
Live results here
http://www.socalswim.org/live-results/2015MarchSeniorMVN

Isn’t she deferring a year to focus on Olympic Trials? So she will only compete at Pac-12 and NCAA’s in 2017. Correct me if am wrong!

You’re right. I totally forgot that news from just a few days ago! 😳
So you’ll see them swim against each other at the next US olympic trials.