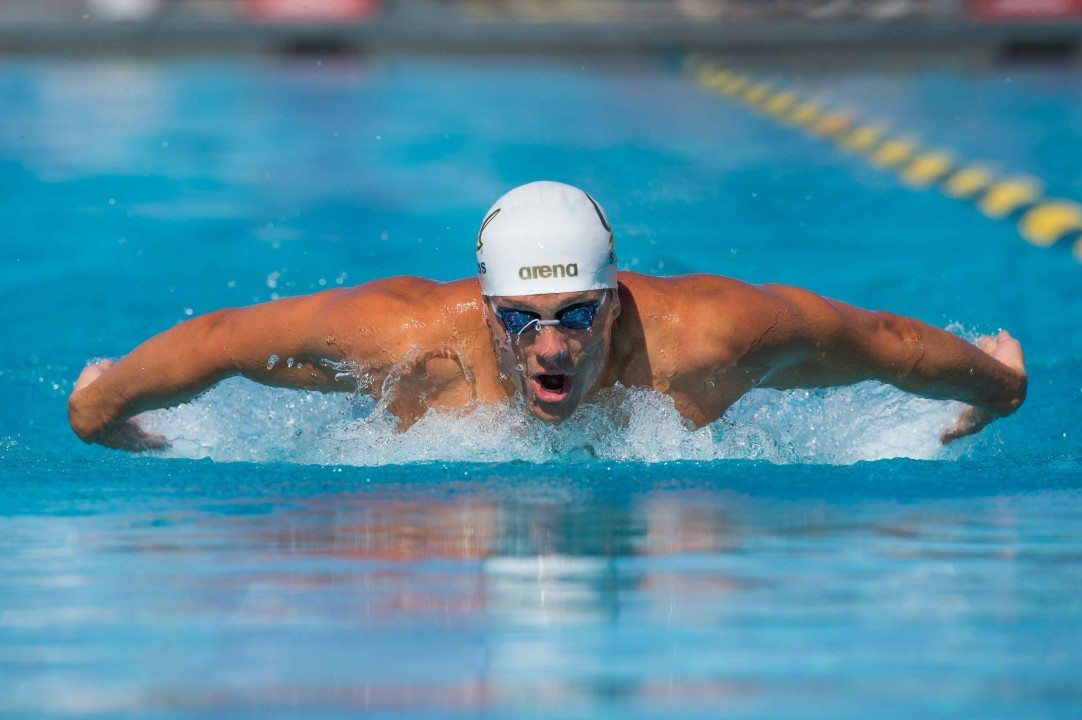 Shields went 52.15 to win the men’s race. That’s his best time of 2016, though his 51.41 from last December still ranks him #6 worldwide for the season (running from last September through this summer).

Shields competes for California Aquatics and Stewart for the Trojan Swim Club, and it was those two college-based programs that dominated night 4.

Trojan’s Dylan Carter, who sat out the NCAA season with USC to focus on an Olympic bid for Trinidad & Tobago, won the men’s 100 back in 56.30. Meanwhile USC freshman Kirsten Vose won the women’s 100 breast in 1:10.31, just a half-second off her lifetime-best. Her classmate Riley Scott won the 200 IM in 2:17.03, topping Cal’s Celina Li (2:17.19). That time for Scott was a new Olympic Trials cut, chopping 2.5 seconds off her previous lifetime-best.

The men’s race went to Salvadorean Olympian Rafa Alfaro, who swam in college for BYU, but now competes for Trojan. He went 2:05.61.

In addition to Scott’s 200 IM, a couple of new U.S. Olympic Trials cuts went down on night 4:

Not to be overlooked is Justin Lynch’s stellar 52.43, coming in just behind Shields. So, the US top 8 for this current season looks like this, I believe:

That sure will be an interesting event at trials. So many events will be exciting, but this one is higher up there on the list for me. Durden has one heck of a training group there, with Shields, Lynch, and Stubblefield all swimming so very well. Great to see Lynch swimming like this….… Read more »

Katie McLaughlin’s 200 free is very promising. Her last 50 split was faster than her 2nd and 3rd 50 which shows she is in good shape. Her butterfly races worry me a bit, but hopefully that will come back to her. Her general fitness looks good.

Good race by Amy Bilquist in the 100 back. I would not understand if she didn’t swim under the minute at olympic trials. However the qualification will be tough as the second spot will be probably between 59 low and 59 mid. But we never know. That event is so open right now in USA.

I fear for Kendyl Stewart that she finishes 3rd at trials in the 100 fly. The worst place. Worrell and Vollmer look miles ahead of the others.
Young Eva Merrell will try to grab a top 5 in Omaha.