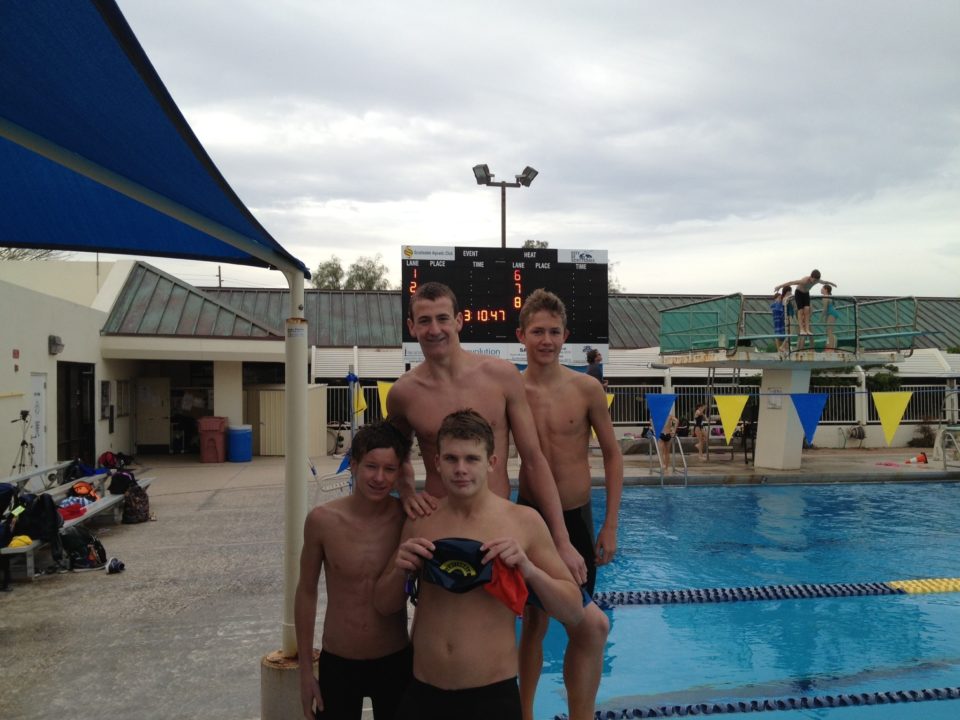 This morning, we reported that 27 National Age Group Records had been broken already in March. We tempted fate. That was only true for a few more hours, as the Scottsdale Aquatic Club 13-14 boys broke two NAG Relay Records in a time trial at the local Cactus and Aquatic Fitness Center (as always, pending officialization by USA Swimming that all protocols were followed). This meet was a chance to overlap those swimmers who had qualified for Sectionals with those who’s focus is age group LSC Championship meets.

First, they swam a 1:25.63 in the 200 free relay, which knocked more than a second-and-a-half off of the 1:27.35 set by the Black Hawk Area Swim Team in Iowa. This Scottsdale relay is very different from their predecessors. The  Black Hawk Area Swim Team didn’t have any one swimmer who individually ranks in the top 80 13-14’s of all-time, with their stars being Jordan Wessels and Nick Cordes.

This Scottsdale team, on the other hand, boasts two of the five fastest 13-14’s in history: the Age Group Record holder Hoffer, and Jack Blake whose 20.85 ranks him 5th all-time.

Brian Hoffer is Ryan’s uncle, Scott is his Dad. Congrats to all 4 on fantastic swims!

I am lucky enough to have been at the time trial and experienced all the action. It was probly one of the most amazing things I have ever seen. We had half the team there to cheer them on and the support from everyone was so awesome! These boys work their butts off everyday and are going to be great swimmers. The best part about these boys is that they are so humble and down to earth. They never brag. I am looking forward to some great things from this team in the future