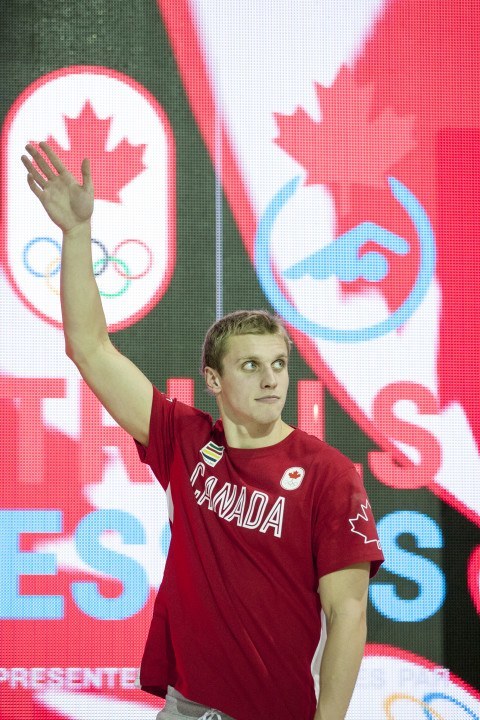 American-based, Canadian-stamped swimmer Santo Condorelli has broken the Canadian National Record in the 100 fly – an event he won’t even... Archive photo via Chris Tanouye/www.christanouye.com

American-based, Canadian-stamped swimmer Santo Condorelli has broken the Canadian National Record in the 100 fly – an event he won’t even swim individually at this summer’s Olympic Games.

Racing at the 2016 Arena Pro Swim Series meet in Indianapolis on this busy weekend, Condorelli swam a 51.98 to win the event at his part of the three-legged American lineup, which broke the country’s all-time senior record.

The previous National Record in the event was a 52.28 done by Joe Bartoch of the London Aquatic Club at the 2008 Canadian Olympic Trials in Montreal. This is Condorelli’s second long course National Record, adding to the 50 fly (23.30).

Condorelli won’t get the opportunity to swim this event individually at the 2016 Olympics, however, after he was disqualified in prelims of Canada’s Olympic Trials. In fact, Canada won’t send anyone to swim the 100 fly on the men’s side.

Condorelli’s previous legal best was a 52.41 done at December’s USA Swimming Winter National Championships. The American-Canadian dual citizen, who competed at the 2012 U.S. Olympic Trials before opting to represent the maple leaf in Rio, is ascribed to swim the 50 free, 100 free, and 400 free relay at the Olympic Games. In Indianapolis, the 50 free is scheduled for Saturday and the 100 is scheduled for Sunday, and the 100 fly is an indicator that a last big swim might be available in those races as well with nothing else to focus on between here and August.