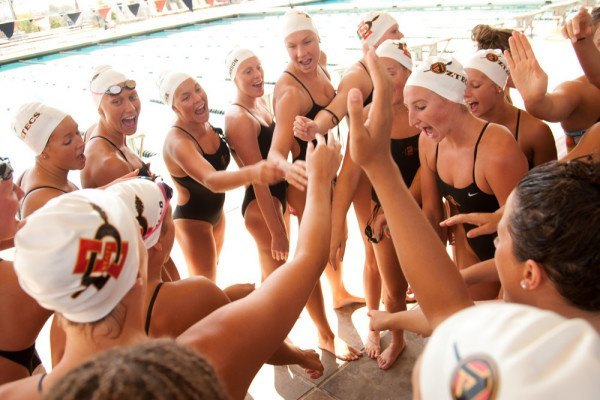 Klara’s sister Alma Thormalm led off the Aztecs 400 free relay with a field-leading 48.57, and was followed by Klara Thormalm in 49.14, putting San Diego State in the lead by 3.5 seconds at the halfway mark. SDSU wa brought home by Mia Ryan (49.61), and McKenna Meyer (49.92), touching the wall in a final time of 3:17.24, breaking the San Diego State school record by 2 seconds. Alma Thormalm swam slightly faster than her lead-off leg on the relay to win the individual 100 free. Thormalm swam a 48.55 to win the event, clocking a personal best and the 4th fastest time in conference history.

Fresno State freshman Athena Clayson, who was named Freshman of the Meet, won the 200 backstroke on Day 4 with a time of 1:55.58, setting a new personal best. Clayson beat out Wyoming’s Katelyn Blattner on the final 50, splitting 28.39 to Blattner’s 29.16 (1:56.13 final time for Blattner). Fresno started out the session hot, as they also took the first event of finals, the 1650 free. Junior Darina Khisiamova swam a 16:43.41 to take take gold.

Wyoming’s Melissa Mirafuentes, who went on to win Diver of the Meet, took women’s Platform diving in a 1-2 punch for Wyoming. Mirafuentes tallied up a final score of 324.10, easily taking the top spot, with teammate Karla Contreras taking 2nd with a score of 302.80.

Great Job ladies! Everyone came to swim fast. I was shocked to see Boise drop to 7th this year. This conference is getting fast!

Boise State has not been the same since Kristin Hill.