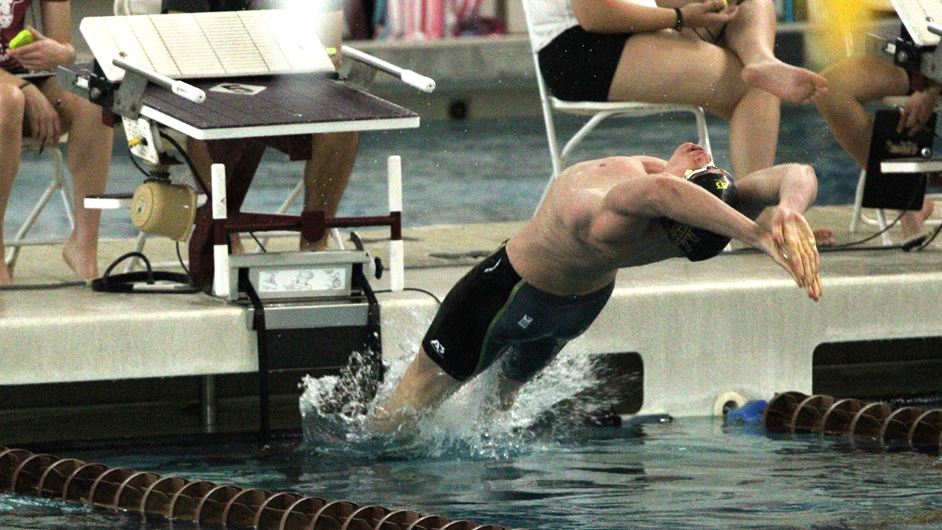 Leading a 1-2-3-4 sweep for Colorado Mesa in the event, Ben Sampson clocked 46.46 in the men's 100 back to extend his national performance list lead. Current photo via Chris Day

Simpson has spent the last two seasons as the head coach of the men’s and women’s swim programs at Columbia College (S.C.).

Hammaker enjoyed a record-breaking career at Lycoming College from 2001-2018, including winning MAC Women’s Coach of the Year honors in 2009-10.

Nash Baker graduated from Fossil Ridge High School and 2022, and will join the Golden Eagles in time for the 2022-2023 season.

GRAND JUNCTION, Colo.— Colorado Mesa University redshirt freshman Ben Sampson became the sixth fastest 100-yard backstroker in NCAA Division II history as he smashed the meet and his own pool and Maverick records to lead the Maverick men’s swimming & diving team to another victory sweep on Friday, the third of four days at the A3 Performance Invitational.

Leading a 1-2-3-4 sweep in that event, Sampson laid down an impressive time of 46.46 seconds to extend his national performance list lead.  The Arvada, Colorado native is now the fastest American NCAA Division II swimmer of all-time and secured a spot in the 2022 NCAA Division II National Championships with the time, which converts to 46.36 seconds with the available altitude-adjustment, a full-half second below the automatic qualifying standard.

Sampson, then came back less than hour later to turn in another fast time of 46.58 seconds, which is also amongst the top-10 fastest in Division II history, as the opening leg on the Mavs’ school and meet-record setting 400 medley relay team, which touched in 3:13.16.

Mahmoud Elgayar, Dejan Urbanek and Matheus Laperriere teamed with Sampson on that squad, which extended their national lead to 4.56 seconds with an altitude-adjusted mark of 3:12.76.  Elgayar had been part of the 2019 NCAA Division II Championship qualifying squad which had the former Maverick record of 3:14.11.  He was also on the 2019 meet record-setting squad that had finished in 3:16.19.

As a team, the Maverick men won all seven events contested on the busiest day of the met as they posted nine additional NCAA Division II championship provisional qualifying times in the swimming events while Tanner Belliston set yet another diving qualification mark in the 1-meter diving event.

After another strong preliminary session that set up the evening heroics, Urbanek got things rolling for the Mavs as he moved to No. 3 in Maverick history and to first in Division II this season with a winning time of 48.19 seconds in the opening event of the night.  Zach Hartman (49.06) also set a NCAA “B” cut time to finish third and take over the No. 7 position in program history.

Simmons then won swimming’s most grueling discipline with a time of 4:02.37, less than a second off his personal-best to rank as high as fourth in Division II with the 5-second altitude adjustment that lowers his time to 3:57.37.

Kiszczak then moved into a tie with Sam Bryant for the No. 3 spot in CMU’s 200 free history as he won the event to lead a 1-3-4 Maverick finish in 1:38.24.  Logan Ellis also set a NCAA provisional time of 1:41.29 to place third after Hartman had turned in a mark of 1:41.24 in the preliminaries before finishing fourth in the final.

Belliston then won the diving competition with 471.95 points after scoring 486.80 during the afternoon preliminaries.  Both marks were well above the Division II pre-championship meet qualifying standard of 440 points.  Dylan Apicello finished second with 381.80 points in the finals after scoring 386.90 in the afternoon.

The Mavericks then capped the night with the record-setting relay win.  CMU’s “B” team of Scoggin, Barrett, Hartman and Austin also took second overall in 3:18.53.

Six more scoring events will be contested on Saturday, the final day of the meet as the Mavs will look to lock up their fifth straight and tenth overall team victory in the 11th edition of it.