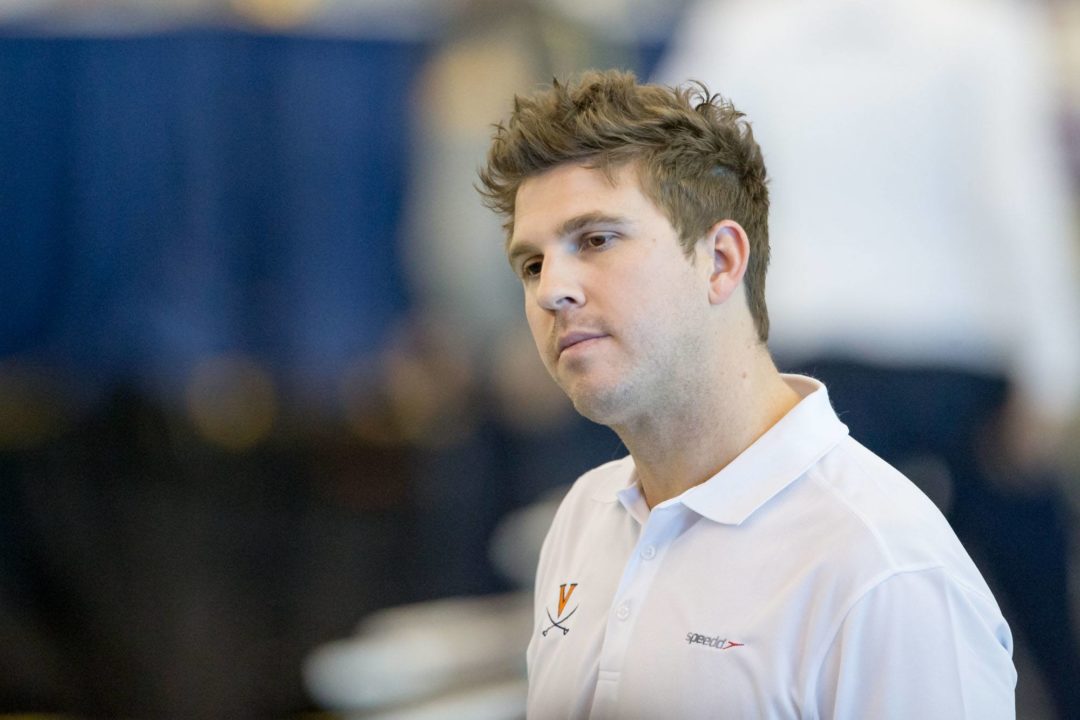 Sam Busch, like his brother Augie, will have a new head coaching job next season. Archive photo via Tim Binning/TheSwimPictures.com

Former Virginia assistant Sam Busch won’t be joining his brother Augie in Arizona afterall. Sam, the younger of the two, has been announced as the new head swimming and diving coach at TCU. He takes over for Richard Sybesma, who retired after 38 years at the helm of the program.

Sam Busch has worked at many of the country’s top programs in his decade-long coaching career. He started his career coaching at Arizona from 2007-2009, straddling his 2008 graduation from there, working under his father Frank Busch – the outgoing USA Swimming National Team Director. He then spent 2 seasons as an assistant at West Virginia (who at the time were in the Big East (they’re now in the Big 12 with TCU). His next stop was at Auburn from 2011-2013 before he joined his brother as an assistant at Virginia.

He also spent 5 seasons as an assistant at Tucson Ford Aquatics, who won a USA Swimming team title in 2010, and 3 years as the head coach of the Salpointe Catholic High School in Tucson.

“When the opportunity to usher in a new era of TCU swimming and diving was offered to me, I accepted the honor with great enthusiasm and heartfelt gratitude,” Busch said. “To work with one of the country’s great athletic directors in Chris Del Conte is beyond fortunate.

“Thank you to Chris and senior associate athletics directors Jack Hesselbrock, Gretchen Bouton and Mike Sinquefield for their attention and consideration during this process. I am so humbled to become a part of the tremendous athletics success at TCU and am already at work trying to make sure I am worthy of the confidence that has been placed in me. Go Frogs!”

TCU competes in the Big 12 – a conference dominated by the two-time defending NCAA men’s team champions Texas. Both their men’s and women’s teams finished last at last year’s Big 12 Championship meet – the men 3rd out of 3 teams and the women 5th out of 5 teams.

TCU’s current Director of Athletics, Chris Del Conte, was the senior associate athletics director for external operations and sports programs at Arizona from 2000-2006, overlapping with Frank Busch’s tenure there.

“We are very excited to welcome Sam to the TCU family and Fort Worth,” Del Conte said. “TCU is a destination in collegiate athletics. We had a lot of interest in this position. The search process confirmed to us how special and desired it is to be at TCU and how we’re viewed across the country.

“Sam is a perfect fit for us. He comes from a tradition-rich Virginia program in which he played a major role in their recruiting and team success. He is also part of a great family coaching tree. We have no doubt Sam will have the Horned Frogs Factor in leading our swimming and diving programs.”

Will you adopt me?

I’ve never heard anyone say anything bad about Sam. Or are you just talking about what people say about Augie then you are making it about the rest of the family?

yes, that’s what i’m doing in part. but the comment above by “the truth” shows my point perfectly. he’s implying sam got a job he’s not qualified for because of his dad. to me that would be offensive.

Well odds are they (Sam and Auggie) wouldn’t have been coaches at U of A if their dad wasn’t the head coach. So it is basically true right? They weren’t qualified for that job, which led to all the others.

Sammy has done great things at UVA!! Exciting hire for TCU.
Just a few examples of what Sammy has done with his sprint group in the past at Virginia.

just to name a few! Best to Sam & staff

why would anyone downvote this. swimswam commentors have gone downhill these past few months. no class.

any word on Chitwood? is he also looking for a head coaching job?

He should be. UofA will be hard pressed to rebound in the immediate future with recent losses and reluctant prospective recruits.

Could well be the next UVA coach. His schedule following Auggie’s departure had him with the US national team as a coach (and out of Charlottesville) for most of the days since, making it difficult to interview him. But he coached the distance swimmers (4 medals at Worlds), including Leah Smith, and it would not surprise me at all if once he is back in the US he gets an interview and quick offer.

Good luck to Sam! Met him when my daughter visited UVA and liked him, Augur not so much. We also visited TCU but facility there does not compare to UVA’s. Here’s hoping TCU funds a new pool, like SMU’s . My daughter was not interested in training or competing in a 6 lane rec pool.

Any rumors on the candidates for UVA?

Lots of rumors, but they need to hire an entire staff. This recruiting season is about shot. Will be fall of 2019 before they get any new good talent.

Also wondering about the current recruiting class….not much stability in the Virginia coaching staff recently. Todd Desorbo seems like a good candidate but that would shake up the NC State staff quite a bit……

UVA offers so much for any fortunate student/swimmer both in and put of the pool. Our child is a rising senior and wouldn’t change anything about her 3 years on Grounds. Except for the loss to NCSU last season 🙂 UVA will be more than fine. Rest assured.

Know very well the Virginia campus and swimming program…..even with a pretty view it is never good to have that much turnover in coaches. UNC has a pretty view as well…….and look where they are at……

Sam Busch is a great coach and a great man. Expect to see improvement from TCU, especially based on his successes with the sprinters at Auburn and Virginia. Wish nothing but the best for that man!