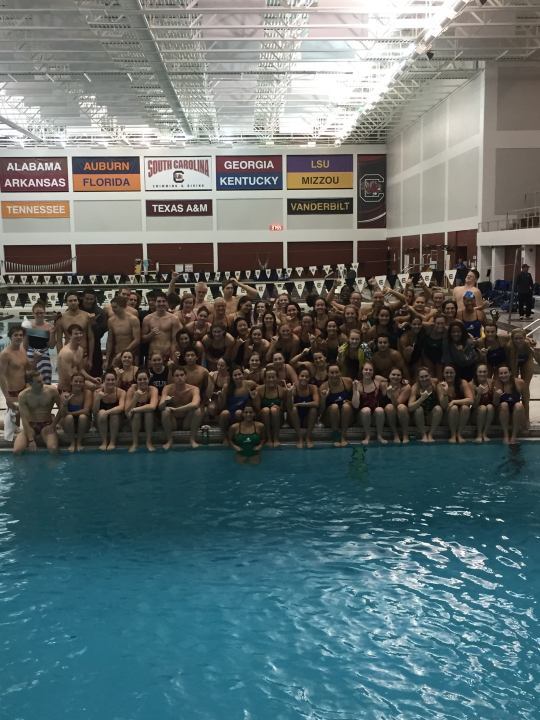 After heated competition on Friday, the South Carolina and Florida Gulf Coast women got together for a combined team practice on Saturday morning in Columbia. Current photo via Amanda Smith

For the second week in a row, the Eagles of FGCU won both the 200 medley relay and the 200 free relay.  In the 200 medley relay, the FGCU ‘A’ squad of Kira Toussaint, Evita Leter, Emma Svennson, and Becky Derogatis took the win in 1:41.99, with the Gamecocks coming in second in 1:45.29.  FGCU then closed the meet with Svennson, Derogatis, Sarah Hamilton, and Kristen Julien won the 200 free in 1:34.33.

On the swimming events alone, the Gamecocks were ahead of the Eagles 134 – 125. The diving was the nail in the coffin that extended the South Carolina margin.

Head diving coach Todd Sherritt had this to say about his divers: “I’m overwhelmingly happy with our performance today. We’ve been working on some very specific things and everyone on the team did almost 100 percent of their objectives.”

Eagles head coach Neal Studd commented: “The girls fought hard tonight……The 11 hour bus trip to Columbia was tough but they had a great attitude and competed with a big SEC program very well.”

With the win, the Gamecocks move to 3-1 on the season, and next host East Carolina and College of Charleston on November 8.  Florida Gulf Coast falls to 2-1, and travels to Atlanta on November 20-22 for the Georgia Tech Invite.