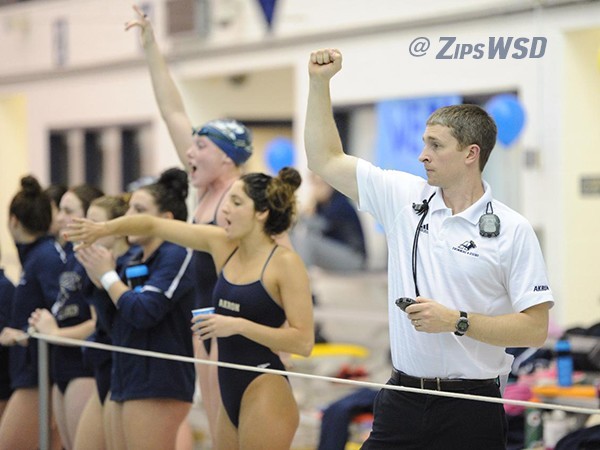 After falling to Eastern Michigan on Friday evening, Akron rebounded on Saturday to defeat the host Cardinals of Ball State 151.5 – 148.5.

The defending Mid-American Conference champs from Akron opened the meet with a win in the 200 medley relay. Ashley Niznik, Amanda Lawson, Erin Seiler, and Hanna Raspopovich teamed up to claim the first victory of the meet with a 1:47.62 effort.  Ball State was a close second with Courtney Mudd, Amanda Kedzierski, Jenna Zitkus, and Jordan Vanwinkle finishing in 1:48.33.

Maddie Zirzow of Ball State took the wins in both diving events.  Her score of 269.85 in the 1-meter event put her ahead of second place Alice Hottensmith from Akron who scored 266.63.  In the 3-meter event, Zirzow scored 265.20 for the win – this time ahead of Akron foe Rachel Aepelbacher who tallied 258.53 for second.

Ball State closed the evening with a win in the 400 free relay.  The ‘A’ team of Vanwinkle, Jessica Extine, Elaine Pitsas, and Magley touched in 3:32.99 ahead of the second place Akron ‘A’ team of Niznik, Taylor Hart, Kaulius, and O’Brien who posted a 3:37.24.

The reigning MAC champs Akron, now 1-2,  have a few weeks off from competition before they head to Cleveland State on November 21-23 for the Magnus Cup Invitational.  Ball State next head to Eastern Illinois for a co-ed meet on November 7.