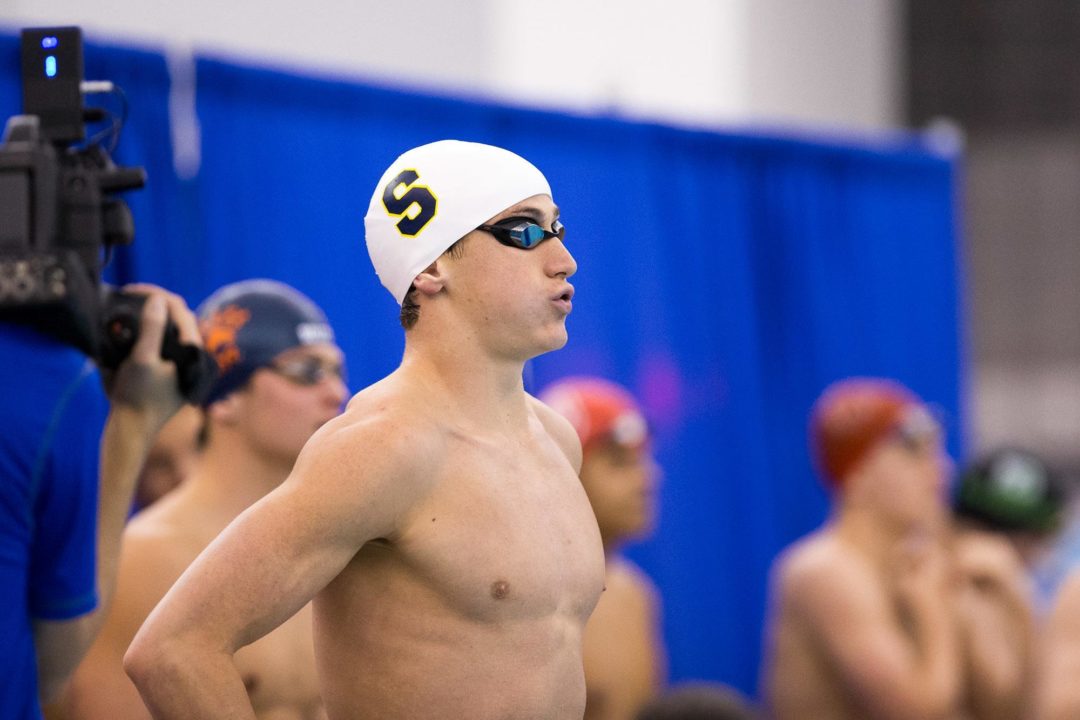 Ryan Hoffer took down another 15-16 sprint record, this time in the 100 yard freestyle. Current photo via Tim Binning/TheSwimPictures.com

After re-breaking the 15-16 National Age Group record in the 50 free earlier this week, Ryan Hoffer of Scottsdale Aquatic Club was back at it again tonight, this time in the 100 freestyle.  Hoffer cut over a half second off his previous best time to clock a 43.13 in the 100 freestyle, bettering the previous standard of 43.29, set by event champion Caeleb Dressel at this meet last year.

The first time he set the 15-16 NAG record in the 50 this fall at the Arizona High School Swimming and Diving Championships, Hoffer was just 43.87 in the 100 freestyle.  While his 50 free time was right around the same at this meet, Hoffer was able to find another gear here.  Here’s a quick split comparison:

The most eye-catching things about this swim:

Very impressive.
Can he translate that now in long course?
We’ll see next summer.
But his progression is amazing.
He was in 44.81 last March.
Now in 43.13!

I’m sure he will be good LCM, but I doubt as good as he’s been in SCY. He’s a stud UW, and I highly doubt that will translate into LCM swimming. Unfortunately in LCM swimming, you have to swim a lot.

That’s why the call it swimming….. to swim it!

Dressel is a stud underwater and still has just as amazing LCM times. It depends on if his swimming is as good as his underwaters.

Dressel is a stud UW but Hoffer stays UW longer than Dressel does. I’m not saying that Hoffer is better UW, although he might be. Dressel has shown he can swim LCM just as well. Hoffer has not, yet. There have been a lot of SCY studs that just weren’t great swimmers–Staab is probably best most recent example. He was a 3 time individual NCAA champion, and couldn’t come close to matching it in LCM. I hope Hoffer becomes a great LCM swimmer though. 43.1 as a 15 year old is amazing.

He will transfer to LCM because he will be getting the right training. Let the doubters be doubter and haters be haters. Let him swim his brains out and have fun doing it!

His reaction to his 100 Free was priceless. It was so genuine… He is clearly having a ton of fun racing this weekend. It was fun to see.