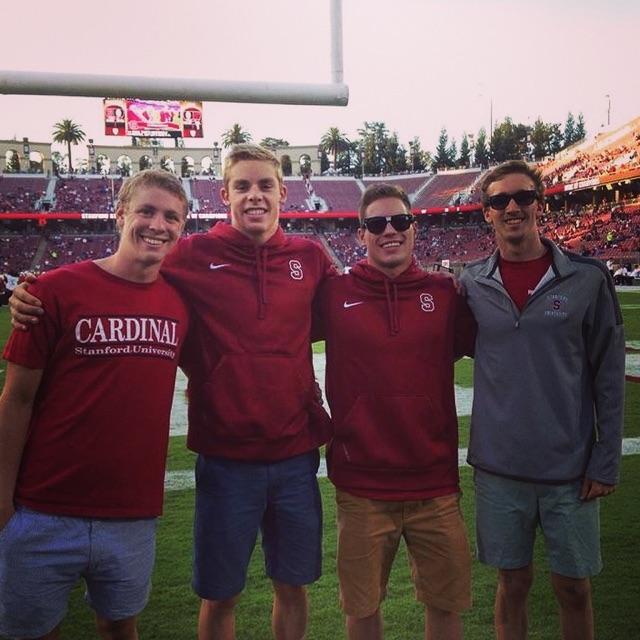 Ryan Dudzinski from the Upper St. Clair Swim Club has verbally committed to the Stanford men, giving them one more backstroker...

Ryan Dudzinski from the Upper St. Clair Swim Club has verbally committed to the Stanford men, giving them one more backstroker that will fill the huge hole left next season by David Nolan’s graduation.

In yards, Dudzinski’s best times are:

His time in the 100 back is already good enough to qualify for NCAA’s, and just-shy of what it took last year to score at NCAA’s.

Dudzinski’s plans should include a ticket to NCAA’s as a freshman in 2016, based on his impressive improvement. In the 100 back, he went from a respectable 49.69 to an all-time 46.88 in yards. Further, after not putting much focus on the 200 backstroke as a sophomore in high school, he dropped over five seconds as a junior alone, going from 1:51.35 to 1:45.94.

He might also compete in the sprint free relays during his career, as that has been a big weakness for Stanford in the last couple of seasons.

Stanford’s class hasn’t been huge in number, but all three swimmers they’ve gotten public verbals from so far have been immediate-impacts, and the Cardinal are building a formidable medley relay of the future.

While it won’t be clear-sailing onto Stanford’s medley relays in his first season (junior Ryan Arata had a good year last year, going 47.1 in the 100 back), Dudzinski seems destined to take over that spot eventually. Matt Anderson is a 54-mid 100 breaststroker, and the #17 recruit in the class of 2015 Brad Zdroik is a 44-second 100 freestyler.

Dudzinski also swims for Upper Saint Clair High School in Pittsburgh. His older brother, Kyle, is a senior at Virginia and the UVA Record holder in the 100 yard backstroke.

Ryan has gone 20.56 50 free unshaved and untapered in the 5 lane high school pool where he trains. He also split a 44 flat 100 free anchoring the state championship 400 free relay. Could be a big factor with those times.

Good pick up by the Cardinal. In short, they now have 3 of 4 for a medley relay…and quite a good one at that. Will Valente be the butterflier they add to the mix, making a full medley complement? Dudzinski is a significant prospect to help ease the departure of Nolan. And, while he’s got big shoes to fill in that regard, his 46 high is a great starting point. Looks like he and Michael Thomas at Cal will have 4 more years of racing one another, as they did when they put up their best times….

Congrats to Ryan and the Dudzinski family! If he’s half the person his older brother Kyle is, then the Cardinal has landed not only a great swimmer but a tremendous individual.

Thank you for the kind words.