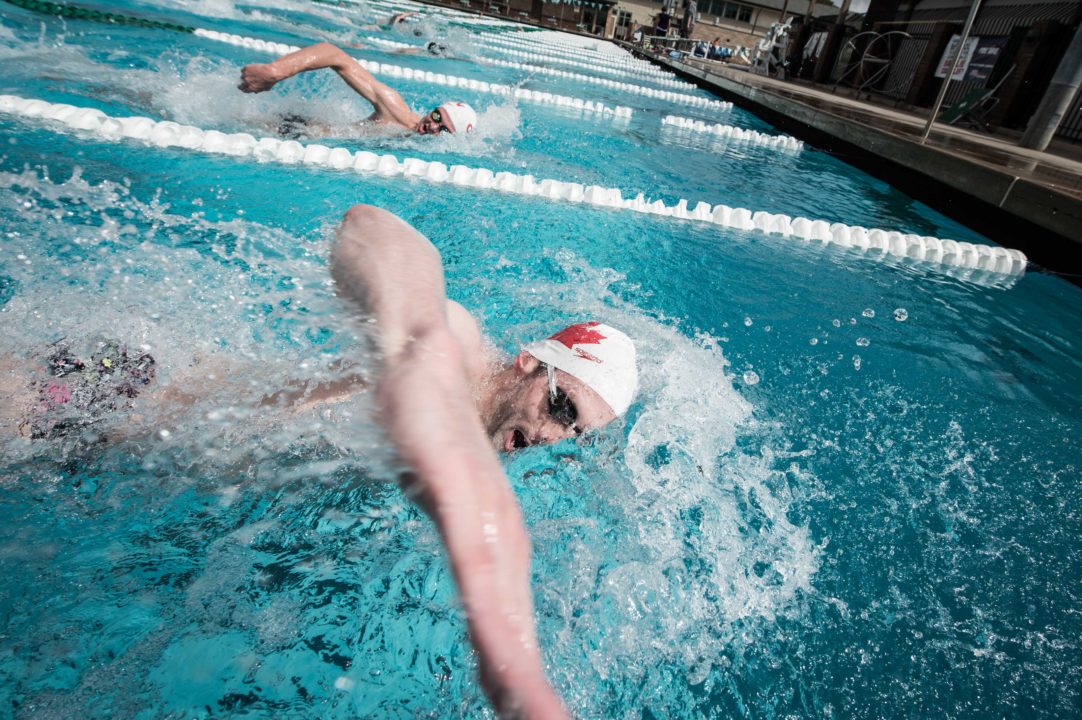 Canada's Ryan Cochrane swam to his third freestyle medal in as many starts in the Mare Nostrum Series, with a silver in men's 400 metres on Saturday. Current photo via Mike Lewis/Ola Vista Photography

At Monte Carlo, Cochrane went stroke for stroke with South Africa’s Myles Brown and Germany’s Florian Vogel, who each have top-10 400 freestyle times this season. Ultimately, Brown prevailed in three minutes 47.96 seconds. Cochrane, the 26-year-old Victoria, B.C., native, finished in 3:49.40 to take second place by a quarter-second ahead of Vogel at 3:49.67.

Elsewhere, Audrey Lacroix of Montreal had her second fourth-place result in women’s butterfly in as many days at the Sette Colli meet in Rome, Italy. Lacroix, 31, narrowly missed the podium in women’s 200-m butterfly, finishing in 2:09.26. Cammile Adams of the United States took gold in 2:07.52.

“My time is not bad, but it’s been a tough race,” said Lacroix, who was fourth in the women’s 100-m butterfly on Friday when Sweden’s Sarah Sjostrom threatened the world record, winning in 56.04 (.06 shy of the mark).

“This is my third competition in nine days in Europe and I had only participated in the B finals so far,” Mainville said. “I’m happy to have reached the final today.”

Also at Mare Nostrum, Kierra Smith of Kelowna, B.C., was fourth in women’s 100-metre breaststroke, touching the wall at 1:08.99. Japan’s Kanako Watanabe prevailed in 1:07.19, followed by Denmark’s Rikke Moller-Pedersen (1:07.44) and the United States’ Micah Lawrence (1:07.89). The result might be a good omen for Smith, who is competing in her specialty 200-m breaststroke on Sunday.

“I was really happy – I’m getting close to that season-best time I had at [National Team] Trials and that feels pretty good,” said Smith, whose Pan Am Games debut is a little less than one month away. “It’s exciting for tomorrow, because I’d like to go out that much faster. To race the best in the world, I’m going to need that speed and I am going to try to do it again.”

Sixteen-year-old Mary-Sophie Harvey furnished another Canadian highlight. The Montreal-based teenager swam in her second A final of the Mare Nostrum Series, finishing eighth in women’s 200-m backstroke in 2:17.95. Harvey clocked a season-best 2:16.88 during morning qualifying.

“Considering that this is the last meet [of the series], I was really happy to do a best time in the morning,” Harvey said. “During the final, my last 50 metres was good. I was able to pick up the stroke and that was what I wanted.”

Mackenzie Darragh of Oakville, Ont., cracked the men’s 200-m butterfly final, finishing eighth in 2:02.34. Japan’s Daiya Seto set a meet record whilst winning in 1:54.68. Darragh made the final in a field that included four Canadians.

“My swim in the morning was really good,” said Darragh, 21, who will compete in men’s 100-m butterfly on Sunday when the Mare Nostrum concludes. “I was on my stroke and felt like I could go a lot faster at the night. I think I just got a little too excited and nervous at night. The warmup was shorter than we thought it was going to be, so there were some circumstances.

“Overall, given that, I’m happy with my swim tonight. Of things that I’ve improved in the past few years, one is having better morning swims because the competition I’ve had has forced me to do so.”