Rutgers Women, Columbia Men Each Pick Up A Win at Bucknell 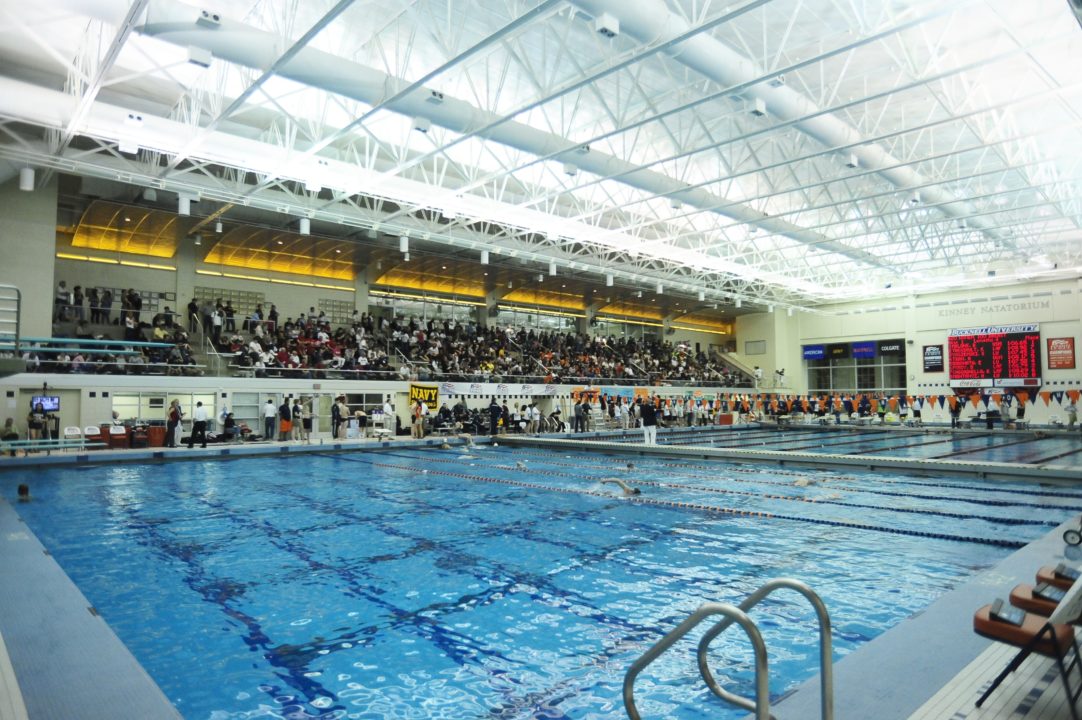 Bucknell men's team played host to Columbia over the weekend, while the women took on Rutgers in their home pool. Both teams fought hard but came away short of the win. Recap below. Stock photo via Bucknell Athletics 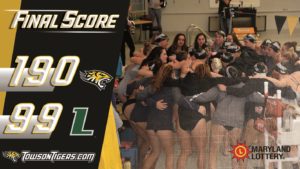 Kinney Natatorium was the scene of a double dual meet on Saturday when the Bison Men took on Columbia and the Lady Bisons hosted Rutgers. Both Bucknell swimming and diving teams had been off to strong starts for the season with 5-1 overall and 4-0 Patriot League records, highlighted by wins over Navy and Colgate. Not only was it the men’s team first triumph over the Midshipmen, but it was Navy’s first ever Patriot League dual meet loss. The women’s victory over Navy was its first since 2005-06 and the Colgate win was its first since 2004-05.

Harry Stephenson of the Columbia Lions kicked off the individual events with a win in the 1000 free in 9:40.27. Bucknell’s Brian Phillips was second, while Columbia’s Jack Foster was third. Columbia widened their lead with 1-2-3 sweeps of the 200 free and 100 back. In the former, Terry Li (1:43.59), Alex Mango, and Nikita Bondarenko all touched before the first Bison, Hadley. In the latter, it was a battle among Lions Ben Xu (51.86) Thomas Norman, and Fox-Moles for first; Bucknell’s Jack Robinson finished fourth.

In the 100 breast Wong (57.48) and Codi Saunders of Columbia took first and third, but Bucknell’s Seketa was only .22 behind Wong for second. The Bisons’ Nicholson took the 200 fly out nearly two seconds faster than the rest of the field and managed to hang on for the win (1:48.18, only .10 off his school record), despite a hard-charging last 50 from Columbia’s Kevin Quinn. Quinn’s teammate Drew May took third.

In the 50 free it was Ngan (21.24) and Philipp Gaissert of Columbia with the 1-2 finish, with Bucknell’s Grune right behind them. Eric Traub of Columbia won the 100 free in 46.89. Hadley and Grune of Bucknell followed closely in second and third.

There was excitement in the 200 back as Norman of Columbia and Jack Robinson of Bucknell flipped at the 150 with exactly the same split. Norman was able to finish .24 faster and thus claimed victory in 1:53.57. The 200 breast wasn’t nearly as close: the home team took the first two spots with Nicholson (2:05.95) and Seketa; Columbia’s Ronald Chen touched seven seconds later.

The Bisons had the top three finishers in the 500 free: Phillips (4:43.59), Denver Freeman, and Collin Greene. Freeman had a very strong final leg and got to the wall just .07 ahead of his teammate Greene. The top scorer for the Lions was James Delgado.

Columbia’s Micah Rembrandt took the one-meter diving, while Tyler Wenzel and Jon Jones of the Bisons were second and third, respectively. Rembrandt doubled with a win in the three-meter. He was followed by Wenzel in second and Columbia’s Derek Kim in third.

The Lady Bisons quickly made up points by taking first and third in the 1000 free with Kelly Pontecorvo (10:25.27) and Melissa Besman. Rutgers’ Brogan Lee was second. The 200 free featured Scarlet Knight teammates Moser (1:54.01) and Pfaff finishing a second in front of Bucknell’s Rachel McGoff.

Wu of Rutgers won the 100 back in 56.62; Lady Bisons Levendoski and Rachel Perry touched second and third, respectively. The Scarlet Knights swept the 100 breast as Leberfinger (1:04.50), Allyson Perrotti, and Stoddard all came in ahead of Diana Hanson of Bucknell.

Rutgers’ Guinee claimed the 200 fly; second and third went to Bucknell’s Amber McDonnell and Purdy, respectively. In the 50 free it was Moser of Rutgers in 24.17, followed by Utkewicz of Bucknell and Newton of Rutgers. Utkewicz avenged her second-place finish in the 50 with a win in the 100 free in 53.98, just .13 ahead of Rutgers’ Sarah Coyne. McGoff of Bucknell was third.

Scarlet Knight Wu doubled up with a victory in the 200 back (2:02.59). She was followed by Levendoski of Bucknell and Pfaff of Rutgers. The Rutgers breaststrokers did it again in the 200, going 1-2-3 with Leberfinger (2:21.50), Stoddard, and Perrotti. Bucknell’s Meg Lattimer was fourth. Wu scored a hat trick for Rutgers by winning the 500 free (5:02.38) in a stunning come-from-behind victory over Bucknell’s Pontecorvo and Stephanie Koziol.

Moser of Rutgers scored her second individual win of the meet with a 56.66 in the 100 fly. Second and third went to Bucknell teammates Purdy and McDonnell. The same pair of Lady Bisons were at it again in the next event, the 200 IM. This time McDonnell touched ahead of Purdy, but both were beaten by event winner Pfaff of Rutgers.

First through third diving points went to Katie Hetherington of Bucknell and Nicole Scott and Alyssa Black of Rutgers, respectively, in the one-meter, and to Scott, Hetherington, and Bucknell’s Tara Boyle in the three-meter.