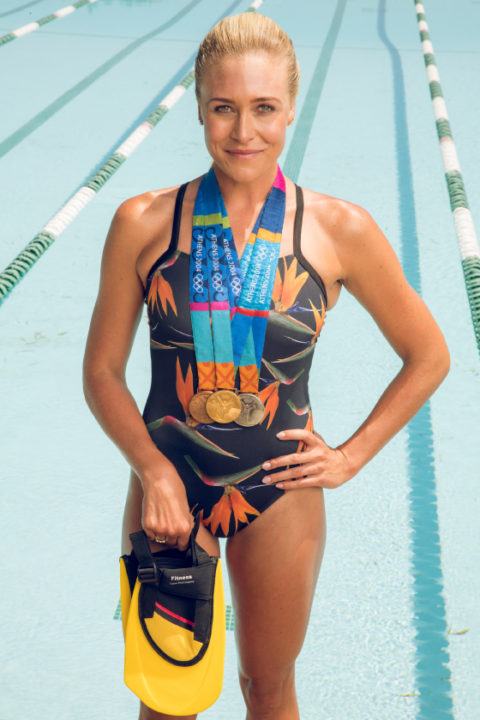 The book will be out July 15th, 2019 to coincide with the ramp up to the Tokyo Olympics, and is available for pre-order now ​HERE​, as well as on Amazon and all major online retailers.

Written by Dan D’Addona and Sandeno, ​Golden Glow
​ tracks Sandeno’s journey qualifying as a teenager for the 2000 Olympics, becoming arguably the face of the 2004 Games, all while collecting four Olympic medals including breaking the final East German World Record on the books en route to gold. Sandeno brings us into her triumphs, setbacks, and how all of her experiences culminated into who she is today.

Now as an inspirational spokesperson for The Jessie Rees Foundation, the go-to host for a slew of events, motivational speaker, model, and recently named GM of The International Swimming League’s DC Trident, Kaitlin reflects on her life’s work to date and where it has brought her. Says Sandeno, “Every moment and every person in my journey, I am grateful for. The highs were so high and the lows got pretty low, but I would not change it for anything. I take great pride in using those setbacks as examples and motivation or inspiration for others.”

Adds D’Addona, “When we started this project, it was going to be a book reflecting on Kaitlin’s swimming career, but it quickly became so much more. Kaitlin has an amazing story as a swimmer, but her journey reaches new levels with all that she has accomplished out of the pool, using her platform as an Olympian to continue to help and inspire others and remain a beacon for her sport.”

Says Sandeno, “It has been such a thrill being on the other side of the sport. I get such a rush being on camera highlighting this generation’s swimming sensations. With my new role as GM of DC Trident, I’m so excited to be supporting the next era for our sport and beyond. Swimming is not only is stacked with world class athletes but just really good human beings that are incredible role-models and ambassadors. And to me, that’s what it is all about.”

Golden Glow is available for pre-order now ​HERE​, and will be available in bookstores this summer on July 15th.