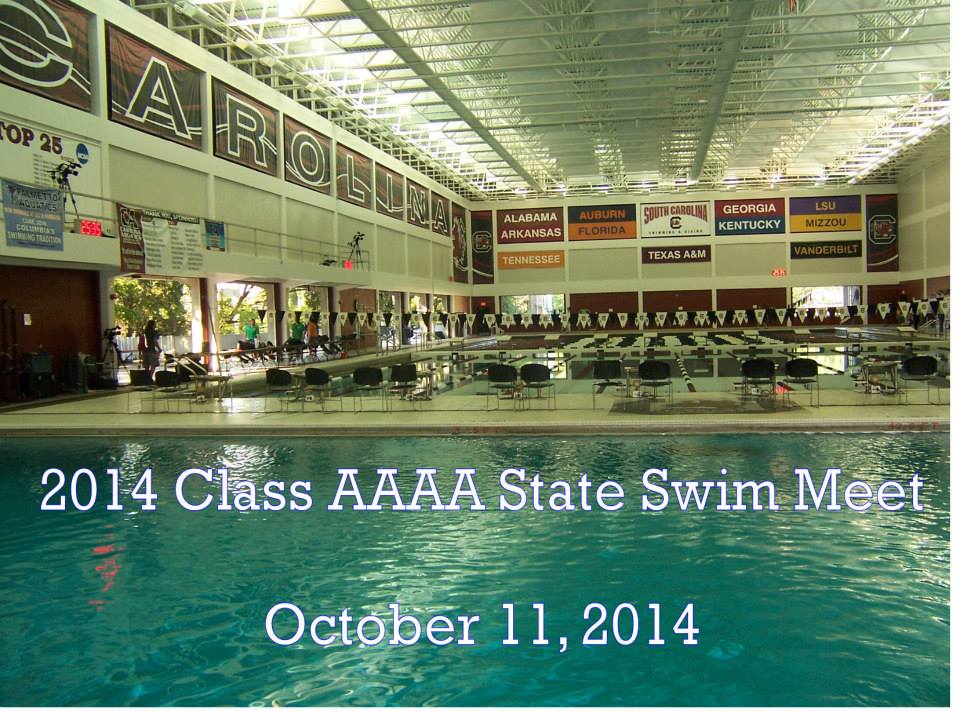 Riverside High School in Greer, South Carolina, swept the boys and girls titles at the class 4A state meet on Saturday.

The meet couldn’t have begun on a much more exciting note than a girls 200 medley relay in which the top three times all touched within a half-second of each other. Riverside (Madeline Reilly, Jessica Horomanski, Maegan Rudolph, and Bay Prewett) won with 1:47.71, 20/100 ahead of Fort Mill (Erynn Black, Meg Wiggins, Madison Coughlen, and Madison Little), who were 31/100 in front of JL Mann (Ali Galyer, Savanna Faulconer, Lillie Anderson, and Marta Zwolski).

Faulconer, also of JL Mann, won the 200 IM in a tight contest with Riverside’s Jessi Snover. Faulconer was out first in the fly but gave up a full second to Snover in the back. A strong breaststroke leg put Faulconer back on top, where she stayed through the finish, winning 2:02.14 to 2:02.74. Faulconer went on to win the 100 breast in a new meet record of 1:04.01, eclipsing the mark set last year by .77.

The boys’ meet began with a Fort Mill victory in the 200 medley relay, despite a blazing breaststroke leg from Riverside’s Nathan Delahunty that put them out front before the fly. In the end, Fort Mill (Jacob Kohlhoff, Lucas Fairbanks, Zach Piedt, and Ben Fenwick) touched in 1:37.58, winning by a fairly comfortable margin. Jackson Seith anchored Fort Dorchester (Dominic Carelli, Ballard DeHaven, Noah Brazier, and Seith) to second place, pulling ahead of Riverside (Kyle Burke, Delahunty, Noah Cignarale, and Brandon Meier) at the end, 1:38.76 to 1:39.16.

Sweezer made it up in the 500, though. More comfortable in the longer event, he set his pace early on and just kept building his lead with every 50. Sweezer won with a personal best 4:35.24. Kohlhoff was second in 4:40.21. Third place went to Heyward Brown of JL Mann, who touched in 4:45.72.

Riverside’s Delahunty won two individual events: 200 IM and 100 breast. He led wire-to-wire in the IM, although Bluffton’s John Evans gave him a run for his money on the middle two legs. Delahunty took first in 1:55.48, Evans was second with 1:56.37. The race for third was exciting, with Brice Beverley of Clover holding off a great freestyle leg from Wade Hampton’s Kevin Crumley to win 1:59.10 to 1:59.18. Delahunty won a very close one in the 100 breast, coming back from .35 down at the 50 to out-touch Wando’s Nick Wukovits, 59.96 to 1:00.02. Brian Loos of River Bluff also had a nice second half but he just missed catching Wikovits and had to settle for third with 1:00.07.

Rock Hill’s Bagwell earned a first-place finish with his 51.52 in the 100 back. Michael Manucy of TL Hanna touched second in 51.98, while Riverside’s Kemp rounded off the podium with 52.52.

In the 3a championship later that day Christ Church won the championship and Katrina Konopka of St. Josephs broke long standing state records in both the 50 and 100 free events and became the first swimmer (boy or girl) in South Carolina swimming history to win two different events in the state meet 4 times.