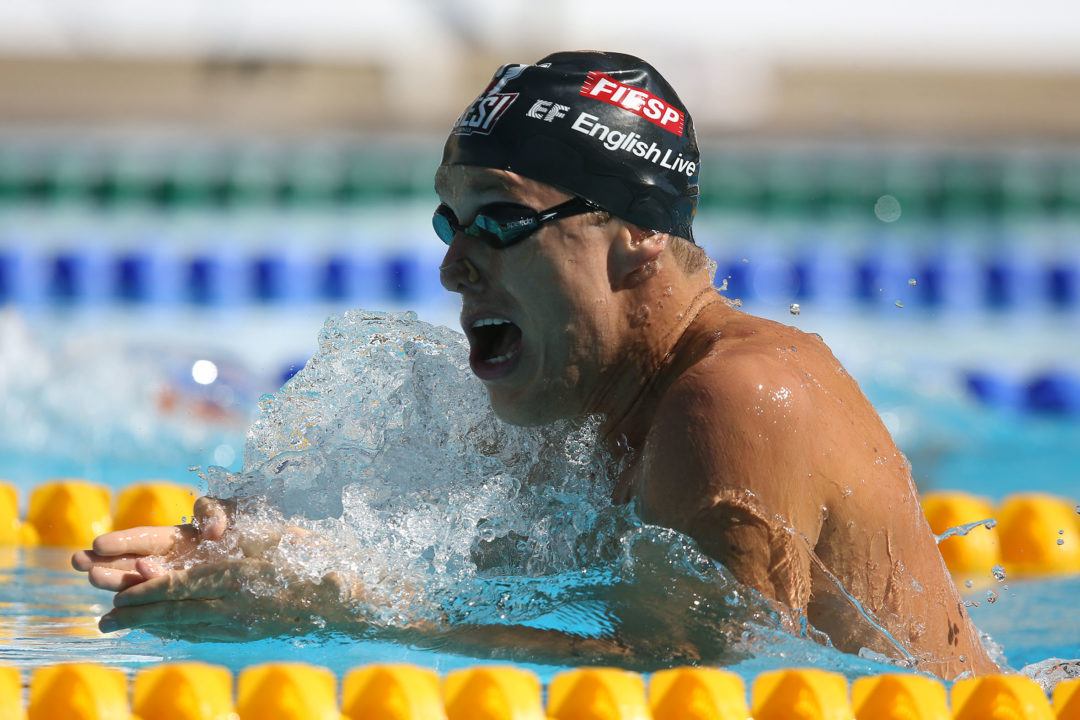 Three-time Pan American gold medalist and Rio 2016 semi-finalist Henrique Rodrigues of Brazil has tested positive for the anabolic steroid clostebol, found in his system in a surprise test conducted by FINA in March.

Sample ‘A’ showed the presence of the substance, and the ‘B’ sample, released on Thursday at the Frappier Institute in Montreal, confirmed it.

Clostebol is in the S1 category of the World Anti-Doping Agency’s (WADA) banned list, under Anabolic agents, though it is a weak anabolic steroid with no direct influence on performance. This is the same thing that long jump Olympic gold medalist Maurren Maggi tested positive for, and ultimately earned her a 2-year suspension.

Rodrigues also had tests conducted before and after the test in March that came back negative, and the amount found in the positive test was miniscule (0.1 nanograms with two metabolites). Clostebol is commonly found in healing creams used for cuts, and with such a small amount found in Rodrigues’ system, it is possible he may have simply been in physical contact with someone who used a product containing it. According to the report, several analyses were required to find remnants of the substance in the ‘B’ sample.

The case will now be analyzed by the FINA doping panel. Rodrigues will be represented by Thomas Mattos de Paiva, one of the top defense attorneys for doping cases in the country.

After taking an extended break after the Games, Rodrigues failed to qualify for the 2017 World Championship team. He placed 7th in the 200 IM at the Maria Lenk Trophy in 2:02.56.

Perhaps this can be the opportunity to bring back Thiago Pereira who was forced to retire! Perhaps he can qualify for 2020 and be reunited with Ryan Lochte in Toyko!!

Gasp a Brazilian cheating…the auburn team would be so proud!

So did anyone else read this headline hastily and at first think it said: “Rodrigues Tests Positive for Cholesterol”?

Micro dosing steroids would only harm your performance

Everybody that finished ahead of him is totally clean, you guys.

That logic relies on all athletes starting at an equal level of talent, opportunity, work ethic etc. I take your point, but it’s a pretty silly way to make it. Some ahead of him may well – It is perhaps even likely that someone ahead of him doped – But, the logic you’ve used is far too basic for the complexities of doping in sport.

Just cause you take drugs and don’t succeed doesn’t mean the people ahead of you do, if we follow your logic, Brendan Hansen, Eric Shanteau and Mark Gangloff all doped because they left Sean Mahoney in the dust

I often spout off the “athletes are responsible for what they put in their body” line, but the “may have been in physical contact with someone who used a product containing it” excuse is intriguing. What extent of physical contact is required? If it is true that, say, hugging someone who used a small amount of healing cream 30 minutes prior could cause a positive doping test, that adds another wrinkle. It sounds silly that something so casual and innocuous would cause a positive, but if so, athletes can never confidently high five a fan again for fear of pissing hot.

I doubt it’s that easy, or we’d likely see this come up more often, but I am curious about… Read more »

The question also would be. Who makes the list? If it does not enhance performance why it is banned???

He was done in by the Hugging Bandit!!1!

“I tried to exercise due diligence, I really did, but the Hugging Bandit is just so darn… huggable.”

if it has “no direct influence on performance” why is it illegal?

“Clostebol is commonly found in healing creams used for cuts, and with such a small amount found in Rodrigues’ system, it is possible he may have simply been in physical contact with someone who used a product containing it.”

Nonsense, it was ingested.

Because it can be a very powerful steroid used in conjunction with other drugs. It ‘reacts’. The East Germans & Bulgarians used this drug combined with another steroid, but I can’t remember its name.

Also, there are many substances that are banned not because they enhance performance, but help mask other PEDs

Yep, they’re classed as diuretics though, so don’t think that’s why this drug is banned

I dont buy it. I just dont see how that synergy can work. I’ll bet there is no good science to support that. That said, I think all the science on PEDs is either bad or poorly explained. There was a big news frenzy once about a Stanford expt that supposedly showed that PEDs do not improve athletic performance. That conclusion (or at least how it was conveyed to the lay person) is completely bonkers.