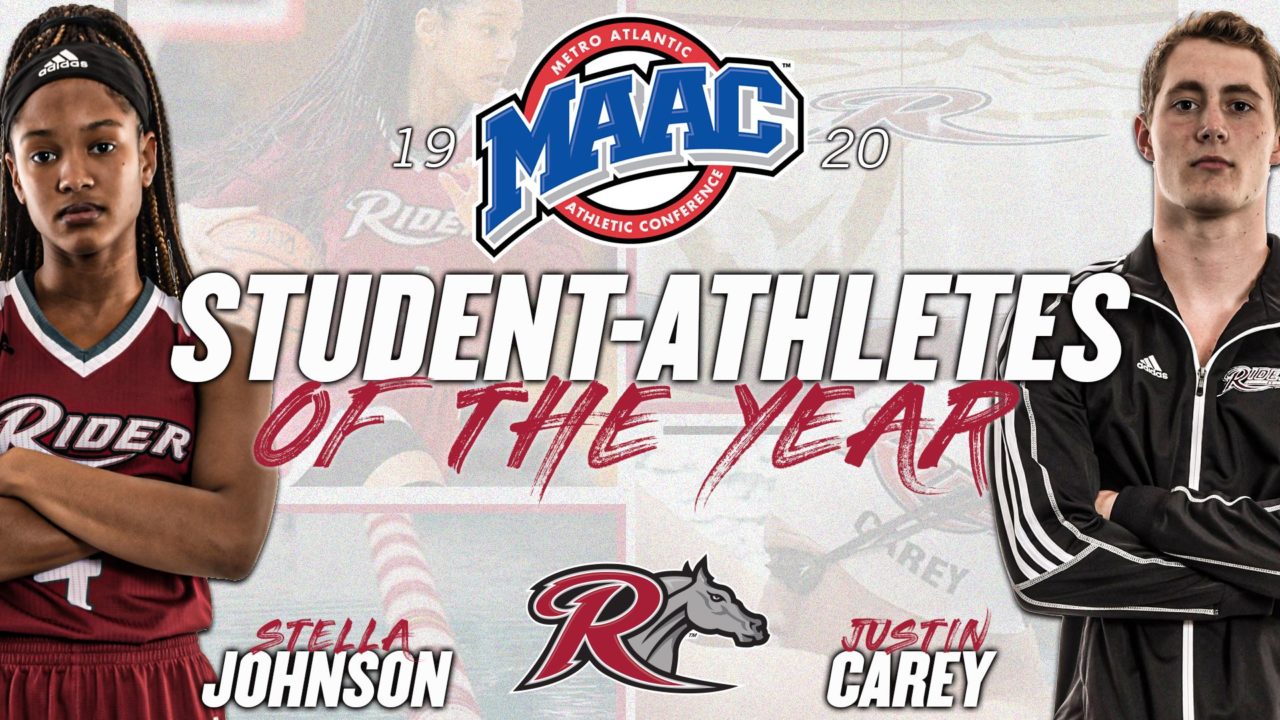 Carey, along with women's basketball player Stella Johnson, mark the first-ever Rider athletes (in either gender) to win the conference award. Current photo via Rider Athletics

LAWRENCEVILLE, NJ – Recent graduates Stella Johnson (Denville, NJ/Morris Catholic) of women’s basketball and Justin Carey (Landenberg, PA/Avon Grove) of men’s swimming & diving have been named MAAC Student-Athletes of the Year, the league office today announced. The awards represent the first-ever for Rider for either gender in the same year that the Broncs took home their first-ever MAAC Commissioner’s Cup trophy.

“The MAAC Student-Athlete of the Year awards for Stella and Justin are so well-deserved and I know I speak for everyone in the Rider community in saying I’m incredibly proud of them,” said Karin Torchia, Rider’s Senior Associate Athletic Director for External Operations and Development. “Each embodies what it means to be a true student-athlete and have excelled in their sport and in the classroom during their entire careers at Rider. To get our first-ever award winners on both sides in the same year as winning our first overall MAAC Commissioner’s Cup shows what a special year it was for Rider Athletics.”

Johnson was also picked a Senior CLASS Award Second-Team All-American. She earned MAAC Player of the Year for the second-straight season, becoming the sixth player all-time to achieve the feat in back-to-back years. She was a finalist for both the Nancy Lieberman Award and Becky Hammon Mid-Major Player of the Year.

Johnson finished the year as the leading scorer in NCAA Division I at 24.8 points per game, more than a point ahead of the next-closest player. She was also the only active Division I player with 2,000 career points, 700 career rebounds, 400 career assists and 300 career steals. In her final game of the season, Johnson set a new league record for a single game, scoring 37 points in the Broncs’ MAAC Quarterfinal win over Niagara. All nine of her double-doubles came against conference opponents, including her Feb. 29 triple-double against Canisius. Besides scoring, she also led the MAAC in steals per game (2.9) and minutes per game (37.1). In the classroom, Johnson graduated with a degree in sports media, posting a 3.56 grade-point average over her four years.

Carey was named 2020 MAAC Championship Most Outstanding Swimmer in leading the Broncs to their ninth-straight MAAC Championship, making Carey part of a “4-for-4” class. He won four gold medals, two silver and a bronze at this year’s league championships and was a seven-time MAAC Swimmer of the Week in 2019-20 and a 13-time honoree for his career. As a senior Team Captain, he earned the Rider University Swimming & Diving John G. Muir III Most Valuable Performer Award. He is the first swimming and diving student-athlete to be named the Men’s MAAC Student-Athlete of the Year in MAAC history.

Carey was a three-time MAAC All-Academic Team honoree and was part of the Broncs’ silver medal winning 200 and 400 medley relay teams at ECAC’s in 2019-20. He won three gold medals, three silver medals and a bronze at the 2019 MAAC Championships and won a bronze medal in the 50 back with a time of 21.95 at the CSCAA National Invitational Championships. He was named 2017 MAAC Men’s Rookie Swimmer of the Meet at the MAAC Championships. Carey also performed in the classroom, graduating with a degree in marketing and sports management, finishing with a 3.53 grade-point average for his four years.

“Justin was an exceptional swimmer partially because he had a relentless attention to detail,” said Rider Men’s and Women’s Swimming & Diving Head Coach Steve Fletcher. “Every stroke he took in workout, every transition at every wall and every start was done deliberately and with intention. It takes an incredible amount of mental energy to manage yourself in workout this way with as much time as Justin and his team mates spend in the pool. But he is a technically gifted swimmer and maxed out that strength. Another thing that distinguished Justin’s work ethic was his ability to consistently reach race speed in training. This kind of effort really enabled him to improve over time.”

“Justin responded to the team concept with his competitiveness on relays. If he was in front of a relay leading off with the Backstroke leg, his teammates were confident that we’d have a significant lead to hang on to, and if he were anchoring a relay in the 800 or 400 Freestyle Relays, you knew he could hit the water within striking distance and overtake the competition with an overdrive gear.”

Outstanding! Congratulations to Justin and Stella! Incredible Careers!!! All the Best in the Future!!