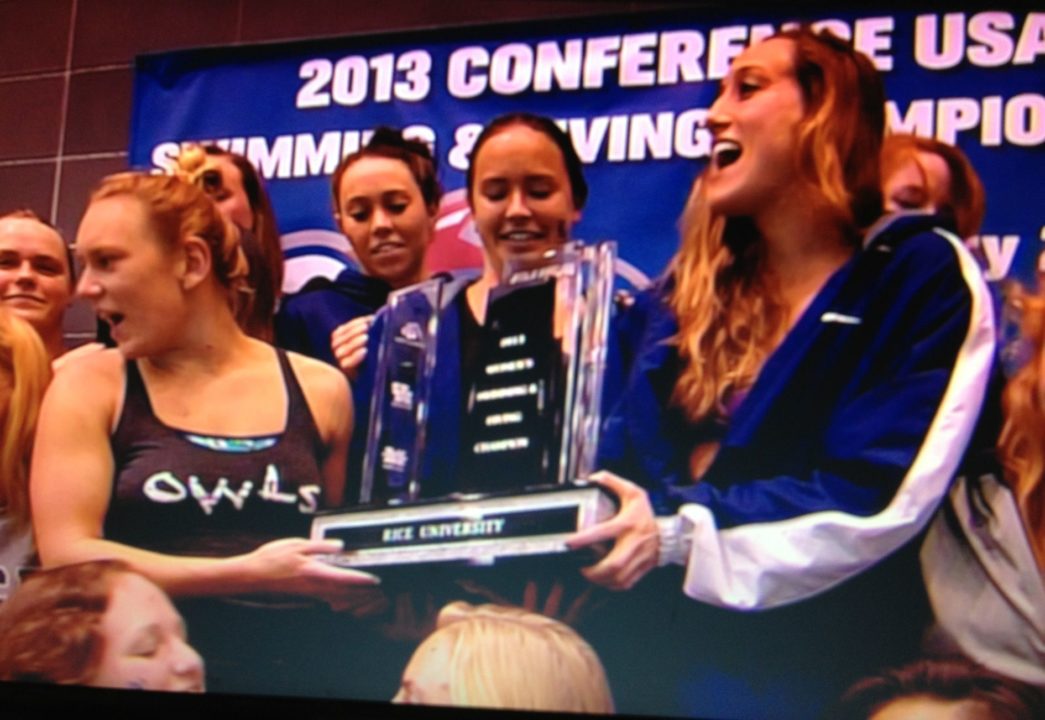 It took 5 days of competition for the SMU Men and the Rice Women to lock down the 2013 team titles in Houston. (Swim Pic Courtesy © Josh Davis)

What a terrific Conference Championship Meet in Houston. Each night saw teams exchanging 1-2 finishes and 1-2-3 knockout punches. The team points lead changed hands seemingly event by event, and Saturday night was no exception.

Rice took the lead with a 1-2 finish in the Women’s 1650 with Sophomore Erin Flanigan winning in 16:29.02 and her junior teammate Quincy Christian touching 2nd with a 16:33.48 just in front of Houston’s Heather Winn who was huge for the Cougars in the pool earning her 3rd top 3 finish of the meet with a 16:35.91.

On the men’s side, a trend took place with the first two individual events of every finals session going to the Hilltoppers of Western Kentucky. It started on Saturday with freshman and 500 free champion Aymeric Le Corno taking the Men’s 1650 in 15:16.14 and was backed up by a 1-2 finish by the Hilltoppers in the Men’s 200 Backstroke with Senior Adam Dajka running down and touching out Sophomore Seth Musser 1:44.82 to 1:44.87. On the live results it says that WKU trailed SMU after the 200 back, but as the events occurred in realtime the platform diving was not yet scored and the men of WKU actually had a lead at this point in the session.

In the Women’s 200 Backstroke SMU did their best to get back in a meet that seemed to slip through their fingers, starting on night one with a devastating DQ in the 200 Medley realay. The Mustangs started off their big move with a 1-2-3 in the 200 back lead by Sophomore Star Isabella Arcila whose winning time of 1:55.86 secured her 3rd individual title of the meet. Deanna Matthews and Anna Volchkov followed her up with 1:57.54 and 1:58.75, respectively.

In the Women’s 200 Fly Rice sophomore Casey Clark put up the performance of the night for the eventual champs, setting a new meet record in route to victory with a 1:57.35.

When it came down to it in the men’s race, it was the divers of SMU that cemented the victory. On the final night Devin Burnett and Hayden Hodges went 1-2 on the platform.

Final Scores for the Men:

Final Scores for the Women: