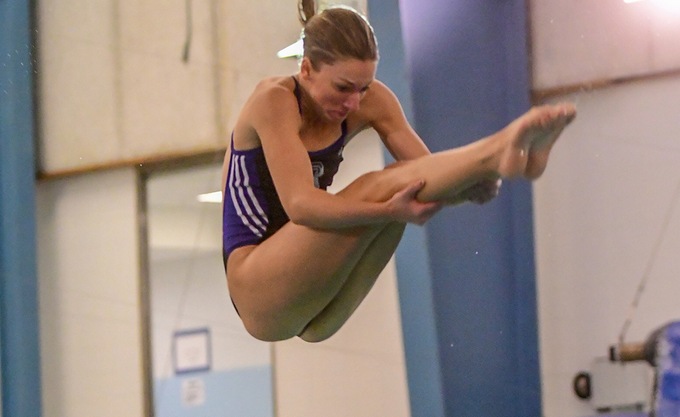 SPRINGFIELD, Mass. – All-Americans Joe Rodriguez and Eric Fuhs each won two individual events and were part of a winning relay leading the Bears to a 180-107 season opening win over host Springfield.

The Bears are back in action on Friday night at Wheaton at 6:00.

Springfield, Mass. – The Springfield College women’s swimming and diving team split a tri-meet on Saturday afternoon in Art Linkletter Natatorium.  The Pride prevailed over Coast Guard, 175-125, and dropped a 179-116 decision to the University of Rhode Island.

On the three-meter board, Bailee Carey (Quincy, Mass.) finished as the runner up with a mark of 234.60.

Springfield ended the meet on a high note after Charlemagne, Amelia McKenzie (Charlton, Mass.), Ripp, and Magee won the 200 free relay in 1:39.88.

On Tuesday, November 5, Springfield will host Smith at 7 pm.

The Springfield College men’s swimming and diving team opened up the 2019-20 campaign and was bested by visiting Coast Guard, 180-107, on Saturday in Art Linkletter Natatorium.

On the diving boards, Luca Brashear (Amherst, Mass.) won the three-meter with a score of 284.60 and also claimed first-place points on the one-meter with a 262.45.

In the final event of the afternoon, Chan, Dominic Marco (Bath, Maine), Jensen, and Harnish combined for a 1:30.43 in the 200 free relay.

Springfield will host both MIT and Trinity on November 9 at 1 pm.

Rhode Island won 11 of 15 events, including total dominance in the diving events. In the 1-meter dive, freshman Marta Baumann led a 1-2-3-4 finish for the Rams. Senior Alyssa Campone, senior Katy Evans and sophomore Fallon Pfeifer led Rhody, which claimed six of the top seven spots in the event.

It was Evans winning the 3-meter dive, followed by Springfield College junior Bailee Carey. The next six finishers were Rams, as URI again took six of the top seven scores.

What’s Next
The Rams open the home portion of their season when they host Providence and Sacred Heart at the Tootell Aquatic Center on Wednesday, Nov. 6. The meet begins at 6 p.m.