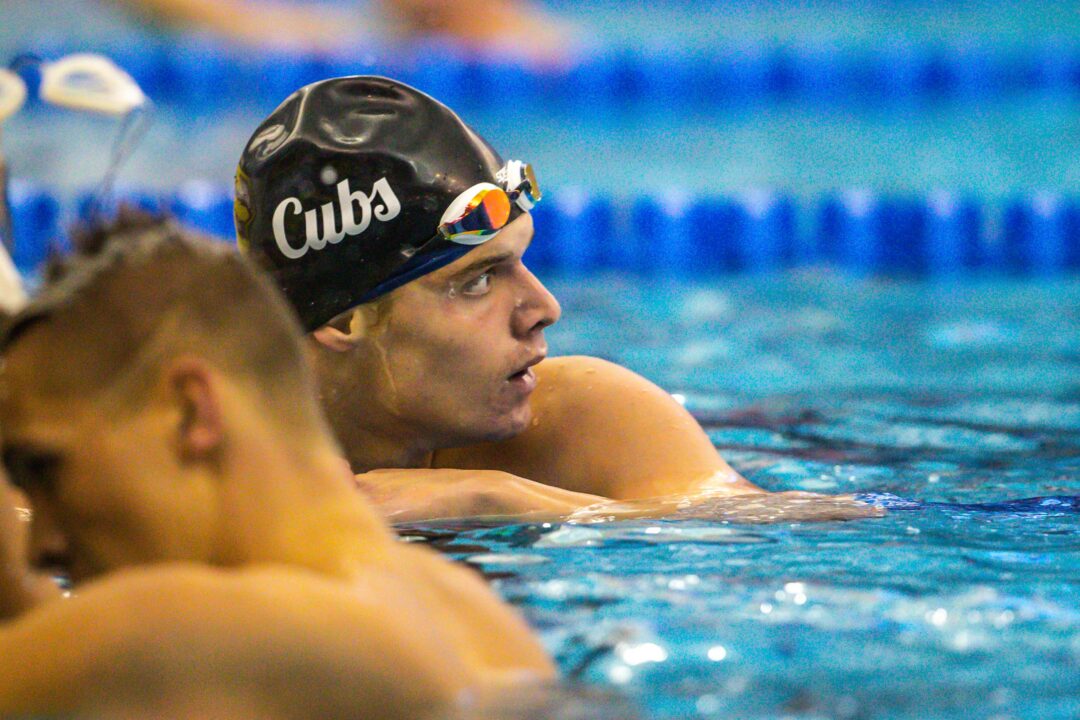 The CIF championship meets are underway throughout California, featuring staggered sessions for each of the 4 divisions over the course of the week. This post will be centered on the Division I prelims session, which took place on Monday in El Cajon. Finals for DI will take place tomorrow, Friday the 6th.

Among the notable swims in the prelims session was St. Margarita sophomore Ramon Jiang, who led his team’s 200 medley relay off in a speedy 22.75. The swim marks a huge personal best for Jiang, whose previous top time was a 23.40, which he swam this past December at the 2021 Speedo Winter Junior Championships West. Just a sophomore, Jiang posted the 2nd fastest backstroke split in the field, behind only Loyola junior Max Cahill‘s 22.58. Additionally, St. Margarita’s medley relay is very young, featuring no seniors. Jiang was followed by junior Keller Morgan, who split 25.58 on breast, then sophomore Daniel Verdolaga with a 22.35, and another sophomore, Hunter Cehelnik, who anchored in 20.69. St. Margarita led prelims in the event, clocking a final time of 1:31.37.

An exciting race is developing between Corona del Mar junior Margaret Schalow and St. Margarita senior Justina Kozan in the girls 200 free. Schalow led prelims, swimming a 1:47.38, with Kozan right behind in 1:47.60. The pair were the only girls in the field under 1:50 in prelims. Kozan has a bit of an edge in the final, as her personal best stands at 1:44.40, however, she just got back from racing at the U.S. International Team Trials this past week, so it’s possible Kozan isn’t in peak performance condition right now.

St. Margarita freshman Teagan O’Dell blew away the field in the girls 200 IM, putting together a very strong prelims performance of 1:57.58. As just a freshman, Just a freshman, O’Dell stands a chance of taking down the CIF Division 1 Record of 1:56.07, which was set in 2015 by Kirsten Vose. O’Dell has a personal best of 1:56.11.

Wait so prelims is Monday, finals is Friday? That’s bizarre

No prelims were on Wednesday for D1.

I noticed that St. Margarita girls had none of their top 4 50 swimmers in the prelim 200 free relay. Based on their swims this morning could we see the Carmel national record go down? 22.68 is the average so I think it’s doable. Lots of young swimmers on these teams so will be crazy to see what they can do in the next couple years.

I’m not sure that St. Margarita girls had their top 4 swimmers in ANY of the prelim relays? We could definitely see some records fall

Has he committed yet?

Don’t think he has as of yet

Stanford, USC, and Amherst are in the lead

Liberal Arts education could be a good shout for the kid.

He’s Stanford for sure

Amherst? What’s the story there?

Great to see a NESCAC school in the mix!

Where tf did amherst come from?

O’Dell surprise me since she had problems at world trials. Rex I was not surprise since he has been pretty fast. Mission Viejo probably got a kick out of hosting this.