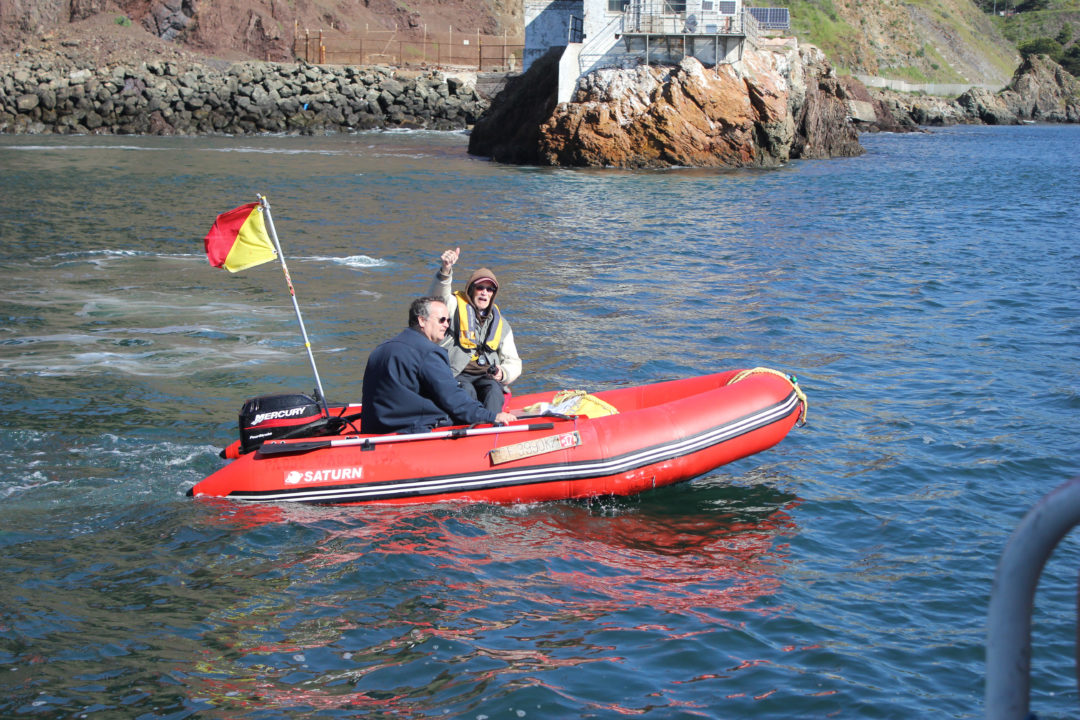 Bob Roper of San Francisco leaves behind a legacy of courage, passion, and the ability to escape one's limitations. Current photo via Lisa Fratesi

University of Pennsylvania swimmer Matt Fallon won the 4.4 Mile swim at the Great Chesapeake Bay Swim on June 12th in his first race since NCAAs.

The first thing I noticed about Bob Roper were his hands.  Long, brown fingers were home to scars, wrinkles, and sunspots from years of swimming and rowing in the San Francisco Bay. While the appearance of his hands revealed his age, the dexterity of their movements conveyed the image of a man who exuded energy, power, and passion.

It is thanks to those hands that I have been able to participate in some of the most rewarding experiences of my life. Each year, myself and dozens of other swimmers participate in the annual Foundation for Aquatic Safety and Training (FAST) Alcatraz and Golden Gate Bridge swims in the San Francisco Bay. Bob Roper’s hands were the ones that held the radios, signed the paperwork, drew the maps, pointed swimmers in the right direction, and shook mine upon my emergence from the water.

Bob Roper died on September 27, 2018 at age 79 due to preexisting health conditions. His life touched the hearts of countless others, not only in his native city of San Francisco, but from all over the world. Bob Roper is the legendary “Godfather of Bay Swimming.”

Before Roper’s hands sliced through the water of the San Francisco Bay, they were catching footballs. Roper’s experiences with the bay did not start in the water, but rather on the land. A stellar football player and a less-than stellar student, Roper attended community college to play football on an athletic scholarship, his primary focus in school being the game.

A sudden and devastating knee injury devastated Roper’s career. He transitioned from running on the field into doing exercises with a physical therapist, one such exercise being swimming. A young man whose dreams had seemingly be destroyed soon found a new light within the dark depths of the San Francisco Bay.

Roper’s first swims represented hope. After his work with the therapist was complete, Roper joined the San Francisco Olympic Club in order to garner access to the pool, ultimately becoming the club’s swim commissioner. Roper often proclaimed, “Anything worth doing is worth overdoing”, and he set multiple records at the Olympic Club, including swimming 214 miles in just two weeks. However, Roper quit his position out of anger when handball dignitaries took down the swimming trophy case in favor of a handball award. The water was Bob’s new home, and he was not about to let anyone disrespect it.

After his career at the Olympic Club ended, Roper set his sights on a new goal. He was a third generation San Franciscan, and his family had a rich history in the bay. His grandfather delivered mail by rowboat from to Mile Rock on the South end of the Golden Gate Bridge, and Roper’s father completed the swim from one end of the bridge to the other in 1917 and 1919. Bob wanted to complete the journey too.

In 1967, Bob Roper joined the South End Rowing Club, where he became a respected member of one of San Francisco’s oldest and most prolific open-water swimming clubs.  He trained for his shore-to-shore swim of the Golden Gate Bridge with an athletic trainer, who pushed him through interval-training, a type of swimming that he had never before attempted. As Roper trained, he would proudly proclaim, “Only the bold swim in the cold” and, “Only a fool swims in a pool” whenever anyone challenged his ability to complete the swim.

Roper’s open water swimming career did not end there. He swam Waikiki, the Maui Channel, and the Farallon Islands among other famous swims. He also organized the South End Rowing Club Sunrisers swimming program, which allowed athletes to swim in the bay for free before work. Despite his familiarity with the bay, Roper always respected its power, often saying “As soon as you think you can conquer the bay, Mother Nature flexes her muscles and lets you know who’s in charge”.

Not only did Roper accomplish these incredible achievements, but he also helped other swimmers achieve their own incredible achievements, along with his best friend, Paddy Peyton. Peyton describes his meeting with Bob as a life-changing experience.  Despite meeting Bob a couple of times in passing at the South End Rowing Club, Peyton established their relationship when Bob was in the hospital twenty one years ago. Peyton had dressed up in a Pooh Bear outfit to visit sick children before making a surprise visit to Roper, “I thought I was just doing a kind gesture for a lonely old man. Little did I know he would be the greatest man I ever met.”

Roper and Peyton worked together as a trainers for athletes who sought to complete challenging open water swims, such as the Alcatraz, Waikiki, and English Channel swims.  Roper was a tough coach, and he pushed his athletes to escape their limitations, one of his favorite lines being, “Stop yappin’ and make it happen!”

One of Roper’s favorite events was the annual Foundation for Aquatic Safety and Training (FAST) Alcatraz and Golden Gate Bridge swims. Each year, 60-100 people (primarily children ages 8-18 from Arizona) complete these swims. The founder of FAST, Joe Zemaitis partnered with Roper in order to organize the swims, and this year marked their eleventh consecutive swims. Paddy Peyton said with a laugh, “If you helped out with his Christmas fundraiser and the [FAST] swim, Bob would do anything in the world for you.”

The concept of children completing the “impossible swim” from Alcatraz to San Francisco brought Roper to tears of joy nearly every year at the annual meeting. This year was the first year that the group completed the swim without Bob’s guidance, and the swims will be dedicated memorial swims to his memory for as long as they continue. Four years ago, Bob Roper said, “These swims used to be the highlight of my year. Now they are the highlight of my life.”

During Roper’s final stay in the hospital, his good friend Randy Brown visited. Roper  had a pacemaker, a hip replacement, and a stomach issue that he had been keeping a secret from his loved ones. Roper said that he knew he had been on borrowed time for years, but that the most important thing after his death would be for Brown and Peyton to keep the FAST swims going. That day, Randy Brown took Roper to the other side of the hospital where there was a view of the Golden Gate Bridge. Roper, who had been almost unable to move for days, nearly ran to the other side of the hospital and peered out at his beloved Golden Gate Bridge with a smile on his face. Bob Roper died that same night.

Bob Roper changed the lives of thousands of people, including mine. Thank you, Bob.  Thank you so much.

All I can say is “NUT CRACKER SWIMS”, if you don’t know…..you don’t know what you missed. Point Bonita, Richmond bridge to Mcnears Beach, Bridge to Bridge , RTA. Never had enough pilots but we did them. Thanks BOB

What an amazing and well written article! Bob Roper truly touched so many lives and we are so fortunate to have known him. I can not express enough how thankful I am for our paths crossing and all he has done for us! Thank you to Isabella for bringing back such wonderful memories of Bob and such great swim memories in the Bay!